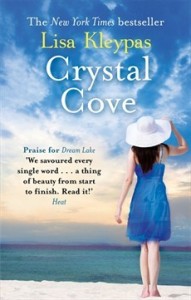 The biggest thing missing in this book was why/how the two fell in love but it’s one of the most romantic stories I’ve read and the caretaker alpha character archetype is taken to a new level of sensuality.  Yes, this is the Kleypas’ bondage book, Japanese style.

Justine Hoffman is the daughter of a witch.  Her mother has never been able to completely settle down and the adult Justine has made a home for herself on the island of Friday Harbor.  There she owns a successful inn and a small cottage on the shore.  She has close friends, and, access to the coven that her mother belongs to.

Justine longs for one more thing and that is love.  She’s tried but has been left time and again.  Somehow Justine learns that a geas has been cast over her, never to know love.  Justine takes it upon herself to cast off that curse but exposes herself to possibly something worse: killing the person she loves the most.

Jason Black is exploring Friday Harbor with the idea of building a commune of his own, only this one is devoted to the elevation of science and technology.  Black is the owner of a multi billion dollar RPG game software company. One of his most successful programs reminded me a bit of BioShock were morally right decisions are rewarded.  Jason is searching for a soul.  A real, actual soul.  He knows he is soulless and believes, based on research of his assistant, that Justine’s spellbook might be the answer to his problems.  As a man without a soul, he is doomed to a shortened life.

“Allergic to curses, more like. Clive knew the risk, marrying Bean. Everyone knows about the Fiveash women. Black widows, all of ’em.  They can’t help it.  You mate one and then you die.”

“Why did Clive marry Bean, if he knew about it?”

“Bean was a looker in those days, and Clive went crazy over her. Said he had to have her, curse or no curse.  No one could take sense into him, not even Bean.  He was a goner the first time he laid eyes on her.”

Jason and Justine quickly, almost immediately fall in love.  Their conflict isn’t over Justine’s spellbook but the curse that all witches suffer.  Their true loves are doomed to early deaths.

This is an idealistic story with dueling beliefs and values.  Realism is shaped by mental will.  Marigold, Justine’s mother, believes that the geas protects Justine from the keenest injury.  Jason searches for long life but by falling for Justine and being loved in returned, dooms himself to an early death.  Justine searches for love and is willing to risk all for just a taste of it.

To heighten the sense of risk taking, Jason and Justine’s sexual relationship explores the control and trust through Japanese rope bondage or as Justine calls it “extreme macrame.”  While the couple doesn’t profess their feelings for each other, they are strong even from the outset and I ascribed those to some otherwordly force.  Realism is tossed out, remember. The prescribed time in which a couple can fall in love is a mental, and artificial, construct the text seems to say to me.

His past relationships had ended when they became inconvenient or stale.  And each time Jason had gone on his way with the arrogant conviction that love would never get the better of him.

What an idiot he’d been.

Now he knew that it was only love when you knew there could be no end to it.  When it was as inevitable as gravity.  Falling in love, a helpless descent in which the only way to avoid being hurt was to keep going. Keep falling.

The prose in the book was lovely.  There was gentle humor throughout, particularly one scene where Justine accidentally roofies Jason in an attempt to cast a deterrence spell.  While the falling in love part might be missing, everything else that a reader loves about Kleypas’ writing is present – the competent heroine, the tender caretaking alpha, good prose, great dialogue, and, as a bonus, it is very very sexy. B