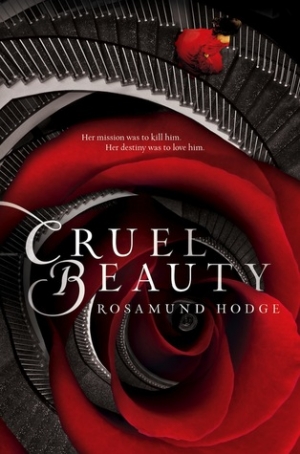 Beauty and the Beast is one of my favorites, so any sort retelling of it is a must buy for me. It also means I’ve read many, and while I don’t mind those that are more standard, I enjoy one that’s different. Yours is one of the more original, possibly because other folktales like Bluebeard and some Greco-Roman landscapes and mythology were mixed in.

Nyx isn’t your average Beauty. For one, she has a mission. She’s been trained from an early age to marry the beast Ignifex, aka the Gentle Lord, then kill him and free her kingdom. Two, she’s smart and tries to keep her goal in mind, even when she’s terrified. She has an agenda going into the Beast’s castle and it isn’t to turn him into a nice husband through love and kindness. She’s mad about the hand she’s been dealt, and she’s planning to make someone pay. (That sounds like a bad Jason Statham movie…)

In the beginning she’s angry but reserved, dutiful for much of her young life, but when the time comes to go cracks start appearing and she starts letting all of it out. She doesn’t want to die. She didn’t want to be chosen. She wanted a normal life and the love of her father and aunt, who pushed her away knowing they’d have to say goodbye someday. So all those feelings are justified in your book. You show us why, and how a normal person would react. She is bitter for a long time, but who wouldn’t be? Most of us aren’t Belle. A lot of us would be Nyx.

The hero in this doesn’t look like a beast except for his eyes. He’s basically like Lucifer: beautiful, wicked, seductive, funny even, and with a really ugly side. He makes terrible contracts with people, can destroy everything, and demands brides from the land so he won’t. Nyx is his ninth. They don’t last long.

But he sees that Nyx is different. Part of their meeting, which is the way much of their relationship runs:

I could feel the knife against my thigh, but it might have been a hundred miles away. And it wouldn’t matter if I had it in my hand. I was supposed to submit to him.

“Hmm.” He leaned closer. “I’ve seen prettier, but I suppose you’ll do.”

“Then my lord husband is an expert?” The words snapped out of me before I knew what I was doing, which was all wrong because I was supposed to be pleasing him, beguiling him.

He’ll like it if he thinks you’re helpless, Aunt Telomache had said.

“Your lord husband has had eight wives before.” He leaned forward, and I could feel his gaze traveling up the length of my body. “But none of them quite”— his hands slid up my skirt in an instant —“ so”— I clenched my teeth, ready to endure—“ prepared.”

And he had pulled the knife out of its sheath. He twirled it once, then threw it up at the wall. It sank in almost to the hilt, lodged in the wall at least twelve feet up.

Then he looked back at me.

This was where I should beg for mercy.

“But just one knife?” he said. “A prudent warrior would carry two. Or did I miss one?” He leaned forward. “Will my lady wife let me check?”

I smashed my fist into his face.

The blow was hard enough that he fell over backward. I caught my breath; even facing the Gentle Lord, my first impulse was to apologize . Then I sprang to my feet, heart pounding, only to realize that the doors were still locked, my knife was beyond reach, and I had probably just doomed myself and my mission.

As he sat back up, I dropped to my knees. There was only one thing to do. I started to undo the top button of my dress, then simply ripped it open.

“I’m sorry,” I said, staring at the floor . “I just, my father made me promise to bring a knife, and— and—” I stuttered, acutely aware that I was half-naked in front of him. “I’m your wife! I burn for your touch! I thirst for your love!” I didn’t know where the terrible words were coming from, but I couldn’t stop them. “I’ll do anything, I’ll—”

I realized he was laughing. “You don’t do anything by halves, do you?” he said.

And Nyx doesn’t. She throws herself into everything with passion and anger and sometimes violence. She piques his interest, and he’s very amused by her. He responds to her attempts with sarcasm (“Well, I’m already hoping there could be a dinner where you don’t try to stab me with your fork,”) and tries to seduce her into betraying her objective. There’s some real heat between them.

There are those who will say “Ugh the relationships in this are unhealthy! It’s a horrible story!” Readers who have this reaction to books with genuinely bad heroes and trapped heroines probably shouldn’t read this, because, well, yeah it’s unhealthy. But the characters in the story were aware of that and made decisions with that knowledge, unlike many books which just pass that detail by. And even though it was unhealthy, it was sexy and I really wasn’t encouraged by this to go out and find a demon to fuck, so I’m okay with this in books and even like it.

But again, like another book I read recently, because he’s so bad, I as a reader was constantly trying to analyze, to figure out what his story was. I kept asking myself, ‘He has to turn back into a prince, doesn’t he?’ The more we find out as Nyx goes through the castle, the more I started to wonder. I never knew quite where it was going. It was interesting how beast and prince came together in this and why. I hadn’t seen that in any other tale.

I should mention that despite how their introduction looks a little humorous, I think some may find the main characters too dark and self-centered to enjoy their story. I didn’t mind it because they interested me, and I did come to like them. But at times it was edging on a little much for me. There is some terrible violence and pain in this and the characters didn’t always respond the way I wanted them to, though I usually understood why they did.

On another note, I enjoyed the descriptions. I loved this scene, an entrance of Ignifex, how it beauty transforms into horror with a change of focus that just zooms in on him:

Dinner was in a great hall carved of deep blue stone. A colonnade ran down either side; on the left, the rock wall behind the pillars was rough and unfinished, but on the right was a vast wall of stained glass. There were no pictures in the glass, only an intricate swirl of many-colored diamond panes that cast a rainbow of glimmers over the white tablecloth. At the far end of the hall , a great empty arch looked out on the western sky, where the sun hung low. Though the horizon was far away, the sky looked strangely close: its mottling was larger and its surface more translucent, glowing bright red-gold veined with russet.

Amid the glory of that sky was a dark speck. It grew swiftly, until I saw that it was a great black bird, easily as big as a horse. It slowed as it approached the arch, its body melting and changing into a man.

No, not a man: the Gentle Lord. He landed with a whoosh and strode forward, boots clicking on the stone floor as his wings furled and melted into the lines of his long dark coat. For a heartbeat he looked human, and I found him beautiful. Then he came close enough that I could make out the cat-slit pupils in his crimson eyes, and my skin crawled with horror at this monstrous thing.

So, what did I have trouble with? Towards the end it got confusing. I’m still not entirely sure what happened. It seemed like a crazy quilt at one point. Then it ended up in a place that seemed a little clichéd. I was surprised of that after the rest was so original. Though I liked what I thought was the main point to the story. It’s relevant to anyone, and the lessons learned were apt.

Also, there were some plots points that didn’t seem to be resolved. It may be because I was confused, but things seemed to be dropped here and there along the way, things I’d loved to have seen more about. That too may have been because you threw in so many elements that had to be meshed together to make a whole. I don’t believe everything has to be tidied up at the end of a novel, but rather than seeming like some stray hairs escaped a tie, at times it felt like the hair burst into a frizzy mess that nothing constrained.

And a point I didn’t have problems with but others might: there were a lot of mythological allusions in the story that were not explained, from many backgrounds. Almost every fantastical element has some place in some mythology, so they might not all make sense to those going in with no knowledge of them. But those who do may enjoy catching the references. I know I missed some but I enjoyed the ones I caught because it gave the story added layers.

This review really was tl;dr. Okay, Pros: interesting characters sometimes behaving badly including in sexy ways (though not very graphic). Nice writing. Nice interweaving of several folktales and mythologies, though it helps if you’re familiar with them in the first place. Mostly very original. Cons: could be quite dark, confusing in parts, ending kind of clichéd while the rest wasn’t. Some readers may not like the main characters, and may have trouble with all the mythologies. That makes this a bit hard to grade for others. If it hits the wrong notes as described I can see it as being DNF for some people. For me though. it’s a B.