REVIEW: Crash Into You by Katie McGarry 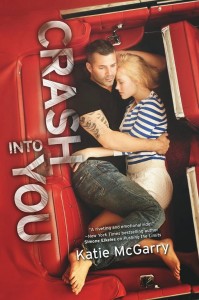 I was first introduced to your work by Jane, who sang the praises of Pushing the Limits. I read it many months later, curious about this upper YA/new adult thing that was just beginning to take flight. Although dubious, I enjoyed it and read Dare You To eagerly when it came out. Beth’s story firmly placed you into my favorite authors category so like many of your other fans, I anticipated Isaiah’s book.

We first met Isaiah in Pushing the Limits. We also met Beth, the girl in his life. At the time, I loved Isaiah and Beth and assumed they were going to feature as a couple in a future book. Except that didn’t happen, and Beth fell in love with someone else.

Crash into You opens with Isaiah desperate to make some money. This sends him back into the world of street racing, where it puts him into the notice of people he’d rather avoid. But this choice also allows him to meet Rachel.

Rachel comes from a rich family that doesn’t understand her and has suffocated her. As I’ve said in the past, I tend to have no patience for poor rich girl stories but I felt immediate sympathy for her. It’s hard not to. She was essentially born to be a replacement for the dead sister she never met and told this every single day of her life. That’s just great of her family, don’t you think?

But Rachel loves cars and she loves driving her white Mustang fast. A chance meeting sends her into the world of street racing, but bad luck puts her into the sights of the guy who controls that world. However, it also puts Isaiah into her debt and he wants nothing more than to return the favor.

While I loved that Beth found her hero in Dare You To, part of me was devastated by what that meant for Isaiah. Despite what she may have thought, he loved her. Sometimes, though, that’s not enough. It wasn’t until this book that I fully understood how terrible Beth and Isaiah were for each other. They enabled each other in the worst ways. Some people may say they didn’t challenge each other. I would say they didn’t encourage each other to be the best they could be.

Because of her family dynamic, Rachel grew up coddled and protected. For some people, this results in a complete inability to handle the world. For Rachel, however, this gave her a complex. If you told you’re weak and that you need help all the time, you inevitably believe it. Especially if it comes from your family. I found it immensely unfair of the men in her family to put the burden of her mother’s happiness on her. That’s terrible. I’m not diminishing her sister’s death. Losing a family member is awful, and losing them to cancer is one of the worst ways possible. Believe me, I know. But my respect for Rachel’s father and brothers was sorely tested.

I don’t have an anxiety disorder so I can’t comment on whether the portrayal was accurate. Nothing about Rachel’s behavior pinged me as Othered or glossed over. I definitely feel that Rachel’s need to hide it from her family was all too true, especially given their past reactions to it. It’s not the end of the world if your child has an anxiety disorder, and it’s certainly not a terminal disease like cancer. It just needs to be managed. Again, her family’s treatment of it made me less sympathetic towards their shenanigans. But as I’m not confident about my knowledge of social anxiety, I’d appreciate it if anyone with better familiarity could comment on this particular depiction.

Rachel’s relationship with Isaiah epitomizes what I believe a good, healthy romance to be. Falling in love makes you want to be the best version of yourself. Being with Isaiah encouraged Rachel to be braver, to be the person she always wanted to be but felt she couldn’t be because her family insisted otherwise.

As for Isaiah, he needed someone like Rachel to shake up his world. He definitely has a rescuer complex. I didn’t notice it as much with Beth because in Pushing the Limits, she was such a trainwreck in need of rescuing all the time. With Rachel, however, who wants to be independent and able to do things on her own, it becomes startling clear. Isaiah believes he can take care of everything and be the protector. Sometimes, though, being strong means being able to let go and allow the person you love to make that mistake. Because stumbling and falling will allow them to get stronger. Rachel was the one who made him realize this, and I think that was key in making their romance believable to me.

On the other hand, I was a little uncertain about how believable Rachel’s social anxiety made her a laughingstock among everyone in town. Don’t get me wrong. I absolutely think it would have set her apart as “that weird girl.” It’s been a while but I remember high school. But the way everyone would laugh when she’d speak publicly didn’t ring true. Awkward, uncomfortable silence, yes. Hushed whispers about “the weird girl failing” again, yes, Laughter? Maybe it’s because we never really saw the inside of Rachel’s private school and the social dynamics at play. Are readers just supposed to assume that it’s mean girlish because it’s a private school for rich kids?

I also wish we could have seen Rachel racing cars more. I understand that probably would have messed with her character arc but it would have been nice to see the racing lessons Isaiah gave her on the side. And of course, Rachel messing around with cars more would have been great. I loved that Rachel knew the in and outs of cars, and that she wanted to open a specialty garage with Isaiah. Seeing that kind of love hands on, particularly from a female character doing a “non-traditionally female” hobby, is always a plus in my book.

Oh, and I loved Abby. I loved how she attaches herself to Rachel as her best friend and doesn’t let go. I hope there’s a book about her in the future.

After worrying about poor Isaiah in previous books, Crash into You left me satisfied that he found his match. I love the series you’ve set up here, weaving through this network of friends introduced by Noah and Echo. And even though the next book is about West, who I haven’t quite forgiven for his blatant disregard of his little sister, I’m looking forward to it too. B