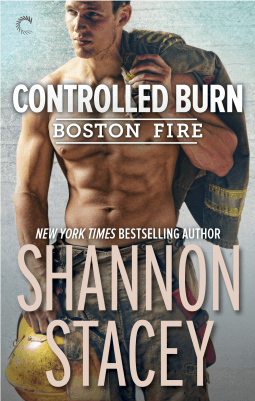 Rick Gullotti lives the good life. He fights fires, dates beautiful women—though none long enough so they cast wistful glances at jewelry stores—and has great friends. And thanks to helping out the elderly couple who own his building, his rent is low. But when concerns about their health lead him to contact their only son, his life starts getting away from him.

Jessica Broussard has no interest in leaving sunny San Diego or her cushy corner office for Boston, but her father—who happens to be her boss—dispatches her to deal with the grandparents she’s never met. She’s unprepared for the frigid winter, loving relatives who aren’t the monsters she’s been led to believe, and the hot, scruffy firefighter who lives upstairs.

At first, Jessica is determined to get back to her comfortable life as quickly as possible. All she has to do is talk her grandparents into selling their monstrosity of a house and moving to a retirement community. But she underestimates Rick’s dedication—and his considerable charm. Nobody’s taking advantage of his friends on his watch, even if that makes the tempting southern California girl with the long legs his adversary. Unfortunately for them both, the only thing more urgent than the matter at hand is their sizzling chemistry, and it’s quickly becoming too strong to resist.

Lots of us at DA have reviewed your books but I’m the lag behind. However, something about this blurb caught my eye. I think it was the nice sounding hero who enjoys helping his elderly landlords out and is uber protective of them. Yeah, Rick sounds like a great guy.

The background info is great including “Guy joking” in fire station, the terror of driving in Boston and shrugging off weather that would make this Southern woman an icicle. The opening scene is probably all kinds of HIPPA violations but what’s possibly getting fired between friends?

Okay, first meeting between Rick and Jessica is … not bad. Certainly not the usual immediate conflict I’m used to reading in romance. Each uses cautious words, doesn’t rush to judgement – though each has some thoughts about the other. Adult reactions instead of knee-jerk. It’s refreshing that when they do cut through the BS and lay their caution cards about Joe and Marie on the table, they do it quietly, confidently and without fireworks.

There is some obligatory catching up with happy couples from past books who have already “put a ring on it.” The convo between Rick and his fire fighter buddy in the bar is a little relationship heavy. Not near emo territory but still … odd but since they don’t actually parse and dissect what “not the marrying kind” means, I’ll let it roll. Rick and Jessica think and wonder about each other but it’s more how the other might think about something or opinions about something rather than just mental lusting. They talk! Really talk and about serious sh!t and get things in the open rather than letting them fester. And try to understand each other and where the other is coming from. Wow.

The sins of the father(s) …In a subplot, Jessica is learning that her father’s view on his parents was formed during childhood and when she – refreshingly – talks with her grandparents, there are legitimate reasons for it rather than the initial – slightly outlandish – impressions Jessica has been left with. Jessica also has to acknowledge her father’s limitations with her and how she has just let their relationship slip into least resistance against his demands and controlling and whether she wants to change.

Their (repeated) decisions not to kiss lead to a telling quote at a pool game.

she liked the feel of his body so close to hers. But when she laid the pool cue across the felt and straightened up, he put his hand on her elbow and turned her to face him.

“I agree.” She stepped into the curve of his arm. “So after you kiss me, we should make another agreement about how we won’t do it again.”

But of course we all know, along with them, that they are going to do it again. Rick and Jessica actually get to know each other, like important stuff, before moving on to the physical. And then that part progresses naturally and along with emotional and social one. Jessica’s reaction to the hockey game is priceless. Their bantering during the game is funny too. Win!

The short separation makes both put some thought into the relationship as well. How can this work, does distance change things and where to go from here. I was waiting for the inevitable relationship issues and questions to arise. Jessica gets some good advice from past heroines about the reality of a relationship with a firefighter and not just “oh, firefighters are so sexy! sexy! sexy!” Then comes the hoopla about her grandparents’ house which, I felt, arrived a bit too close to the end.

The book wraps up with Rick and Jessica knowing they want more, maybe the whole enchilada and being willing to sacrifice and work for it. It felt a teensy bit rushed right at the end and there are a few plot threads left unfinished – perhaps to be completed in the next book in the series? – but overall I’m very impressed with a story of a mature – and that encompasses age as well as experience and the way the relationship unfolds – thoughtful story. After reading this and Kati’s review of “Heat Exchange,” I need to read more of you. B