REVIEW: Confessions of a Prairie Bitch by Alison Arngrim 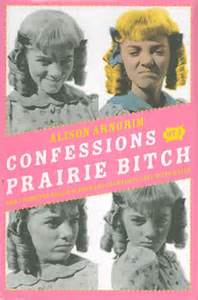 I’ll start the confessions by admitting that I was never a major fan of “Little House on the Prairie.” Even at age 10 I knew sappy when I saw it and not ever having read any of the “Little House” books, I wasn’t invested in the series. That being said, I did watch my fair share of episodes since in that day and age, there weren’t the 500+ channel options of today. Without the snappy book title and loads of recommendations when Jane featured this in a Daily Deals, I would probably never have heard of or chosen to read this book but having finished it, I’m glad I did.

Arngrim starts at the beginning, laying out her parents’ lives and how they got into show business then proceeds to tell about her actor brother and then herself. She’s honest, painfully so at times, funny and a great raconteur. There are hilarious details of how she wowed ’em with her snooty script reading during her audition for the part of Nellie, the inside scoop on the custom made curls she wore for the length of her time in “Walnut Grove,” her memories of the folks behind the scenes who really ran the production – learn what liquid lubed the actors and how seriously the stock was managed – and discover her take on her fellow actors. For the size cast they had, it is amazing how well they all got along and how they still consider themselves family almost 40 years later.

But don’t think that stories of Half Pint, Pa and the others are all that’s here. Alison bares her soul and her painful family past all without sounding strident or bitter though God knows she has a right to be. Readers who have drug, alcohol, rape or incest triggers are warned that parts of Alison’s story will hit home hard. Life might have been sweetness and light before the camera but the years leading up to her time on the series were awful for her.

The lessons learned on the set to speak up, look people in the eye and get outside her shy shell served her well during her school years of dodging LA gang members on the bus and sticking up for herself at home. The hijinks she got up to with cast member and good friend Melissa Gilbert are a riot to read about as they managed to make it through their teen years together.

By the age of 20 the series was behind her and I wondered what she’d done since then. Not much acting but what contributions she’s made to the lives of others. “Little House” ended just as the AIDS scourge was beginning to be seen in the US and Alison’s on-air “husband” Steve Tracey’s battle with the disease cued her next stage in life. For the next few years, she tirelessly dedicated herself to volunteering for the cause and using her Nellie notoriety to focus attention on the needs of the dying.

What happened then? Alison used Nellie one more time to turn the spotlight onto the dark of her past and work to overturn a law that, as explained in the book, is enough to make you weep. Alison had already had years of therapy by this time but by going public – on the “f*cking Larry King show!” as her father gleefully put it – she and others took on the California legislature and won a victory for the abused.

I finished the book in awe of Alison’s courage in speaking up for causes she believes in and for her willingness to open herself and her experiences to public scrutiny in order to help others as well as herself. I also appreciated her wit and humor and her ability to tell amusing anecdotes that put you there on the set of her show – all without talking herself up or others down. But she’s still honest and funny at the same time. Good memoires are an illuminating read – not just about past events but also about the teller as well and Alison’s book is well worth seeking out and spending time with.