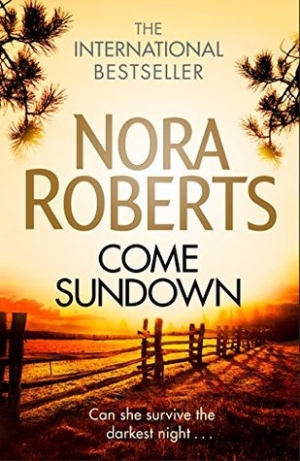 Note to readers: All the trigger warnings

Your annual stand-alone romantic suspense novels are auto-buys for me. Come Sundown is your latest release. It is definitely a suspense story and there are two romantic threads as well as a sniff of another one but I found the romance to be fairly understated.

Bodine* Longbow is the manager of the Bodine Resort in Montana. Her family own and run a large ranch adjacent to the resort and everyone works in one or other of the businesses. Sam Longbow, the patriarch, and the eldest son, Chase, work the ranch, Maureen (the matriarch) works in the resort along with Bodine and the youngest Longbow, Rory (who does marketing and publicity). When the present day story begins, Callen Skinner, Chase’s best friend and an-almost Longbow by love, returns to Montana from working in Hollywood, training and wrangling horses for the movies. Cal was 18 when he left and Bodine was 15 so there wasn’t a romantic connection at that time – although when Bodine was about 13 she did have a powerful crush.

(*I thought the name was a bit silly at first. But Bodine is Maureen’s maiden (sur)name and late in the book there is a touching story about how she came to bestow it on her daughter.)

When Cal returns to Montana, he does so to work at the ranch but also ends up working at the resort because reasons. He notices immediately that Bodine has all grown up and he very much likes who she’s grown into. Cal is a cowboy and he has that lazy cadence to his speech which some might mistake for a lack of wit. He’s a sharp man but he’s fairly understated with it. Bodine is a go-getter, detail oriented and passionate about the resort. I did see chemistry between Cal and Bo but, somewhat like Cal himself, that too was somewhat understated. Perhaps if more page time had been spent with them, I’d have felt more strongly about them as a couple. As it was, I was very happy for them to be together but I didn’t feel any great passion about it either.

Chase Longbow and another resort employee also have a romance in the book but it takes up less page time than Cal’s and Bo’s. I still found it sweet.

Cal also has a magic horse called Sundown. I don’t think the title of the book has anything to do with the horse though.  At least, I hope not. :D  Sundown knows many tricks and has a distinct personality. I expect horsey people will particularly enjoy Sundown. I never went through a horse phase myself but I appreciated him.

But the heart of the book is Alice Bodine.

The first chapter is takes place in 1991 when Alice, aged 21 is returning from her own journey to Hollywood. She’s  coming home, having run off when she was 18. She sent the occasional postcard but there had been teenage drama and some flouncing so she hasn’t been good about keeping in touch. But now she wants to come home. She hasn’t called to let the family know she’s coming – but she’s pretty sure they will welcome her for Thanksgiving Dinner. If she can get a ride.

Unfortunately for Alice, she accepts a ride from the wrong man. He doesn’t take her home. He knocks her out and she wakes up shackled by leg irons and in a cold, dark cellar. She’s there for a very long time. Years. During which, the man, who tells her to call him “Sir”, beats and rapes her regularly. It’s brutal reading. I don’t want to get too much into what happens to Alice because I think it is best experienced within the book. And I don’t want to give away too much. I’ll just say that her life is very hard and awful and I marveled at her ability to survive. I had feared a very dire end for Alice but I was surprised – in a good way. For those who can persevere through the brutality of Alice’s lot with Sir, there is some relief. But along the way, it is very hard and the simplicity of the writing seems only to have made the horror more stark.

In the present day, a young woman who works at the resort is murdered and then another local woman is also killed. There is a serial killer on the loose and the community is grief-stricken and scared. A deputy with longstanding grudge against Cal makes trouble but Cal is never a serious suspect (and neither should he be).

I was struck by the long delay between the second murder and the threat to one of the people the Longbow family hold dear. In between there was a lot about Alice, as well as the developing romances between the Longbow siblings and their various partners but there was nothing much from the killer. It felt odd that there was such a large time gap and it wasn’t well-explained by the text.

One of the things I  love about your books is your ability to make me care about a character in a relatively short word count. You do it all the time for me in your JD Robb books. The victims and their families in the In Death series hook me just about every time. Here, I was all in for Alice from the first chapter. I held my breath for her and my heart broke for her and I raged and feared for her too.

I wondered a little bit if in some ways Alice’s story might be somehow exploitative/appropriative – I can see an argument that her story is easily played for feels. But I ended up thinking mostly not. After giving it some thought, more to check myself than the book, my take is that you showed a deft touch and included enough about her for her to be a full character, with flaws, strengths, hopes, fears and everything in between. For me at least, Alice wasn’t in the story for some hurt/comfort reader thrills. That said, there is definitely some hurt/comfort in Come Sundown. There’s no way around it – it’s implicit in the nature of the story. I don’t think you wallowed there though and that made a difference to me. You showed me enough that I knew what was going on but you didn’t dwell. It was also a clever choice because I found myself thinking an awful lot about how Alice’s life must have been when I wasn’t reading the book. She stuck with me all through the novel and ever since. But I suspect some readers will think that Alice’s character was exploited. I was okay with how it panned out but I don’t pretend to be an expert here. I’m certainly interested in the conversation.

As a romance, Come Sundown is a little thin. Maybe a C+/B- in terms of readerly romantic satisfaction. As a thriller/general fiction book however, it rates at least a B+.  So, I’m going with a B for the overall grade. It’s hard to read parts of this book but Alice made it totally worth it. Recommended.