REVIEW: Christmas at the Castle by Marion Lennox

I fell behind reading your releases in 2013, but when I saw you had a Christmas novel out in December I jumped on it. From the first couple of chapters I could tell that this was going to be a vintage Lennox, combining a fairy-tale holiday setting and story with a likable, no-nonsense heroine and a sympathetic, aristocrat hero. 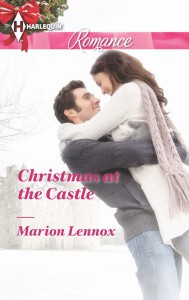 Angus Stuart, Earl of Craigenstone and Lord of Castle Craigie, has a problem. The unwilling inheritor of his horrible father’s Earldom, he wants only to sell up the Castle and its land and get back to New York, where he has lived almost all his life. But his young half-siblings want one last Christmas at the Castle, and with the way their father mistreated them and their mother, he’s having a hard time saying no.

Scottish-Australian chef Holly McIntosh also has a problem. Her worthless fiancé stole money from their restaurant and ran off, leaving Holly with a mountain of debts and maxed out credit cards. She returns to Scotland and her beloved grandmother for a break and a frugal Christmas.

Angus needs a chef and housekeeper, and Holly needs money and a job. They strike a bargain, but that bargain almost immediately becomes more complicated when Angus tries to reassure his father’s widow, Delia, that the children will be fine at the Castle because Holly will look after them, he goes too far and blurts out that Holly is his fiancée. Holly agrees to the deception but on strictly business terms, and our tale is off and running.

Angus is not your average Earl; he hates being the Earl, he hates having to take responsibility for a Castle, family, and tenants he doesn’t know, and he just wants to get things settled and return to his investment banker American life. But he’s a very decent person, and while he’s just the Lord and not the Laird, as Holly’s grandmother Maggie observes, he’s not actively malevolent like the previous Earl.

Holly is forthright and unimpressed by Earls. She takes pride in her accomplishments as a chef even as she berates herself for having falling for her worthless ex-fiance’s deceptions. But although she agrees to the engagement pretense for the children’s and her grandmother’s sakes, she won’t turn herself into what the Earl thinks an Earl’s betrothed should be. Their trip to an exclusive boutique in Edinburgh (Maggie’s suitcases are, of course, lost by the airline) is a great sendup of the scene in Pretty Woman: the boutique’s salespeople are more than happy to kit her out, but she doesn’t want their twinsets and pearls:

‘You haven’t exactly chosen a suitable fiancée,’ she reminded him.

‘I haven’t exactly chosen…’ But then he looked at the manager’s dour face and he decided enough was enough. He wasn’t about to discuss temporary engagements in public.

‘My mother will probably be coming over…for the wedding,’ he told the man consolingly. ‘She’s American but this style of clothing is exactly what she’d love. That’s why I brought Holly here. If I can leave my car here now, I’ll bring my mother—and her friends—in for a pre-wedding shop as soon as they get here.’

‘Certainly, My Lord,’ the man said heavily, casting a look of dislike at His Lord’s intended. ‘So your mother has taste?’

‘Yes, she does,’ Angus said and Holly smiled her sympathy at the poor man.

‘That’s put me in my place properly,’ she said and she reached out and took the manager’s hand and shook it with such warmth that the man’s disapproval gave way to something that could almost be a smile.

Their next stop is a more appropriate store, where Holly finds:

black leggings, blue leather boots that reached above her knees, a gorgeous oversized scarlet turtleneck sweater and a cute scarlet beret that should have screamed at her copper curls but didn’t.

Of course Holly wins over Delia (and vice versa) and of course the children love her, and of course Maggie and her helpers from the village are able to turn a dark, miserable Castle into an inviting, Christmasy home. And of course Angus looks incredibly hot in his kilt. It’s a Christmas fairy tale, so you know how these things work. But the relationships feel real, and Holly and Angus don’t just fall into lust with each other, they talk and share confidences and become friends.

Not everything works perfectly; sometimes the Christmas spirit is a little thick. There is a dog, who belongs to the forcibly retired gamekeeper. They get their happy ending too. Everyone gets their happy ending, except the villain, whose villainy is played for understatement and who doesn’t get punished as badly as he deserves.

The way Angus resolves his obligations to the village and the earldom requires the greatest suspension of disbelief, and it will undoubtedly cross over into sugar-overload-territory for some readers. But this is Marion Lennox’s story, and she manages to balance the sweetness with a few down-to-earth characters. And I’m a sucker for a Christmas story, so it worked for me. Go into expecting to read about a Christmas miracle and it may well work for you too. Grade: B