This is the sequel to Song of Scarabaeus and I definitely think that readers should read Song first. Children starts where the cliffhanger ending of Song stopped: our bio tech heroine, Edie Sha'nim, in desperate need of neuroxin, a toxic drug that her half Talasese heritage needs to stay alive. If Edie dies, so does her companion, Finn, who is attached to her via an invisible biological leach implanted by some enemies in book 1. 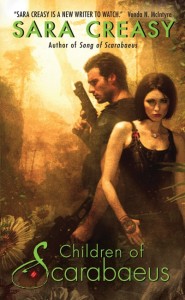 Cat, a pilot, and Finn have hired a bounty hunter to obtain the drug and when he returns it is with a lifetime supply which sets off warning bells in Edie’s mind. There should not be such a supply of neuroxin outside of Talas, her home planet. But these concerns are shoved aside when the CRIB, the intergalactic power, descends on Cat, Finn and Edie.   Edie is even more necessary than ever when it is discovered that the galaxy is suffering a spreading famine.   CRIB military forces and the science forces are fighting over who is going to gain control over Edie and using Finn’s weakness toward Edie against her.

The moral message that humans shouldn’t interfere with the ecology   continues in a strong way in Children.   The extent of which this message is taken is one of the flaws of this book because I would have liked to have seen a more even handed treatment of the issue. A more even handed treatment would have provided more moral agnst for Edie, at least.

Like Song, Children is a book of adventure as Finn and Edie search for a way out of their leashed predicament and find peace. This book is more focused on idea of home, a microcosm, if you will. I’m not a big science fiction / fantasy reader and so maybe all those books juxtapose the “save the world adventure for the love of one” concept but I loved the idea of the underlying longing for Finn, Edie, and the others was the pursuit of a house by a stream with a dog and a field to tend. Finn relates the story of having a dog; another child grasps onto a handmade game; Edie is struck emotionally when she thinks of what it would feel like to call someone mother. These were not extravagant, grandiose visions, but simple dreams, the basis upon which universes are built.

Finn and Edie’s motivations have never been about saving the world, although Edie’s feelings evolves over time. Finn, for example, joined freedom fighters because of a woman. At a very young age, Finn got caught up in the rhetoric of those who were to fight against the Crib. Edie really just wanted to belong to something and someone.

I found Children to be much more romantic than Song. Finn’s emotions were more accessible and more of the conflict was about their impediments to truly being together, one of which was the leash between them. Edie’s high emotions would provide painful biofeedback to Finn thus even arousal became a barrier to true togetherness.

I did think that Children was more predictable than Song. I guessed right a number of times as to what would happen next or what the secrets were in this one whereas Song was much more a mystery. I’m not sure if I had caught on to the rhythm of the writing by that time or the outcomes were simply more pat.

The ending was satisfyingly romantic for this romance reader and it’s a series I feel confident in recommending to die hard HEA fans. I understand that there are no future books planned in this series so I appreciate that you tied up a number of loose ends while still leaving it open for Finn and Edie to have further adventures. I don’t know what you will be writing in the future, but I am definitely not ready to leave Finn and Edie behind. B