REVIEW: Caught in the Act by Jill Sorenson

Jane sent me Caught in the Act months ago to peruse and I ignored it. This proved to be an error on my part. In my defense, I’d just read a couple of awful romantic suspense novels and couldn’t generate any interest in another. Then a friend of mine on Twittter praised your work and I decided to give Caught in the Act a try.  I’m glad I did—it’s an exciting, well-crafted story with sexually combustible leads. Even better, it’s set in a venue and class rarely explored in romance: working class San Diego.

The novel opens steeped in tension and, for the next 370 pages, never lets up.

Kari Strauss is waiting in line at the San Ysidro border crossing, heading back to her home in the States.

There were twenty-four lanes on the Tijuana side, a massive snarl of traffic that found order in the last hundred yards. Before the inspection booths were visible, the dividing lines were ignored. The more aggressive drivers made their own lanes, squeezing into narrow spaces and zigzagging across the chaos. Everyone else lurched forward in semiregular intervals while street vendors navigated the shifting aisles, selling everything from chicle and cold drinks to silver jewelry and colorful hammocks. Some of the peddlers were children whose shoulders barely cleared the hoods of the cars.

Kari is terrified. She’s traveled between Tijuana and San Diego once a week for several years, buying art for her gallery, Zocalo. She’s never transported anything illegal until today. Today, in the back of her van, taped into a cardboard box, is a young Mexican woman named Maria Santos. Over the past year, Kari has become friends with Maria. Last week, Maria, desperate for money to support her family, asked Kari if she would help her make across the border. She made it clear, were Kari to say no, Maria would try to cross on her own. Kari, who knows how deadly crossing the border illegally can be for a lovely young woman, agrees against her better judgment to help. 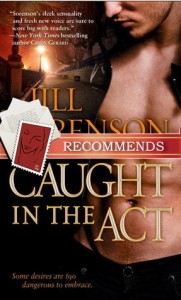 As Kari approaches the border, sweaty and panicky, she realizes the guy stationed in her lane is a hottie. His name tag reads Officer A. Cortez—and he looks like a guy who takes his job very seriously. Rather than wave her through, he asks her to get out of the car while he inspects her van more carefully. Kari, petrified he’ll discover Maria, pours on the charm, hoping her unbuttoned shirt, cleavage, and flirtatious manner will distract him. Officer Cortez, however, is determinedly immune to her efforts. Just as he is about to explore the boxes in Kari’s van, there is a commotion in a nearby lane. He decides his help is needed elsewhere and sends Kari and her illegal stowaway on their panicked way.

The officer, Adam Cortez, was very aware Karina Strauss was trying to distract him with her low-cut blouse and fabulous form. He knows she was acting oddly and he shouldn’t have let her drive away. And he knows he shouldn’t be running a profile check on her after work. But, the minute he saw her face and her name, he realized she must be the sister of Sasha Strauss, the long-time girlfriend of Carlos Moreno, a Mexican-born drug lord. Adam has a thing about Moreno; two years ago the love of Adam’s life was killed in a shootout by Moreno’s men. Adam has pined for retribution ever since. He decides to check up on Kari, wondering whether she might be involved on Moreno’s payroll.

Kari rarely sees her sister, Sasha. Sasha, a serious drug user, is kept on a short leash by Moreno. Sasha’s situation breaks Kari’s heart—both their parents are dead and Kari, as the eldest, feels responsible for Sasha. So, when Moreno sends one of the top members of his gang, Jesús “Chuy” Pena, to deliver a message to Kari, she listens. Chuy tells Kari her sister’s drug habit has become a problem for Moreno and unless Kari pays Moreno the money her sister has pilfered from him—205K—Sasha will be harmed. When Kari protests there’s no way she could get that kind of cash, Chuy suggests she pay Moreno in a different way… by running a shipment of drugs across the border. If Kari doesn’t help, not only will Sasha be in danger, but Chuy will drop a word to the Border Patrol about Maria. Kari, trapped, feels she has no choice but to agree to do the drop. Chuy also tells Maria she’s now working for him and to show up at the Hotel del Oro, the seedy hotel Chuy runs, in the morning where she will work as a maid.

As Chuy and his partner, Armando Villarreal, leave Kari’s house, Adam, sees them. The men are laughing and their easy manner makes Adam sure Kari is in cahoots with Moreno. Adam begins to shadow Kari—without getting permission for an official investigation—and the more he checks her out, the more he wants to check her out. He’s attracted to her big time and, even though he’s convinced she’s working for the guy he hates most in life, he can’t keep his hands off her. Kari, equally interested in and conflicted about jumping Adam’s bones, doesn’t believe she can tell Adam the truth about what she’s up to—she’s sure Moreno would find out and kill Sasha. Adam and Kari get involved, each keeping secrets from the other, and worried the other will put them in danger—Adam from his supervisors for sleeping with a suspect, Kari from Moreno for sleeping with a cop.

Kari and Adam aren’t the only ones with a complicated relationship. Maria, while at the Hotel Oro, sees a man she knows as Forester, to whom she feels she owes her life. Years ago, Maria tried to cross the border and was savagely attacked. Ian Forester, a border guard at the time, found her, took her to a hospital, and made sure she survived. Maria is shocked to see Ian buying drugs from Chuy—she was sure Ian was one of the good guys. Ian is horrified to see Maria—he recognizes her immediately—because he’s working undercover for the DEA.

The story line of Caught in the Act is a complicated one. Adam, Kari, Maria, and Ian are all trying to take down Moreno. Moreno, however, isn’t just another drug lord. He’s wily, smart and, improbably, morally conflicted about his relationship with Sasha. Chuy threatens the safety of everyone while, Armando, Chuy’s right hand man, has other, hidden, admirable loyaties. I can’t think of any book I’ve ever read that portrays Mexican gang members with such nuance and sympathy. I didn’t have any trouble, however, following the action. The scenes flow into each other naturally and there are no forced coincidences or too stupid to stand actions on the part of any of the protagonists. I found the suspense story to be damn near addictive—I stayed up way past my bedtime in order to finish the book!

The love stories—and there are two—are complex as well. It’s fun watching Kari and Adam—in between bouts of steamy, well-written sex—try and figure out how to justify trusting the other. They both sense that the other isn’t really the enemy but the stakes are so high, neither is at ease with trusting their basic instincts about the other. I wasn’t sure how Kari would get out of her predicament or how Adam would manage to keep his job. Maria and Ian are lovely together. They have no choice but to trust the other—Chuy will kill anyone whose loyalty he doubts—but they shy away from caring for each other. Ian is, after all, an officer of the law and Maria, an undocumented worker. Their future looks bleak from the onset of their renewed connection and is not resolved by the end of the novel. I’m hoping Caught in the Act is the first of a series because I’d really like to know how that story turns out!

Caught in the Act is a well-conceived and presented romantic suspense novel. The leads are hot and the suspense thrilling. There’s just the right balance of romance and suspense and the two complement each other well. The novel also gets extra brownie points for its unusual setting—the Mexican/American culture in So Cal comes across as authentic and complex.

The book isn’t perfect. Kari and Adam act impulsively though neither of them comes across as a risk taker. Neither Sasha nor Moreno quite add up—and the latter is almost schizophrenic in his behavioral swings. The ending is disappointingly and surprisingly traditional—at least for Adam and Kari—and felt hurried. Several plot threads are left hanging—if this isn’t a series, I will have been annoyed to have been invested in characters whose fate I never learn.