I was checking the Samhain home page for new releases and stumbled upon your book. I was looking for something short, steamy and fun and this seemed to fit the bill. I’m happy to say that it was extremely enjoyable, and a fun, flirty read. 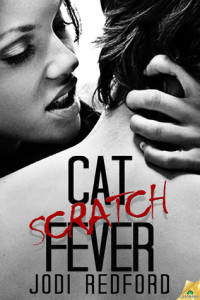 Cat Scratch Fever has a familiar paranormal set up. The heroine, Lilly, is a lynchat (werelynx) and is going into heat. This is inconvenient for her because she’s trying to broker a business deal for land with the hero, Dante, who is a werewolf. The werewolves and werelynxes hate each other because werewolves stole the werelynx land years ago and won’t sell it back to them.

The set up promises sexy fun and delivers. In one of the very first scenes, Lilly’s overcome with lust from the heat so she pulls her car over and masturbates to relieve the sensation. Naturally the hero stumbles upon her and cannot help but watch. Writing up the description, it sounds a bit heavy-handed but I thought it was well done.

Lilly is a decent heroine. She wants the land back and will do anything to get it. She’s a bit headstrong and mouthy, but not in a way that makes me roll my eyes. She refuses to take crap from anyone, especially the werewolves. Dante is the alpha of the werewolf pack and he’s not an overbearing alpha. If anything, I didn’t find him quite alpha enough. One of the main angles of the storyline are his avoiding conflict with his father over one pack issue, and another female over another pack issue. I felt he could have dealt with these two people in a more authoritative way if he was the alpha, but it wasn’t enough to mar my enjoyment.

What I liked most about this book is that it was funny. Some of Lilly’s impatient lines to Dante were clever.

Fascinated, she watched those strong, tanned fingers grasp the zipper and tug it down. One notch at a time.

“Why are you moving so damn slow?”

“No, but I could have gone to a movie and filed my taxes in the amount of time it’s taking you to unzip.”

While I really enjoyed this, I’m going to have to take some points off for the ending. It’s a HEA but it’s extremely abrupt. A little aftermath goes a long way, and this wasn’t enough to ruin the read for me, but it felt as if there was a chapter missing. I’m sad there aren’t more books in this series immediately purchaseable. I give this a B.