You are easily one of my favorite authors.   These days it’s very rare for me to follow a series past a certain point, but I find myself doing that for the novels you write under both the Michelle Sagara and Michelle West names.   It also helps that thus far, they haven’t disappointed me which goes a long way to keeping this reader’s loyalty. 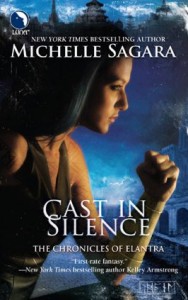 Cast in Silence is the fifth book in your Elantra series published by Luna.   The Cast books follow Kaylin Neya, a private in the Hawks, the police force that helps protect the city of Elantra.   Kaylin is stubborn, hot-headed, and at times immature, traits which prove unsurprising given her background.   Still, she’s a useful member of the force despite her flaws.

Unfortunately for Kaylin, she’s also gifted with an unusual magical talent of alarming proportions, the signs of which are evident in the black marks that cover her skin and have, in fact, continued to spread across her body.   The only thing she finds useful from this talent is her ability to heal, which she exercises often at the expense of her health.   Other people, however, don’t see it that way.   An Outcaste Barrani lord who rules over the fief Kaylin spent her childhood in has marked her.   The dragons who rule Elantra have seen fit to give her magic lessons.   The time is coming when Kaylin will have to face the Dragon Emperor himself but thankfully for her, that day has not yet come.

While the previous novel, Cast in Fury, was a direct continuation of its predecessor, Cast in Secret, Silence brings readers back to the format of the first two novels — installments which stand alone but build upon what has happened before.   One of the things that has remained a mystery to readers is what happened during that six-month period in Kaylin’s life after she fled the fief of Nightshade when the person she’d idolized, Severn, killed two of her dearest friends to protect Kaylin, but before she joined the Hawk.   Cast in Silence finally answers that question.

I didn’t find it surprising to learn what Kaylin did during those six months.   She had to have learned certain skills somewhere and given my impression of her time with Severn, I never thought it would have been with him.   What I did find surprising, however, was how she came to join the Hawks.   It fit, and it certainly didn’t come out of left field; in fact, it made a certain sort of sense why the dynamic in the Hawk is the way it is when it comes to Kaylin.   But I’d be lying if I said I had predicted it.

This brings us back to why exactly Kaylin’s past was finally revealed.   There’s an anomaly in the heart of fiefs and Kaylin is sent to investigate, accompanied by Severn, who is now her partner, and Tiamaris, a Dragon who works with the Hawks.   The assignment brings her back to Barren, which is the fief to which she fled after she ran from Severn all those years ago.   And it’s here that we finally learn what is at the heart of the fiefs, why Elantra was built around it, and why exactly the Dragons chose to make their home here.

While Cast in Silence is a return to the standalone episode structure that characterized the earlier novels, I will say it’s probably more introspective than its predecessors.   There are many flashbacks.   I thought they were well-handled and in fact, I believe the plotline supported their use, but I know some readers dislike them a great deal and thought it appropriate to point out.   For some reason, those sections — where Kaylin switches from flashbacks to the present timeline — reminded me a great deal of the novels you write under the Michelle West name.   There’s something in the structure that recalls those other books.

There is one other thing I’m dying to talk about with other people who’ve read the book, but I’ll leave it unsaid here because it is a large spoiler.   But for those who have read the novel, did anyone else feel like a paradox was created by the events that happened to Kaylin, Severn, and Tiamaris?

And finally, I think I would be remiss if I didn’t bring up the subject of Severn and Nightshade.   I’ve said before that I am firmly on Team Severn, but that has no bearing on what I’m about to say.   Readers who are expecting major developments in Kaylin’s relationships with these two men will be disappointed.   There are some implications about Kaylin’s feelings towards Severn that, at best, can only be described as ambiguous but those who are on Team Nightshade might be annoyed at the lack of forward movement here.   It doesn’t bother me particularly but I have been a longtime fan of the Michelle West books and anyone who’s read those knows that a main character in that universe (Jewel) has had what might possibly be the one of the most drawn out ambiguous relationships with men in fictional history.   So take what I just said with a spoonful of salt.   I’m not especially surprised by the lack, but I can certainly see how readers expecting there to be could feel like they were being strung along needlessly.

Considering what we discovered in this novel and how it ended, I am definitely curious to see what will happen next.   I’m wondering if Kaylin’s time to meet with the Dragons has finally come.   That said, I’m not holding my breath regarding the issue of Severn and Nightshade.   B

This book can be purchased at Harlequin