I’m a longtime fan of both your Michelle West epic fantasy novels published by DAW as well as the Elantra series put out by Luna. Your books never fail to remind me of why I love this genre. I also can’t believe we’re already up to six books about Kaylin Neya, a young woman with a mysterious destiny who’s just trying to make a living working as the second world fantasy equivalent of a beat cop. 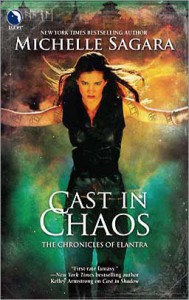 To bring new readers up to speed, the world of Elantra is one co-inhabited by six different races: humans, Leontines (lion-people), hawk-people, Tha’alani (a telepathic race with tentacles growing out of their heads), Barrani (the equivalent of faeries), and dragons who rule over them all. It’s an uneasy peace at times and the constant shifting of this balance has been explored in previous books. As a Hawk, Kaylin’s job is to uphold the law set down by the Dragon court, and the Elantra series chronicles her adventures doing just that. In addition, Kaylin is a human with unexplained magical ability of unclear origin. She can heal but she’s also capable of doing other things, the most pertinent to this book’s plot being that she can read magical sigils and glyphs, even if they are from a long-dead language.

Cast in Chaos opens with Kaylin and her partner, Severn, doing rounds on their latest assignment, Elani Street. Elani Street is, to put it tactfully, an area known for charlatans and swindlers. Fortune tellers, vendors of magical elixirs, you can find it all on Elani Steet. So imagine their surprise when a hair restoration potion actually works and gives a client a new head of hair and when a well-known fortune teller provides an accurate reading, which both upsets her client and inadvertantly endangers an ongoing investigation.

What Kaylin and Severn soon discover is that a magical disturbance has begun, centering on Elani Street and surrounding regions. Sometimes the results are benign, such as fake hair tonics delivering what they promise. Other times, babies are born with third eyes in the middle of their foreheads and the sky literally rains blood. The reason for this disruption? A magical portal between worlds is opening. What will come through it, however, is another matter entirely.

Cast in Chaos took a little while to get going for me as a reader. A good chunk of the beginning was devoted to laying the foundation for the plot and at times my attention wandered. It wasn’t boring, but I think I might have grown used to the instant gratification of simpler plots so I’m not as patient as I once was. In some respects, this lent to an impression of not much forward momentum. I discovered, however, that once I hit halfway, I couldn’t stop reading. The plot is one of those that slowly builds until it snowballs hard and fast, so I ultimately felt rewarded for sticking with it.

At last, the great question of why Elantra has so many disparate races has finally been answered! I know this has been a worldbuilding quirk that’s niggled me since the first book, and I’m sure I’m not alone in that sentiment. But the revelation in Chaos made perfect sense as well as fit into the existing magic system, explaining why certain races have access to true names while others do not. To be honest, I usually don’t care for multiple world theories in fantasy simply because I tend to think of multiple realities as a science fiction trope but I think it worked very well here.

Kaylin also has more interactions with the dragons in this book. You can just see the impending meeting with the Dragon emperor looming on the horizon. I wonder how long it will take for her to meet him because after the events in this book, it’s become readily apparent they can’t keep putting it off forever. Kaylin is just too connected to many different races and has access to magic they can’t afford to let run loose unchecked. I’m personally looking forward to this meeting because I find the dragon race very fascinating. They’re the only original race we don’t really know much about at this point, though what glimpses we received in this book were interesting.

And finally, the other aspect readers will want to know — the question of Nightshade versus Severn. People may be interested to know that there are developments. I wouldn’t go so far as to say they constitute forward movement because that would require Kaylin to take some action, but I also see that the time is coming when Kaylin will have to do something eventually because even she can no longer ignore what’s there.

In the end, I was very satisfied with this read. It features a more self-contained plot than we’ve seen in recent installments but I also think the cast of characters has expanded such that newer readers who jump straight in might get lost easily. While the cast of characters is nowhere as large as that of the major players in the West books, it is still bigger than some people might be used to. The series has also become more epic in scope and straying further away from its beginning as second world police procedural fantasies. That isn’t a criticism but readers expecting the latter might not be entirely satisfied. Still, it was worthwhile and I look forward to seeing how the events that take place at the of Chaos impact Elantra’s future. B