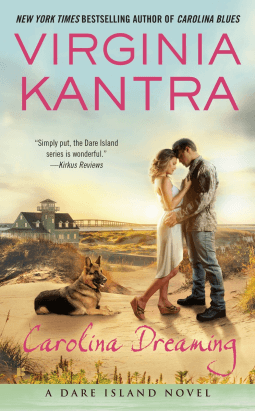 After escaping a disastrous marriage, bakery owner Jane Clark has convinced herself that she has everything she needs—her precious son, a thriving business, and a roof over her head. But the arrival of a handsome stranger on the island shows her exactly what she’s been missing…

The only home Gabe Murphy ever had was the Marine Corps. He’s working hard to rebuild his life. It will take a special place, and a special woman, to make him want to stay.

Now Gabe is determined to prove that he’s worthy of Jane’s trust—and her love. But when her past reappears, that trust will be tested, and Jane and Gabe will have to fight hard to hold onto their love and make their dreams a reality…

Every year I look forward to the next installment in the Dare Island series. I’ve come to know and like the (made up) place and the hardworking people of the stories. I also appreciate that though past characters will appear in newer books, I never feel as if all of them are being trotted out as “buy bait.”

From the opening pages, the Carolina beach setting and the welcome that Gabe hopes will be his again are laid out in comforting prose.

But here, the Carolina sun was warm against his face. The long bridge ahead arched like a gull’s wing, skimming between sea and sky.

His heart lifted. It had been eleven years since he first crossed this bridge from the marshy inlet over the flashing waters of the sound. Behind him, the highway was littered with fast food chains and beach shops, gas stations and marinas, but this view hadn’t changed.

“Home is the place where, when you have to go there, they have to take you in.”

The story is more character centered and driven with a lot of emphasis on feelings of self esteem – or the lack – and self knowledge. Both Gabe and Jane had parent issues while growing up and doubt themselves and their worth. Jane also has to worry about protecting her son who’s already been hurt by his worthless biological father. Gabe worries about being a father figure since his own was also worthless. Gabe and Jane must overcome not only their own fears but also the preconceptions of others – Gabe that he was in prison for a crime he did commit and Jane that she was a teenage mom turned single mother after she chose a piss poor relationship and stayed in it for years.

But a possible relationship with Aidan makes Gabe think about being a father. Jane makes him think about a future and finally finding a place to stay – a home. Thinking about Gabe gives Jane courage to reach out for what she wants and to believe she deserves more and better from a man.

Jane still has a ways to go with sorting out her feelings and how to deal with them. She’s not had a lot of positive reinforcement for expressing herself – see abusive soon-to-be-ex-husband – and I liked that she’s confused over how she and Gabe are starting out but able to tell her therapist friend Lauren – see “Carolina Blues” – all this and begin to work out healthy ways to have a relationship. With Lauren’s helpful comments, Jane’s ready to go for what she wants. Sex, it’s just sex she wants. Now to get Gabe on board.

It takes Gabe time to realize that Jane has carved out a life where people need her so that she’ll never be or feel abandoned again. It also gives her comfort to be needed and admired for something. But she’s worked so hard not to need anyone, herself, that it will be an effort of trust to allow herself to lean on anyone. The way Gabe needs and wants someone to need him too.

Jane will use anti-conditioning in her relationship with Gabe. Her husband might have been a shit who has made her distrust other men, but she’s changed now, she’s in a stronger place mentally and emotionally. Her father Hank’s lingering guilt over not protecting Jane from her loser first husband will color his views negatively. Yeah, and 40 years of law enforcement doesn’t help Hank perceive Gabe any better either.

Still, for all the discussions and work on getting me to see how both Gabe and Jane have progressed from their respective family issues, at times it seemed like the narrative was stuck like a scratched record. Over and over the same messages and information gets told. The efforts to make them sympathetic as well as long suffering got to the point that they almost seemed pitiable. Tossing in an abandoned mutt dog for Gabe to save was the cherry on the pathetic cake. I “got it” way before this eased up. But let me then counter that slight criticism with praise for avoiding a common romance military hero trope by not making Gabe suffer from PTSD.

I enjoyed the adult’s relationship with Aidan. There’s no plot-muppet-y aspect to the story. Aidan is a good kid but one with issues which he struggles with – an asshat father in jail and being teased for it – and reacts to as a normal 8 year old would. I think Gabe handles their relationship well and uses what he learned from his father but in a positive way – given that Gabe’s father was an asshat too.

Hank and secretary/dispatcher Marta aren’t on page together quite as much as I’d have liked but neither is their budding “older couple” relationship played for humor. Hank, underneath it all, is also a good guy and one who tried to do his best for his little girl, as best as he knew how even if it didn’t always show.

I liked that Gabe and Jane seem like real people. People who don’t always know the answers and who make mistakes and missteps along the way. A final quote shows how Gabe and Jane discover how each compliments and helps the other. How each gives to the other and how much each gains from their love. B

“So, what happens now?” Marta asked.

Gabe looked at Jane. “That’s up to Jane,” he said.

Her heart swelled and soared.

She looked around at her family and took Gabe’s hand.