“A mom in her early fifties, Clover knows she no longer turns heads the way she used to, and she’s only really missed when dinner isn’t on the table on time. Then Clover wakes up one morning to discover she’s invisible–truly invisible. She panics, but when her husband and son sit down to dinner, nothing is amiss. Even though she’s been with her husband, Arthur, since college, her condition goes unnoticed. Her friend Gilda immediately observes that Clover is invisible, which relieves Clover immensely–she’s not losing her mind after all!–but she is crushed by the realization that neither her husband nor her children ever truly look at her. She was invisible even before she knew she was invisible.

Clover discovers that there are other women like her, women of a certain age who seem to have disappeared. As she uses her invisibility to get to know her family and her town better, Clover leads the way in helping invisible women become recognized and appreciated no matter what their role.”

I fell in love with your first book “Julie and Romeo” then wryly laughed my way through “Step-Ball-Change” though I will admit to failing to keep up with the books after that. So many books, so little time. I did remember that first book from time to time and say “I need to see what she’s written lately” so I was a happy bunny when we were offered your latest book for review. After reading it, I’m glad to discover that your gentle, humorously zinging style is still humming along. 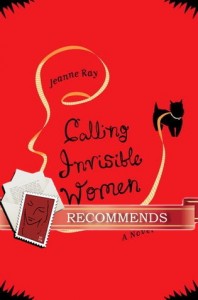 I have heard the sayings for years – that older women become invisible to strangers then to family, that older women are overlooked, that older women fade into the background. Maybe this is why older women turn to purple to stand out? Since I’m headed towards this age, the plot made me sit up and want to read the book. But to Clover, it actually comes true. She also discovers that it leads to some freedoms. If no one cares what you wear, then you can wear anything, go anywhere, say anything and shrug your shoulders saying “the hell with it.” I’m understanding my mother more and more lately.

The book is more women’s fiction – even older women’s fiction as Clover ponders her two children 20 and 24 which might be a turn off to some but the marriage she has is a sturdy one and I enjoyed seeing how it’s held together over the years, though it does take her busy doctor husband a while to catch on to the obvious. Still, once he does he proves that he’s one of the good ones as he rallies to the cause.

Vlad and Nick and Miller, the young men of the story, give me hope – they’re basically decent guys who’ve been raised right by their mommas – which is high praise in the South. Daughter Evie I wanted to shake. Just wait til she gets older and some of that Beautiful Woman light begins to fade and she can’t get by on her looks any more. I hope Clover is still there to gently let her in on “life after your youth is past.”

There are things here that the reader is required to accept: that there is an army of invisible women out there and that some people have actually noticed this – as in the case of the nurse or the teacher Lila Robinson who got fired after fading away – and that it hasn’t become a headline news story. With all the 24 hour news stations desperate for copy and something to fill air space this stretches credulity but that’s what must be believed. Okay, fine. Clover’s initial reaction – stunned panic – makes sense as do her practice efforts about how to live with it and get around in society. Her finding the help group would be a Godsend of support – emotional and practical. There truly are support groups for everything these days.

Yet I’m surprised that it’s taken the Invisible Women so long to confront the pharmaceutical giant responsible for manufacturing the meds that turned them invisible. Or that Jane, the woman who’s devoted so much time to haunting their headquarters, reading mail, listening to conversations and being able to find out so much about what’s going on there, wouldn’t have confronted TPTB there or have met with the chemist who agreed to talk to them. She and Clover are remarkably calm in the face of his brusque response to their enquiries. I think I would have acted on Clover’s thought to overturn his desk and run amok. I’ve always wanted to run amok.

Still, once the ladies make up their minds and decide that they are “mad as hell” and they’re not going to take it anymore, they get organized via Social Media, T-shirts, picket signs and physical presence to make their voices heard and their demands known. Power to the invisible women!

But there’s more to this book than just one women or some women who feel that they were practically invisible to their families, coworkers and friends before actually turning invisible. Clover discovers that there’s a lot she doesn’t know about her husband and son. So the question is, how much do most of us really see those around us? Beyond how the presence or lack of it of those people impacts us and our day, how much attention do we pay to them and how much should we? That’s a sobering mass of thoughts to think on. B