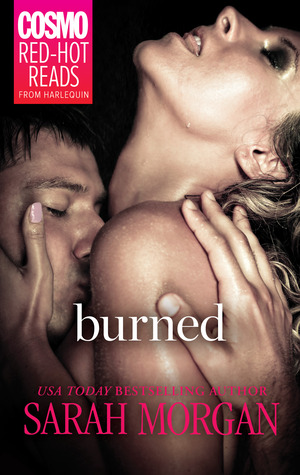 I enjoyed the novella Ripped, but found it leaned more towards chick-lit than I like, with its humor based on the narrator’s humiliation. The sequel Burned gets the balance just about right, combining many of the usual elements of contemporary romance with a fun, fresh voice and an emphasis on being loved for who you are.

Rosie’s boyfriend has picked the worst possible time to break up with her. It’s not like she’s in love with him — “do I look stupid?” she asks rhetorically — but her job as a physical trainer has been threatened by a buy-out, and her sister’s recent happiness has made her more aware than usual of how lackluster her own love-life is. “It wasn’t as if I thought Brian was my happily-ever-after. But happy to the end of dessert would have been nice.”

But the hits have just started coming: as Brian finishes telling her how unfeminine and threatening she is, Rosie realizes that the man listening at the next table is Hunter Black.

If you’ve read more than five contemporary romances, you know the rest: Hunter is, of course, the new owner of her fitness club. And he obviously still has strong feelings for Rosie — and she for him. But Rosie isn’t just fearful about being hurt again; she’s disgusted by the person she was when she was with Hunter:

It embarrassed me to remember how pathetic I’d been. The memory was so humiliating I tried not to think about it. I tried not to think about him. Deep down I knew he’d done the right thing to break it off — although I don’t think he needed to have been quite so brutal in the execution. I’d been so clingy, so dependent, so good at leaning on him I’d forgotten how to stand upright by myself.

Despite the bad break-up, Hunter genuinely cares for Rosie, and he’s just about perfect for her. He loves martial arts as much as she does, and he’s proud of her strength and skill, not threatened by it. But Rosie is scared to let herself depend on anyone again:

‘I fight my own battles. I comfort myself when I’m low. I have a secret stash of chocolate for that purpose.’
The corners of his mouth flickered. ‘Being able to do those things for yourself doesn’t stop someone else doing them alongside you.

I really liked Rosie’s voice; it’s wry, funny, and vulnerable. I also liked how much was packed into this short novella — it’s definitely focused on the romance, but Rosie’s relationship with her sister is very important to her, as is her job and her love of martial arts. There’s a nice sense of place, and the ending, featuring the London Eye, was swoon-worthy.

I was less crazy about the constant emphasis on how incredibly hot Hunter is, and the way Rosie’s descriptions of their physical interactions sometimes felt like she was talking about it more than feeling it. This is a pretty typical current romance style, but that doesn’t mean I have to like it. I also found myself thinking of Liz Mc2’s criticism of Ripped:

“And much as I enjoyed this book I found myself wondering if the novel didn’t do to Hayley a bit of what her nasty ex Charlie did: belittle her, and deny her skills. She’s an engineer (of some vague kind): isn’t the size of a dress in relation to the size of one’s breasts, and the strength of its seams, basically an engineering problem? I could accept that her pride made Hayley agree to be bridesmaid for her ex and the friend he dumped her for, but does that pride have to extend to not insisting her puke-yellow condom dress is the right size?… Do we have to go as far as exposing the heroine’s breasts in public so she can be rescued by hot hero Nico?

It’s interesting that Burned does precisely the same thing. Although Rosie is a skilled martial artist and excellent at self-defense, she still winds up in a dangerous situation too big for her to handle and has to be rescued by Hunter. It’s like the books are saying, it’s okay to be smart and strong, and some man will love you for it… as long as he’s smarter and stronger.

Despite those complaints, this was a lot of fun; I think it’s a standout in its “short sexy reads” genre. B