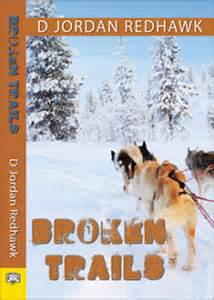 Scotch Fuller has already run the Iditarod three times and is preparing for a fourth attempt. Her single-minded focus on the rigors of training allows her to forget the shocking loss of her lover in a tragedy for which she blames herself.

The only race Lainey Hughes runs is away from her past and into the bottom of a bottle. After a devastating injury in a war zone, she’s continued her photojournalist career in the natural beauty and warmth of Uganda. A trip to Alaska to cover dog sledding is not what she wants, but the lure of a paying gig proves too tempting.

Lainey trusts her camera and Scotch trusts her dogs—and neither cares much what the other thinks…not at first.

The description of your latest book had already caught my attention before I read the glowing review at Ladylike Book Club. Since I have a long time fascination with the Iditarod – ever since reading “Winterdance: The Fine Madness of Running the Iditarod by Gary Paulson and “My Lead Dog was a Lesbian” (no, I’m not trying to be funny, that really is the title) by Brian Patrick O’Donaghue – I probably would have read it anyway but the other review sealed the deal.

From the blurb, I hadn’t realized that Lainey would end up running the race as a rookie or that so much time would be spend in months long preparation for the March race but this allowed for some in depth, behind the scenes insight into just how much effort goes into sled dog racing – tons – and how grueling it is for the mushers – unbelievable. By the time the race arrives, I was mentally exhausted.

But I was loving all the information. I enjoy a book where the characters are given unusual occupations or a unique event takes place and this book has both. Better still, instead of being mere window dressing, they are integral to the plot, well researched, and seamlessly integrated into the whole.

When the mushers and their dogs set off from Anchorage, the real endurance begins. Reading about Scotch’s efforts to win the race and Lainey’s to merely finish it, I truly understood that this race ain’t for sissies. If you’re not prepared, you could die. If you don’t take proper care of your team, you all could die. Worst of all, even if you do everything right, the conditions could still be enough to cause you to scratch after all that hard work. Or die. Being in Lainey’s head as she navigated and experienced the race was almost like being there but it also convinces me as nothing else could that following from home via the official race website is the way to go for me.

Ah, but where’s the romance? For the first third of the book, both Scotch and Lainey play the is-she-isn’t-she guessing game and lust a little as they’re dishing out dog chow and taking the dogs out on trail runs. The mental lusting never becomes as bad as some books I’ve read wherein the characters practically stand in a daze of drool. I do think readers should anticipate that the sexuality is low key for a good long time. When Scotch and Lainey do finally get a chance to jump each other’s bones, the jumping is delicious, sexy and nicely done but it takes a while to get there.

Scotch and Lainey also have other issues to deal with namely a disastrous past romance for Scotch and Lainey’s alcoholism. Of the two I felt the alcohol issue got more page time and attention. You don’t hesitate to show how addicted Lainey truly is, how it runs her life and how hard she denies it. As the book ends, each woman is coming to terms with her issue and things are looking up but I would like to have gotten more insight into the demon of Scotch’s past.

As an exploration of what goes into the training for the Iditarod – both for mushers and dogs – I think the book is great. As for the romance, I’m afraid that takes a back seat to the race so readers looking for a more even balance or a book heavy on the relationship will probably be disappointed. I like that not all the loose ends are tied up, that Lainey and Scotch both know there will be more work needed for their past and present issues but also that they’re committed to solving their problems and building a life together. B