After I read Knight, I thought for sure that I wouldn’t read another book by you. But then, I tried another, and another, and another. I read five of your books in a weekend. I have a hard time putting my finger on why your books work so well for me. The truth is that they have a ton of writing “ticks” that make me crazy. For instance, I’m not 100% convinced that you know the difference between the word “past” and the word “passed” – they’re not actually interchangeable. You focus on minute details that are of no interest to me, like the color of the fringe on a shirt and ridiculously detailed descriptions of the interior of houses. Your heroines tend to blurt out bizarre things, and the hallmark of a Kristen Ashley hero is being an overbearing alphahole. Yet, since the beginning of May I’ve read eighteen of your books. There is something about them that I find crackalicious. So of course, the moment your new Colorado Mountain series book, Breathe, came out, I bought it and read it in practically one sitting. 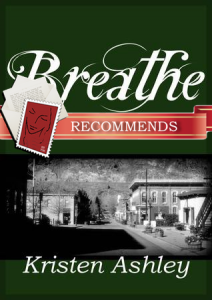 Faye Goodnight is the shy town librarian in Carnal, Colorado. She’s been in love with Detective Chace Keaton since she was sixteen, always from afar. Readers of the series know that Chace spent about six years undercover infiltrating a ring of dirty cops. He helped uncover massive crimes by the town but got his hands pretty dirty in the process, and feels deeply responsible for the death of his estranged wife, Misty. Misty and Chace’s marriage was in name only (she used information she had about his father as a bargaining chip), and he really never even liked her, but she died a horrible death, and he’s never shaken his feelings of responsibility.

When Faye spots a young boy who has been badly abused near the library, she heads to the police station to report the crime. She’s been encouraged by her girlfriends to kiss Chase to show him how she feels. So when he arrives to take her statement about the abused child, she bucks up her courage and lays one on him. Needless to say, Chase is taken aback, and does not react well. He lays out for Faye the ways he’s not interested. Heartbroken, she tucks her tail between her legs and flees. But Faye’s actions have spurred Chace to action. He’s always been interested in Faye, but wanted to avoid any involvement so as not to taint her with the filth he’s been involved with. His relationship with his father is terrible, and he’s still terribly guilty about Misty’s death. However, now that he’s had a taste of Faye, he can’t seem to help himself. Once they begin to spend time together, it takes no time for Faye to fall in love with him. Chace, realizing that Faye is a virgin, takes it very slow with her, but once they make love for the first time, their relationship ratchets up quickly. But Chace’s involvement with the dirty cop ring has captured the unwanted attention of men who work with his father, and soon, they’ll be after the one person Chace values most, Faye.

In thinking about whether I could recommend this book, I had to think about why it is that it worked for me. I am a total sucker for an alpha hero, and an even bigger one for one who is willing to grovel when he screws up. And Faye is not willing to allow Chace to walk all over her, which is refreshing. I also liked the sparks between the two of them. You excel at writing really wonderful, evocative sex scenes, and this couple had fantastic chemistry that I really enjoyed. As always when I read one of your books, I finished Breathe and immediately wished that I had another by you to read. Alas, I’ve read all of your backlist that interests me, so I’ll just have to wait for your next book to release.

When I ponder how to grade your books, I think that there is almost a special “Kristen Ashley grading scale”. Your books have numerous issues and could really flourish with some professional editing. I often find myself skimming through your exposition, as it doesn’t necessarily add anything to the story. And without fail, the bad guys kidnap your heroines so the hero can charge in and save the day. So when I say that this book is a B-read, I mean it’s a B-read within your collection of books. Meaning that the book has a number of issues that I’m not sure would work for some readers, but I blew through it and enjoyed my return visit to Carnal, Colorado. I believe readers who are seeking a series to go through like Pringles (no one can eat just one) will enjoy reading your books and will be back for more. Those readers who are already addicted to your writing will find this book to be as crackalicious as the others in the series. My grade for Breathe is qualified B.