My takeaway memory of this book was me gripping my book and saying “oh no she didn’t”. And by she, I meant you, and by “oh no” I meant, wow, I didn’t see that coming. If a reader is looking for a book containing a great special operations (former SEAL, in fact), this would fit the bill. It has a smart and capable heroine, a powerful and adoring special operations hero, and a thrilling action/adventure storyline. 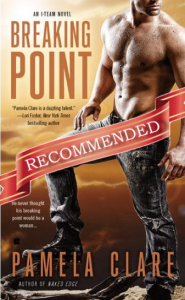 Natalie Benoit moved away from New Orleans after Katrina. She had lost so much that just being there hurt her heart. She took a job with Denver Independent and while she loved her job, she wasn’t loving her life. She felt stuck and in an effort to snap out of her ennui, she takes an assignment that brings her to Mexico. She is captured by Los Zetas, a criminal organization, and taken hostage. In her dirt cell, she meets Zach McBride, former Navy SEAL, and current DUSM.

Zach was undercover seeking intelligence information that would lead to the capture of Arturo Cesar Cardenas, the head of Los Zetas. He receives a tip but it is ultimately betrayed by a female who must have been in the employ of Cardenas. The two bond over their shared captivity, one from which Zach believes they will not escape. Zach’s goal is to make sure he doesn’t reveal any information via interrogation before they kill him and after questioning by Natalie, he frankly tells her that her fate is likely rape over a period of days or weeks after which she will be sold and killed. In some gallows humor, Natalie responds “M-my mother always told me there’d come a day when I’d regret asking so many questions.”

Natalie has to trust Zach even though credible circumstances lead her to believe that Zach stole cocaine from Cardenas. Some of Zach’s exploits seem far fetched but given what we know about SEAL training which includes Hell Week, a week of training that is five days of intense physical training wherein the trainees get only five hours of sleep the entire week. Consider that to even be considered for the program, you must be able to swim 500 yards within 12 minutes 30 seconds; perform 42 push-ups in 2 minutes; 50 sit ups in two minutes (I can actually do this so …); run a mile and a half in under 11 minutes. I find it believable that Zach, after days of torture, could have enough reserves to take action. And I appreciated that Natalie was not portrayed as a helpless woman even though she didn’t have the physical prowess Zach possessed.

. When it came to fighting, her only assets were her intelligence and her courage.

That’s why Zach had been trying all night to prepare her mind, channeling more than a decade of combat and law enforcement experience into a few stolen hours.

This book is full of action and adventure but more importantly, an emotional plotline between Natalie whose heart had never really restarted after her Katrina loss and Zach who had always wanted the wife, kids and home but after the war was never able to find that right person. At times, Zach even believed he didn’t deserve to have that kind of contentedness.

Many of the characters of previous books appear, particularly the guys because there is action! and adventure! and if one finds themselves in Denver, CO, then these guys are going to show up. I didn’t mind their insertion because it was a natural inclusion. Given their roles in past books, it would be more odd for them not to appear.

However, I did feel like the biggest part of the plot relied on what I considered to be a coincidence. It didn’t bother me, but it didn’t quite fit into authenticity that permeates every other part of the story.

Finally, this story, unlike many RS books out there has a high degree of sexual tension. You never close the bedroom door and the physical attraction and the consumation of that attraction is just as exciting as when characters are rappelling off the roof in the cold rainy night.

So for that scene where I went “Oh no she didn’t” (which was accompanied by an audible gasp), I won’t reveal it because readers have to discover that scene themselves. But I will say so many stories in romance take a disneyfied approach where a person is captured by a bad guy and nothing bad ever really happens to them which isn’t very believable. Bad things happen to good people in your books and that makes the HEA all the more precious. B