REVIEW: Break Me Down by Roni Loren 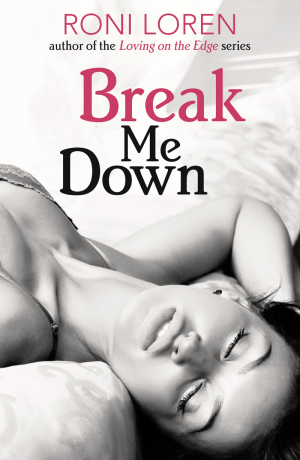 Trigger Warning: domestic abuse, attempted rape, (neither by hero or heroine), rape fantasy. These scenes aren’t terribly graphic but they may nevertheless be a problem for some readers.

After Sam is assaulted (not raped) on her way home from work one night by a couple of yahoos who had been mouthy at Sam’s bar earlier in the evening, she is shaken and vulnerable. She wants to dominate someone to center herself and find her strength. However, Grant, the owner of The Ranch puts a halt to that. She is in no state to participate safely in a scene.  Gibson is present at The Ranch at the time. He is concerned about his friend and follows her to her (deceased) grandmother’s house. The house is a couple hours away and remote, with limited cell coverage and spotty power connection. Sam is renovating the house as a project. She had planned to spend her week’s vacation there anyway, she just left a few hours earlier than expected.

When Gibson arrives, Sam is angry. She is not some damsel in distress and she doesn’t need his help. However, he is not budging and they call an uneasy truce. The forced proximity leads Sam to once again propose that Gibson submit to her, but this time, it will be only for a week and only when they are at her grandmother’s house. No-one will know and it will be a period out of time, just for them. Gibson agrees.

Oh my lordy lordington, their scenes are super hot.

The barrier for Gibson isn’t that he’s full of pride and has to be alpha. He was physically and verbally abused by his father when he was a child. He was told he was weak and pitiful and pathetic. When he was being beaten, he coped by not crying, not making any noise, not showing any weakness. It was his way of “winning”.  He doesn’t know if his sexual desire for pain and humiliation (he’s also a masochist) would have happened anyway or if it grew out of the abuse he suffered. For him, it is all twisted together in a filthy, horrible knot. He can’t separate those things; he wants to, but he doesn’t know how. He has occasionally paid for time with Dommes at The Ranch but there was never any sex and no full nudity and it was always very discreet. The thought of him being seen submitting to Sam or any other woman (or man for that matter – it’s the submission that’s the issue, not the gender of the dominant – although he is straight) is something which makes him panic. He hears his father’s voice and he’s suddenly back to being a child suffering the abuse of a parent who was supposed to love and care for him.

“But you standing up and saying, hey, I like to tie up guys and dominate them is a sign of strength. Toughness. For me, I don’t know how to admit that I like the things I like without feeling like a failure as a man, like I’m confirming something others knew all along. That I’m soft or needy or whatever.”

Sam doesn’t see Gibson’s submission that way at all – of course. In fact, she thinks it is the Dom/me who is needy in the D/s dynamic, if anything. She tries to share what she sees in him, so that Gibson has a viewpoint other than his father’s to draw upon.

“And you know why I want you so much, why I couldn’t move on? Because you’re strong and sexy and smart. And cocky as shit. And you make me laugh.” She laid her hand on his chest. “And because there’s nothing that turns me on more than a guy who’s tough enough and confident enough to give up control to me.

It isn’t enough. The “key” for Gibson is something else altogether. I won’t go into what it is or how it works out but I will say that it made perfect sense to me and I could see how Gibson made such a radical shift in his thinking.

I enjoyed everything I read very much but I would have liked a little more about Gib’s experience of submission. One of the sex scenes was cut short (a pity) and I’d have liked to have seen it on page and to see Gibson experiencing subspace with the awareness that was what it was. Up until he agreed to the week with Sam, he had never allowed himself to let go enough to get anywhere near it. Truth be told, he didn’t intend Sam to get him there either, but their connection and what he allowed her to do (there is nudity and sex, a place Gib never went to with any other Domme) makes it impossible to hold back.  I’d have liked to have a scene where Gibson was fully enjoying his submission instead of conflicted and resistant to it. There was a scene at the end which was kind of that, but it was brief and it didn’t give me quite the picture I was hoping for. It was scorching hot. I’m not complaining. I’d have liked to have seen what went on after the St. Andrews Cross a little earlier in the book though. That was the scene which was cut too short for me.

I liked this one very much. I was tossing up between a B+ and a B for the grade – it  was a very close call. I’m going with a high B because I really wanted that scene with Gib flying and loving it.