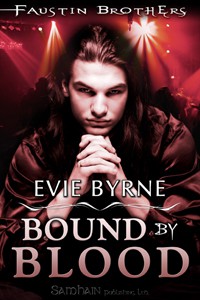 I cannot recall what my impetus was for buying this book but I did and I was glad for my impulse. I have been in a paranormal romance reading lull and frankly, my appetite for vampire romances is at an all time low (near flatlining, to be honest). I will admit I had to block the cover image from my mind as sulky boys are not my thing.

Gregor Faustin is the middle vampire in a family of vampires. They live a fairly normal, albeit wealthy, existence in New York. He’s enjoying his life and getting ready to open his newest New York City nightclub when his mother announces that she dreamed of his perfect mate, along with her name. Gregor is not excited about this:

In ye olde tymes, Gregor would have taken the slip of paper with his intended’s name on it, sought her out that night, carried her to his castle, fucked her senseless and drained her half dry. The next night he and his new bride would have celebrated by eating their own serfs or something.

Thankfully the dark ages were over. Marriage and breeding were fine for some, but he had better things to do.

(ha ha ha, eaten their serfs, ha ha ha). Wait, am I the only one who thinks that is hilarious? Gregor decides to ignore his mother’s prophecy but his brothers are delighted to hassle him and they find out that she is a librarian at the NYC library. His brothers are not the only ones hassling him about his bride. Gregor’s mother is demanding that he not ignore his destiny.

Laughing at fate, Gregor learns, is dangerous because fate will find you and kick your ass. Gregor ends up hitting a pedestrian who just happens to be Madelena LÃ³pez de Victoria, his bride. Maddy doesn’t want to have anything to do with him because a) he ran over him and b) he looks like he may be part of the Russian mob and c) for reasons she is unwilling to divulge.

Gregor takes Maddy back to her apartment and through her dreams tries to heal her. But in the process, he partakes of some of her blood, not her true heart blood, but a tiny bit from a wound on her head and “gamey, bruised blood he’d drawn from her ankle.” This blood changes Gregor’s internal chemistry. He now only really wants Maddy’s blood and Maddy’s body.

Maddy is attracted to Gregor but for her own reasons can’t become involved. Eventually she succumbs to Gregor’s relentless seduction to have a glorious fling with him.

You played with the fate thing well by constructing a conflict that threatens to bring one of the couple lifelong torment. In other words, destiny or fate serves not only to bring the couple together but to cause them immeasurable pain if their coupling is not long lasting.

The weakest part of the story was part of the vampire worldbuilding. There were significant contradictions. Right after leaving Maddie, Gregor watches his brother feed off another woman and those blood smells arouse Gregor and make him think of Maddie. Yet, a couple of pages later, Gregor is admitting he hasn’t eaten because even the thought of another woman’s blood or body makes him slightly queasy. There wasn’t a full fleshing out of the vampyr myth either such as life expectancy, vulnerability to disease, creation (i.e., do both parties have to be vampyr’s to procreate? I think the implication was there that this is true).

I appreciated that there wasn’t a cop out on Maddy’s storyline and that things weren’t completely magically fixed by Gregor and his vampyr blood.

The best part of the story is Maddy and Gregor. Maddy is smart mouthed and Gregor is the reluctant pursuer turned passionate lover. The story is very sexy and I would recommend it for those who don’t mind the fated mate concept. Read the excerpt because the voice is true to the excerpt.

I wondered if this story was somehow inspired by a movie from 1993 (don’t click if you don’t want to be spoiled). I don’t want to state the name of the movie for fear of spoiling anything, but would love for that to be confirmed or denied.

In any event, I enjoyed this book well enough to seek out the other book in the series. I hope to read more from you in the future. B.

→ Jane
Previous article: You Are Not My Mom
Next Post: REVIEW: Such Is Love by Mary Burchell