We have followed each other on Twitter and I’ve enjoyed your Medical romances for Harlequin/Mills & Boon, so when I was offered the chance to review your single title contemporary romance, I grabbed it. The story features an Australian nurse and an American architect who meet cute and by accident. With its small-town setting, older protagonists, and lack of tiny children, Boomerang Bride reminds me of some of my preferred authors and books in the SuperRomance line, but its added length allows it to have a strong secondary romance as well. 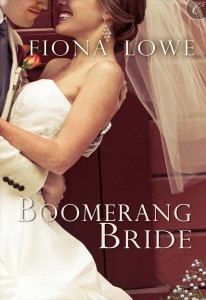 Aussie Matilda Geoffrey finds herself in Hobin, Wisconsin just before Thanksgiving, flat broke, because she’s been robbed of all her money by a long-distance fiance who turned out to be a scam artist. Even if she could go back to Narranbool, she has no family and she’s thrown up her job. After several awkward and humiliating events, Matilda winds up with two temporary jobs as she tries to figure out the rest of her life. She sets up as a wedding consultant for a Hobin bride-to-be and she becomes caregiver for the sister of Marc Olsen, a Hobin native who escaped to New York and became an accomplished architect. Marc only comes back to town for the occasional holiday and keeps his visits with his mother and sister short and detached. Marc intends this trip to be just as short, but the reason Lori needs home help is because she has recently been diagnosed with breast cancer and has to undergo surgery and possibly chemotherapy and radiation as well. Marc sees Matilda as his lifeline, allowing him to go back to his New York life after arranges for Lori to be taken care of.

Despite being the foreigner, Matilda fits into Hobin life quickly and comfortably. Hobin may be in Wisconsin, but in many ways it’s not that different from Narranbool (well, except for the cold, and Thanksgiving, and football). Indeed, Matilda is welcomed into the community and Marc feels like the outsider, and this becomes the real conflict that keeps them apart. Matilda finds in Hobin a life that might just replace what she has lost in Narranbool, while Marc resists returning to a town which holds both love and childhood pain for him.

This is not a small-town-good, city-bad kind of book, even though Hobin is definitely a small town (the nearest “big” town is Wausau). The digs at Chicagoans coming to Wisconsin for vacations and rural life are affectionate and accurate (I say this as a former Chicagoan who went to Wisconsin for vacations and rural life). The author does a great job of creating a credible American setting, and although I had to suspend disbelief that Matilda could pick up two (part-time) jobs in this economy, at least they were believable jobs.

The secondary storyline of Lori’s breast cancer diagnosis, treatment, and aftermath is very well done. The author writes for the Medical line and she gets almost everything in the American setting right. For readers who have trouble reading about breast cancer, this may be triggering. As a survivor, I found it entirely authentic; my particular treatment experience was different, but this trajectory was one I recognized as all too familiar. Lori’s fear of the disease, fear of losing her femininity and her sense of self, and her worries for her family were all sympathetically portrayed and at times painful to read, which made her secondary romantic storyline that much more satisfying.

Perhaps because of my perspective, I found that Lori’s romance almost stole the show in this book. Matilda and Marc are well developed characters, though, and the ups and downs of their relationship were fun to watch. There was a little too much bickering at the beginning, and I got tired of the nicknames (“Viking” only works for me for a short while). But for the most part these are two intelligent people who are attracted to each other but have different life plans. This sizzling attraction leads to a sexual relationship that does not instantly result in a Big Mis; they are adults, thank goodness. Marc’s difficulty in being more than a casual visitor to Hobin is exemplified in his relationship with his nephew, Kyle:

Kyle ambled in holding a bowl brimming with ice cream and stood watching.

He’d tried the good-game compliment in the car and had got a grunt in reply. He clicked in another piece of the spaceship.

“That doesn’t go there.” Kyle put his bowl down on top of the barn plans and flicked forward a few pages in the build guide.

Don’t spill food on my plans. Marc managed to bite back the sentence that teetered dangerously on his lips. He stared at the model and noticed the piece Kyle had added changed the line. “You might be right.”

Marc heard the burgeoning man in Kyle’s voice as well as the challenge.

Gotcha, I win. With regret he recalled the snowball fight—the last time Kyle had faced him down and this time he was determined not to screw things up but to get them right. Make them right, but to do that he had to find the correct path to tread with this half boy, half man.

I’m making this sound like women’s fiction or a family saga, which the book is not. Rather, it’s a romance that is rooted in family and community. Matilda, the outsider, has lost her roots and misses that life, and Hobin provides a new opportunity for her. Marc has fled the responsibilities that accompany those famility and community ties, but he hasn’t abandoned them entirely. Their romance plays out against this family and community setting. The ending is a bit fairy-tale and I could have done without the epilogue, but I’m not a big epilogue fan anyway.

I don’t read a lot of small-town romances, so I can’t really say if Boomerang Bride fits into that category. But I greatly enjoyed the context in which Marc and Matilda’s romance developed, I believed they were right for each other, and I loved the rich, textured secondary romance.