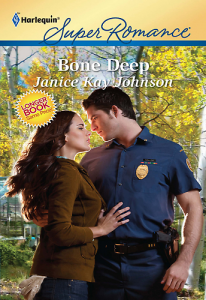 Kathryn Riley has always felt like an outsider at Sauk River. She wondered if the community’s cold shoulder arises not just from the fact that she wasn’t born in the community but also because her husband disappeared 4 years ago and hasn’t been seen since. Some still believe that she might have killed him so the award for Snohomish County Business Owner of the Year is more meaningful to Kathryn than to any other ordinary business woman.

Her elation is cruelly interrupted when Kat begins to find bones in her nursery, some in her compost, others in her desk drawer. There are the bones of her missing husband. Kat doesn’t hesitate to bring this to the attention of Chief Grant Haller but the appearance of the bones cast doubt on her innocence and tarnishes her award, but more importantly strips away the new found sense of belonging and confidence.

Grant Haller and Kat have a past, one that involves an attraction when they were both married. Kat has avoided Grant ever since but she can’t deny to herself that she, either her body or some part of her heart, reaches for him.

Grant moved to Snohomish County, taking the Chief’s position in an effort to save his marriage, but there was more wrong than him simply working a difficult job in a big city and the small town, easier hours didn’t make it work for Grant and his wife. I wasn’t ever quite sure what was wrong with Grant’s marriage and frankly I wondered if Grant’s affection for Kat prevented his marriage from surviving. The book describes Grant as nearly struck dumb when he first meets Kat and that over the meetings that they would have together, his feelings for her grew. (or was torture, as Grant describes it).

While neither Grant nor Kat cheat on their respective spouses, there was a hint of infidelity that hung over their feelings for each other and I think that is what kept Kat away from him even after Kat’s husband disappeared. Kat also feared her attachment to Grant, the depth of her feelings for him.

Kat was a more fully developed character. Her marriage to Hugh, a serial womanizer, made sense given her past. She had lived in foster homes without any sense of place, home or belonging. Her marriage to Hugh, even if it was often devoid of affection and true intimacy, provided her all of the things her childhood was missing. She was grateful for what she had with Hugh and had little desire to look outside the bounds of their marriage. When he disappeared, Kat was devastated but not necessarily because she loved Hugh. Her emotional attachment to Hugh was more about what he represented than who he was.

The romance between Grant and Kat is slow evolving with Grant recognizing Kat was like a skittish wild animal that is easily spooked. I liked this, though, because it fit with the pace of the story. Hugh’s body parts turning up at various times and the mystery of who had killed him provides the action to move the story forward while the romance provides the emotional depth that allows the story to linger after the end. This is not to say that the suspense element overtakes the romance because it doesn’t. And truthfully, this is a Harlequin Super Romance that is on the explicit end. The love scenes were well done, allowing the reader to see how the sex, the physical was affecting the two emotionally:

Momentarily dazed, he looked at her long legs and pale belly and breasts, curves, convex and concave, hollows beneath her collarbones and the sharp points of her pelvic bones. She was too thin, and yet his eye could find no fault. She could put on fifty pounds and he wouldn’t then, either. It was her. Just her. Which made no more sense than it ever had.

“You have no idea?” he said rawly.

Her unblinking stare ate him up. Her fingers, splayed on his chest, kneaded as sinuously as a delighted cat.

Maybe she did. He’d seen her looking sometimes, too. It was those stolen, suspended moments when their eyes had met and held that had kept his hope alive. Foolishly, idiotically alive, he’d tried to tell himself a thousand times, but he hadn’t been able to let go of it. He’d never wanted another woman like he did this one. Never would. It was that simple.

The prose is strong and there is a lot of movement in the scenes and by movement, I don’t mean action but rather an ebb and tide of emotion that was carried through even the love scenes. This story is more serious in tone and the romance provided a tension release from the build up of the suspense and the earnest longing of Kat and Grant. I can’t wait to read more of your books. B