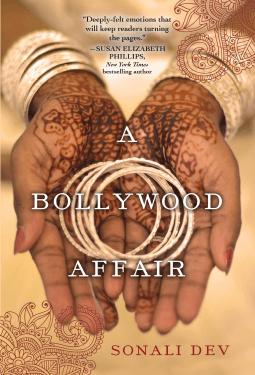 Mili Rathod hasn’t seen her husband in twenty years—not since she was promised to him at the age of four. Yet marriage has allowed Mili a freedom rarely given to girls in her village. Her grandmother has even allowed her to leave India and study in America for eight months, all to make her the perfect modern wife. Which is exactly what Mili longs to be—if her husband would just come and claim her.

Bollywood’s favorite director, Samir Rathod, has come to Michigan to secure a divorce for his older brother. Persuading a naïve village girl to sign the papers should be easy for someone with Samir’s tabloid-famous charm. But Mili is neither a fool nor a gold-digger. Open-hearted yet complex, she’s trying to reconcile her independence with cherished traditions. And before he can stop himself, Samir is immersed in Mili’s life—cooking her dal and rotis, escorting her to her roommate’s elaborate Indian wedding, and wondering where his loyalties and happiness lie.

This seems to be a popular plot these days as I’ve seen other similar set-ups – child marriage, one partner heads for the hills for years (really?) and then there’s the modern fall out that needs to be picked up. So my ignorant question is – how often does this truly happen in modern India? Or semi-modern as the marriage happened years ago and the principals would need to be adults now.

Samir is a man with a past – and a present that isn’t always heroic. He’s a playboy who has frankly enjoyed the sexual side of his life and who isn’t a stranger to the tabloids though from early on we can see his decentness peeking out from under the layers of scandal.

Mili and Samir share a devotion to family only in Mili’s case it’s a marital devotion to an ideal she’s lived with almost her whole life as well as to her devoted naani. Again with my lack of knowledge of a modern Indian woman’s feelings on this matter I have to just go with the idea that a woman would be willing to endure this. Mili is made more palatable for modern consumption by her drive and determination to get an education – even if she has to persuade her naani by means of improving herself for life as a military wife. Still Mili had the gumption to fight for what she wanted.

Through the elopement and (chaotic Punjabi) wedding of Mili’s roommate, we see something of what Mili missed with her Rajasthani wedding as a child. Non Indians who want an idea of what’s going on should watch “Monsoon Wedding” for a visual. This section of the plot also served to soften Samir up to the possibility of marriage, finding The One and how wonderful Mili is in even more ways as she effortlessly deals with her roommate’s family drama.

Even though Mili is not Samir’s usual “type,” from the beginning we’re given the information that he finds her the most beautiful woman he’s ever seen. Victory for all us short, curvaceous women! Even though he arrived in Michigan thinking her a gold-digging bitch, Samir is soon won over by her sweetness and lack of artifice – beautifully portrayed in such a way that I wasn’t going into a diabetic coma reading about it. He’s also rocked back on his heels by the fact that she doesn’t immediately swoon and melt at his handsome feet the way he’s accustomed to.

As these two get to know each other, I’m enjoying watching Samir being bent into a pretzel and his conscious astonishment of this even while it’s happening. The Rathod family might initially seem to hold all the cards but Mili’s given enough power in the relationship to balance the scales.

Yet … yet I kept wondering, why did Virat not take care of this earlier? Okay so he didn’t realize for years that sneaky bastard granddad hadn’t had the marriage annulled but as soon as he did, he could have initiated something and got the legal ball rolling. I also found it strange that there is almost no mention made of Samir thinking of his ulterior mission during the initial weeks he’s with Mili in Ypsilanti.

Until suddenly, all the secrets and misunderstandings get rolled up together as the fit hits the shan all at the same time. Every secret, everything that should have been mentioned and ironed out and fixed gets trotted out and we’re served an almost overdose of angst and drama. Yep, just like a Bollywood film. The tears, the drama, the heartbreak, the breakup, the separations all come at the same time before the grand fixing of all things gone wrong.

I’m glad to see everything come together in a glorious riot of emotion and family love but something about it felt too neat, too pretty and tied into a bow. In several later scenes I almost expected Samir’s family to burst into a choreographed song and dance number. I loved the characterizations, the “feel” of the book, the way Samir falls at Mili’s feet, the obvious love the family members have for each other, the descriptions … well a lot of things, but the Issues came to a head too close together and got prettily fixed too fast. B