“Shipwrecked and cast ashore in Japan with no memory of Temeraire or his own experiences as an English aviator, Laurence finds himself tangled in deadly political intrigues that threaten not only his own life but England’s already precarious position in the Far East. Age-old enmities and suspicions have turned the entire region into a powder keg ready to erupt at the slightest spark—a spark that Laurence and Temeraire may unwittingly provide, leaving Britain faced with new enemies just when they most desperately need allies instead.

For to the west, another, wider conflagration looms. Napoleon has turned on his former ally, the emperor Alexander of Russia, and is even now leading the largest army the world has ever seen to add that country to his list of conquests. It is there, outside the gates of Moscow, that a reunited Laurence and Temeraire—along with some unexpected allies and old friends—will face their ultimate challenge . . . and learn whether or not there are stronger ties than memory.”

Recently a friend and I were discussing the use of amnesia in book plots. She has a fondness for it, despite the inherent problem of the character needing to basically suffer from traumatic brain injury to achieve it, while I often can’t stomach the convenient head conk which brings it on to be followed by an equally “plot convenient” unconk to return the character to normal – with seemingly no nasty medical sequelae. A few days after our conversation I opened the arc I had of “Blood of Tyrants” and thought “God does have a sense of humor.” But it’s Temeraire and Laurence so I shrugged, girded my mental loins and dove in the story. 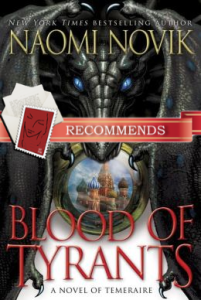 Blood of Tyrants by Naomi Novik, recommended by Jayne

When “Crucible of Gold” ended, we were still in Brazil but now the action has shifted to Japan. Laurence has been lost overboard during a horrific storm while attempting to save the dragons on the transport ship. In the face of all opposition, Temeraire is convinced of his survival and refuses to accept any other possibility. He will get that weaselly politico Hammond to make enquiries in Nagasaki – the only city in Japan currently open to foreigners – and takes advantage of networking opportunities with an American dragon who opens the eyes of the British dragons to the rewards of free trade.

Meanwhile, Laurence is desperately trying to keep his honor and his word as he is interrogated by Japanese authorities who are alarmed at his presence in the country. The trouble is, Laurence realizes he can’t remember what has brought him to Japan and is thus hampered in his replies. He does know that he needs to escape and head to Nagasaki or else face probable imprisonment. Taking advantage of every opportunity, he and a young Japanese man, bent on saving the honor of his master, strike out cross country before finally being reunited with the British.

Frankly, while this section of the book was interesting – learning about dragons in new countries always is plus we finally get to see some American dragons – it felt a bit as if I were treading water and waiting. For what I didn’t know but after a brief glimpse of Japan we were off again without any of the powder keg possibilities hinted at in the blurb. The keg is certainly there but no one comes near it with any incendiary devices. Will there be more time eventually spent here? I hope so as I felt a little cheated but if that time comes, it will be in another book.

Laurence might be back with Temeraire and Co but he still has no memory of the eight years he now knows he’s “lost.” To avoid straining his mental faculties, the doctor aboard the British ship advises that no one fill Laurence in on what he’s forgotten so for the next section of the story Laurence bumbles around trying to regain his memory even as everyone around him bites their collective tongues and refrains from filling in the gaps. The action then shifts to China, court intrigues and rebellion as Laurence slowly gleans bits and pieces of his past.

Though this part isn’t as dreadfully dull as dodging bunyips in Australia (“Tongues of Serpents”), mentally I was on coast. Why does Laurence need amnesia for the plot? Honestly, I still don’t know. I like that his loss of memory appears to be as much the fault of mental strain as it does possible head conking and that it is a character and situation bringing back events from his past that triggers his gradual recovery. But the whole section appeared to be little more than “Temeraire 101 – a Basic Intro to this Alternate Universe” as anything else.

The above mentioned character arrives in China bringing horrible news. Napoleon along with an immense army are on the march into Russia. Using negotiation skills and shamelessly reminding them that Laurence has been adopted by the Emperor, the British use their newly cemented alliance with China, along with the gift of a very special dragon egg, to gain the help of the crack Chinese aerial corps. This is when the book really kicked into high gear for me.

The contrast between the dragons of Russia and the almost autonomous dragons of China is a wonderful eye opening experience. While Temeraire has long bemoaned the treatment of most European dragons vs what he’s seen in the enlightened lives of Chinese dragons, he is almost speechless – as much as Temeraire can ever be called that – when he discovers what goes on in Russia. I thought the way this is reflective of the Russian serfdom of the age is a wonderful use of reality to shade fiction.

Most of the battles in the book take place here and as usual, you make them thrilling. One aspect of this series I’ve always enjoyed is how organic the inclusion of dragon combat becomes. It’s almost as if I can barely imagine the Napoleonic conflict without them there. The clash between the Grande Armee and the Russian Army – backed by Temeraire and the Chinese dragons – is both horrific and epic with the tide swinging wildly as various forces are brought to bear. Temeraire and Laurence also uphold their world wide reputation for social justice – alarmingly finding themselves on the side of the French in that respect.

“Blood of Tyrants” ends on a slight breather as one battle is over but another looms near. Napoleon is on the offensive, gambling everything on one final throw, and he’s unleashed a potent weapon that just might turn the tide of the Russian Campaign – if the Russian winter doesn’t defeat him first. Will Temeraire and Laurence be able to turn the weapon to their advantage? Will the simmering tensions in Asia hinted at but not delivered in this book erupt? Will Napoleon finally be stopped or is his march to world conquest in this alternate reality unstoppable? And what will happen to The Egg? I’ll be on pins and needles until I find out. B