For my next Heyer book, I thought I read one new to me which means pretty much all the Regencies. Or all the mysteries. Or most of the … gosh, I have a lot of Heyer catching up to do. Anyway, what attracted me to “Black Sheep” was the information that the main characters are all commoners. Yep, nary an aristo among the main characters and the titled characters got their filthy lucre in *gasp* trade. Though the well connected among the Bath set don’t hold that against them. 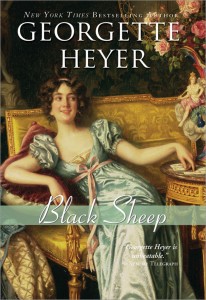 When Miss Abby Wendover finally arrives in Bath after a protracted five week stay at the home of her enceinte sister, she quickly realizes that her worst fears have been realized. An older, man about town fortune hunter – Abby’s just sure he is one of those odious creatures – has been making up to her “will be wealthy after she comes into her inheritance in 8 years” 17 year old niece. And what’s more, Stacy Calverleigh has bamboozled Abby’s eldest sister Serina to his side. Fanny is determined that she and Stacy felt love at first sight and means to have him as her husband. With visions of Fanny acting out and eloping if pushed too hard, Abby knows she has to tread warily in her efforts to thwart Young Love’s Dream.

A few days later, while in a hotel to visit some newly arrived acquaintances, Abby chances to overhear the name of Calverleigh and jumps at the opportunity to warn off Stacy outside of any chance for Fanny to overhear. Only the man who answers her query is far from young or handsome. In fact, he’s much older than Abby’s 28 years and brown as a nut. He’s also one of the rudest men Abby’s ever encountered and appears to take great delight in being so. Only, as the bewildering – on Abby’s side – conversation continues, it seems that he’s not young Calverleigh but Stacy’s older Uncle who got packed off to India 20 years ago after a Great Scandal. And once Abby has filled him in on Stacy’s plans and begged Miles’s aid in nipping the romance in the bud, he calmly assures Abby that not only does he not care a fig about the situation, he could care less about his nephew.

Aghast at the lack of feeling displayed by Miles, Abby still can’t help but laugh at half of what he says since he says exactly what’s on his mind and damn the consequences. For a woman who’s had to deal with her eldest sister’s various – and deeply loved – ailments plus a headstrong young niece plus two pompous older brothers for most of her life, the idea that someone isn’t tied to family merely because they’re family and who does as he pleases and says what he wants calls to something deep inside Abby.

But can she give into the exact same impulses which she’s trying to get Fanny to avoid? And how can Abby contemplate love when she still has to keep Fanny from throwing herself away on a bounder like Stacy? And what will happen when her older brother James finds out what’s going on in Bath? Is there a happy ending in store for anyone? Or will it take a former cad to set all right in the end?

All the Heyer books I’ve read up til now, pitiful though that amount is, have had humor to some degree and this one is just bursting with it. Oozing, overflowing and packed full of it. Abby and Miles share a sharp sense of the absurd and what with Miles being willing to voice whatever pops into his head, their conversations make the book for me. In fact, I think Miles is right up at the top of my “favorite heroes I’ve read this year” list. Whenever I knew I was going to get a scene with the two of them in it, I sat back and anticipated the fun.

And Abby certainly deserves fun for all the fuss she has to put up with from her sister and niece. Serina is one of those older women of that day who made a career out of their nerves and illnesses. She also flutters a lot and is prone to hysterics. It’s no wonder their menfolk preferred to be out hunting or in their clubs all day. It certainly drives James off after he makes his blustering appearance once everything is actually already taken care of.

Fanny isn’t a nervous ninny but she JUST KNOWS she’s really, truly in love in that way that only 17 and 18 year olds can be sure of and this knowledge has her wound up and ready to Do Something Foolish should anyone speak ill of her truest love. It’s to Abby’s credit that she doesn’t lock Fanny up in a room for 6 years. Abby also realizes, somewhat sadly, that even though Fanny does love her and Serina, she’s of an age when she’s ready to form outside friendships and spread her wings. Something Abby more than once steps aside and lets Fanny continue. The relationship between aunt and niece is a sweet thing about the book though Heyer never lets it turn maudlin.

But for all the praises I’ve sung about it so far, the narrative falters a bit in the third quarter. Information is repeated, scenes drag somewhat and I found myself soldiering on at times. Though new little nuggets of knowledge are sprinkled through this section, I can’t help but feel that some judicious pruning would have tightened things up and moved them along without losing anything.

The last bit does, however, do a lot to redeem the slowpoke stuff. When a final character is introduced to the story, I knew she would somehow resolve the issue of Stacy and Fanny but the way in which this is done is allowed to play out and there is great fun to be had watching Stacy be served a bit of his own medicine. But even knowing what was happening, I still didn’t realize just how delicious his just desserts were until a scene reveals all. The asshole decidedly gets exactly what’s coming to him and it’s served up as neat as can be.

But wait, there’s an unresolved romance still at stake! Abby almost buckles under to family pressure about pledging herself to a man of whom they do not approve. Even as I’m groaning about this, the way it’s presented is diabolically clever on the part of the main instigator and designed to strike Abby where she would be most likely to feel familial duty. Luckily for her Miles feels no such duty and, as he informs her, she might be willing to sacrifice herself on the Altar of Family but he certainly won’t let her sacrifice him! And thus he takes matters in hand and decidedly sees to their future and happiness in a masterful way.

I ended the book adoring the “Black Sheep” hero and the practical and, usually, level headed heroine. The villain gets his comeuppance, Serina will still have someone with whom to compare nerves, Fanny might have a romance in her future and James will probably think twice about issuing ultimatums to Abby once she has Miles at her side. If not for the draggy bits, my grade would be higher but the good that far outweighs the bad still comes out to a B for me.

→ Jayne
Previous article: REVIEW: Intervamption by Kristin Miller
Next Post: How Good Does a Book Have to Be At 99 cents?