REVIEW: Beyond Pain by Kit Rocha 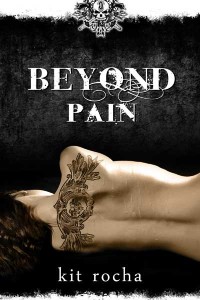 Six lived most of her adult life in Sector Three where she was essentially a toy. She’s learned to cope by shutting down. In Sector Four, anything goes so long as you are willing is the motto and this confuses her and entices her.

Six saw it over and over, every time an O’Kane woman took that stage. Power in the place of helplessness, pride where she would have felt sick and exposed. There was a secret in these women that went deeper than the ink around their wrists, and sometimes she thought if she watched for long enough, she could unlock it for herself.

Bren was former military police inside Eden but overtime the things he was asked to do eroded his sense of purpose but he still remained true to Eden. Eden took his loyalty and service and spit on it, allowing Bren to take the fall for a corrupt official resulting in Bren being cast out.

He’s found a new life and a new home in Sector Four as an enforcer of the O’Kane gang. Dallas O’Kane, the head honcho of Sector Four, sends Bren into their newly acquired territory of Sector Three to assess what the temperature of the residents of Sector Three. Who will be a problem? Who will need to be terminated? Who is an asset? For aid, Dallas recommends Bren take Six who knows Sector Three better than all of them.

Bren embodies the big, silent type. He doesn’t talk much and he likes to be in charge in the bedroom but he’s so very patient when it comes to Six.  Because of his strong sense of loyalty, his heart and spirit is still bruised from the betrayal from the leadership in Eden and unfortunately, this leads to conflict with Six.

The romance between Bren and Six seemed more intimate than the previous two and I’m not sure if it was because the type of sex that they enjoyed was limited to the two of them or whether it was because the writing made it so.  This book’s kink was voyeurism but the relationship was focused solely on Bren and Six (although there are strong hints at the future books such as Ace, Rachel and Cruz).  I do admit to being less than interested in the group sex and often find myself chafing to move on to find out more about the world in which they live; their fight with Eden; and the political struggles between the Sectors.  To me that is more interesting at times than how many people Dallas and Lex can fit in their bed at one time.

I know it is ridiculous to complain about the dirty sex when this is a series that is about the celebration of openness of physical relationships.  The sex scenes in these books are some of the best out there in the erotic romance world and I do appreciate the type of message the books send – that no sex, so long as it is consensual, is wrong or deviant or shameful.  Finally, I’m uncertain whether you can read Bren and Six’s story without having read Book 2, Beyond Control.  It sets up Sector Three’s acquisition and lays the groundwork for Bren and Six’s attraction. But saying that you have to read Beyond Control before Beyond Pain is a bit like saying you need to eat the pie with the ice cream. It’s no burden.

→ Jane
Previous article: REVIEW: Slave to Sensation by Nalini Singh
Next Post: What’s the right price of a book for you?