REVIEW: Between the Devil and the Deep Blue Sea by April Genevieve Tucholke

I’m a sucker for evocative titles. And if Between the Devil and the Deep Blue Sea is one thing, it’s evocative. It’s the type of title that overrides any misgivings I may have about mysterious bad boys who come into our heroine’s life. We all know that story, don’t we? But your debut puts a small town, gothic sensibility on a familiar premise and I was hooked. 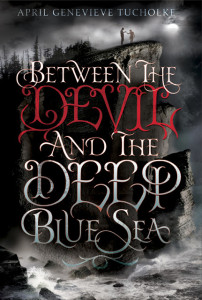 Violet White comes from old money. Her family is rich — or used to be, anyway. Their glory days are certainly behind them. Their family estate in the seaside town of Echo is falling apart. Since their parents are conveniently, and irresponsibly, absent, Violet is looking for ways to earn money. One way involves renting out the guesthouse behind their estate. She has no idea if anyone will take up the offer, but then River West shows up on her doorstep.

A bit of an odd duck, Violet has never before shown interest in boys. River changes that. She’s tempted by him in a way she’s never been and falls in love for the very first time. Except River’s mysterious past comes back to bite them with terrible consequences. And Violet will have to face an awful possibility: River just might be the epitome of evil.

I love the idea of gothic horror, but I often struggle with it. I didn’t encounter that struggle here. I fell into this novel and didn’t want to come up for air. From the family estate in its fading decadence to the White family’s numerous buried secrets, Between the Devil and the Deep Blue Sea was filled with creeping dread. For me, that is the epitome of horror. It’s not gore or violence. It’s the dread, the anticipation of the axe falling.

I liked Violet a lot. She was such an eccentric girl and I can only imagine how she was viewed by her high school classmates. But I adored how much she loved her grandmother, and how Freddie’s voice constantly came through in the narrative, even though she was already dead.

It made up for the fact that Violet’s parents suffer from the ever-common Absent Parent trope. Maybe it’s because I’m a child of immigrants but I can’t understand how parents could just up and randomly go to Europe on some kind of artist vacation with no firm ending, leaving their twin children behind to fend for themselves. Is this a rich person thing? Is this what it’s like to be so rich that mundane things like paying for food and electricity don’t even occur to you? Someone needs to explain this to me.

While I usually roll my eyes at the mysterious bad boy trope, it worked for me here. Violet inadvertently isolates herself. Unlike her twin, Luke, she doesn’t play any sports. She’s not part of any clubs. She wears her grandmother’s old-fashioned clothes. She thinks other people treat her differently because she comes from the White family and acts like it, which only perpetuates the cycle. So when River shows up on her doorstep, asking to rent the guesthouse and acting like she’s not strange or aloof at all, I can see why she’d find that attractive.

But River has a supernatural ability that has terrible connotations within the context of a relationship. Are Violet’s feelings for River genuine? I think so. Have they been manipulated? I believe so as well. And that’s what makes me pause. Because the romance takes on non-consensual aspects, and that’s uncomfortable to say the least.

In its defense, the narrative does not shy away from this. It treats the manipulation as the awful thing it is. Violet is furious when she finds out. I actually thought her struggle between knowing that manipulation was awful and succumbing because being with River felt so good was authentic for a teenager on the verge of adulthood. I think most people can empathize with this conflict. At some point in our lives, we’ve encountered a situation where we know doing something is wrong or is bad for us (or both) but we do it anyway and screw the consequences.

But because of all this, I couldn’t support the relationship between Violet and River. I don’t trust River not to influence Violet to get his way. It goes beyond my apathy towards bad boys. Psychically manipulating someone to make them stop fighting with you, even to the point of altering their memories, is awful. That’s not a healthy basis for a relationship. I know there’s a sequel forthcoming and I can say that River will have to work hard to make me believe a relationship between him and Violet would not be toxic.

Between the Devil and the Deep Blue Sea is the first YA gothic I’ve truly enjoyed. I think it’s because the novel partly reminds me of old school Stephen King, and I love old school Stephen King. I’m still reserving judgment on the Violet and River romance. I think it’s toxic, but River has shown that he’s trying to change — even if he keeps failing in spectacular ways. I guess the sequel will tell us whether he wins the battle against himself. And even though there is a sequel, this novel ends in a good place. There’s no cliffhanger and in fact, I think readers can consider it one of those satisfying open-ended conclusions. B