REVIEW: Between Sinners and Saints by Marie Sexton 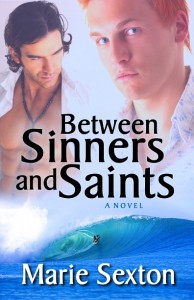 I’ve enjoyed your writing before, but it was Kaetrin’s review of this one that made me pull it out of Mt. TBR. I was interested in the concept and knew I could trust your writing. I’m glad I did, even if it wasn’t what I expected.

Levi Binder works in a gay bar and enjoys the “perks” of his position at least once a night in the bar’s storage room. He’s uninterested in relationships and is happy in his “work.” The only fly in his ointment is phone calls from various representatives of his Mormon family, trying to get him to see the error of his ways. Oh, and his hip and thigh, which after being abused by standing all night and then surfing during the day, hurt like a bitch. So he sees a neuro-muscular massage therapist (and I learned something new there–had no idea that neuro-muscular rehabilitative massage existed, let alone what it was). His therapist is Jaime, a quiet sort of guy who seems a bit skittish. Levi keeps coming onto Jaime, Jaime refuses and finally, when Levi won’t back down, kicks him out. And good for him, I say.

With the help of some friends, Levi figures out why Jaime not only won’t consider sex, but categorically refuses to be touched–he realizes that Jaime was probably sexually abused as a child. We already know this, because Jaime has thought about it, giving us a bit of an info-dump. Levi and Jaime work their way back to a professional relationship and then a friendship, because Levi now understands the boundaries, without ever actually discussing the sexual abuse with Jaime. He and Jaime also figure out that Jaime can sleep without nightmares in Levi’s bed because he finally feels safe, so they spend a lot more time together. But Levi starts to fall for Jaime without realizing it, and ends up changing as a result. First he tries to abstain from his easy bar sex and when he falls off the wagon spectacularly and dangerously with a bar patron, he quits the bar.

All of this is interwoven with Levi’s continuing struggles with his family, who variously want him to stop being gay altogether, or stop having gay sex, or stop having meaningless sex, gay or not, or stop working at the bar, his means to meaningless gay sex. But Jaime adores Levi’s large family (parents, Levi and five siblings, nineteen sibling offspring), and when Jaime and Levi finally start exploring the sexual side of their relationship, after they’ve figured out they’re in love, they have to navigate the shoals of Levi’s family’s disapproval, their place in it, Jaime’s past, and their growing love for each other.

I can’t believe that summary had to be so long, because the plot isn’t that complicated. It’s not a Romantic Suspense. No one has to save the world from the Big Bad. But it IS complicated nonetheless, with relationships and interpersonal tangles and the book is all the richer for it. Levi has a LARGE family, but most of the siblings and his parents have solid, individual personalities, which is a pretty good trick. Or, you know, damn hard work as a writer. :)

Here’s the thing, though: this book was an Inspirational. Now, admittedly, I’ve read one “true” Inspy in my life (Francine Rivers’ Redeeming Love), and while I enjoyed it in an academic way, atheist me doesn’t particularly want to read any more. And although this book is a m/m romance, it’s definitely an Inspirational, proving that the two are NOT mutually exclusive (and really, it’s only the Christianist h8ers who claim they ARE mutually exclusive). While I appreciated the writing and the characters and understood how the inspirational nature of the story was good and right, even necessary, for the characters, it was…unexpected to me.

Because the story is REALLY about how Levi finds his way back to the bosom of his religious family, finds his way back to his religious beliefs (although not necessarily to his church), through his relationship with Jaime. It is precisely his religious family who help Jaime heal. And Levi eventually believes that God brought him to Jaime, precisely as a gay man in a Mormon family, not only to help Jaime heal, but also to draw Levi back to his family. (Clarification: although the narrative itself is as much about Levi’s emotional journey as it is about Jaime’s, Levi’s own motivation is ALL about making sure Jaime is safe and happy. So while my description here might make Levi sound selfish, he really really isn’t. All he wants in life is for Jaime to be happy and to feel safe.)

Now, don’t get me wrong, the Inspirational aspects are brilliantly done. The story is utterly compelling. The characters were solid, consistent, even fascinating. And while I absolutely could see that anonymous sex was, indeed, wrong FOR LEVI, the book felt to me like an utter condemnation of anonymous sex for everyone (although, don’t all romances that believe in finding “The One” and living together in happy monogamy forever after, amen? I guess so). And it’s not like I felt the religion was pushed on me or was trying to convert me. I did NOT feel proselytized to in the slightest, like I did with the Rivers. But readers who care about this type of thing one way or another should be aware that Levi’s journey back to God is a huge part of this book.

There was one stylistic thing that made me want to scream. EVERY TIME Jaime wanted to talk with Levi about something difficult, he’d start massaging Levi’s hand. And EVERY TIME he did that, you’d tell us why:

Jaime found it easier to look back down at Levi’s hand rather than to face him.

He concentrated on massaging Levi’s hand, and Levi realized the massage gave Jaime a sense of security–he was relying on what he knew to get him through something that made him nervous.

Instead, he took one of Levi’s hands and began to massage it in a familiar way. It meant he didn’t have to look in Levi’s eyes when he started to talk.

All in all, you took serious risks with this book, as you did with Strawberries for Dessert, and the characters carry the day. But the sexual abuse and Inspirational aspect, no matter how brilliantly handled (and they are, don’t get me wrong), means this book probably won’t make it to my Desert Island Keeper file in Dropbox.