REVIEW: Before the Witches by Karina Cooper

When I first received the ARC to Blood of the Wicked, I set it aside. The title and cover looked clearly like a vampire novel and well, I just wasn’t in the mood for YAVR (yet another vampire romance). Then I received a promotional email that said something something “steampunk” and I ran to get the book. This book was a sexy steampunk romance???? Alas, no, the something something steampunk was a note that you, the author, were into steampunk. The book was not about vampires, I was told, but about witches. Witches? Meh. Witches and their woo woo spells really aren’t my thing. I packed up the book and sent it to Shuzluva. 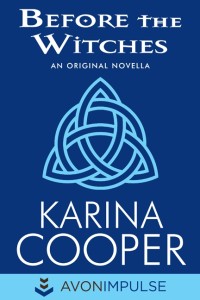 Then I received an email with an ARC of Before the Witches. Again, with the Witches! But it was one of the Avon Impulse titles and I wanted to see what they were putting out there as original digital fiction.

I could tell by the first page that these were not my mama’s witch stories. Katya Zhuvova is cast out or runs away because she has the gift of knowing, a witch’s gift. She ends up part of a Russian prostitution ring but servicing men on her back or her knees is better than being dead. Katya also doesn’t intend to stay in the whorehouse. She is working on a plan to free herself and the other girls (girls being the key word here). Vice detective Nigel Ferris intends to bring down the prostitution ring and poses as a dirty cop enjoying the pleasures of the prostitution house.

Before either Nigel or Katya can put their plans in motion, the world literally begins to fall down around them. He and Katya have an immediate and believable attraction. Through the course of the short, the two bond in a way that only survivors can. The writing is strong and the characters are vivid and the loss of life is high, making their bond all the more precious.

The setup and the length worked perfectly for this novella. In an apocalyptic setting, I think a longer story would have been hard to read and wouldn’t have ended on such a note of hopefulness. Additionally, I think the reader would have expected more exploration of the emotional losses both Nick and Katya suffered. However, it did provide a whole story with great action and a believable romance in about 90 pages and at $1.99, I think readers are really getting their money’s worth.

This novella was totally unexpected and in a good way. I flailed around my house looking for Blood of the Wicked before I remembered I had sent it off to Shuzluva. Avon, however, came to my rescue and sent novel to me. I’m a new witch fan, who knew?

P.S. The cover is kind of a disappointment. Not the fault of the author, of course, but … hope the covers get better, Avon Impulse.