This review took me far longer to produce than it should have. It was no fault of the book. The blame rests entirely upon my shoulders. But once I was able to clear some time to devote to reading, I devoured the first book in this series, Bright Young Things, in an afternoon. The same thing can be said about this book. What can I say? I’m a sucker for great relationships between female characters. 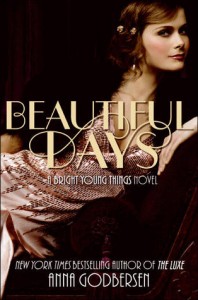 Beautiful Days picks up where its predecessor, Bright Young Things, left off, following the lives of three remarkable young women in New York City during the 1920s. Stunning socialite Astrid continues her tempestuous relationship with a bootlegger’s son, Charlie. Charlie’s half-sister, Cordelia, has joined the family’s illicit business after the violent murder of her father. And Cordelia’s childhood friend, Letty, continues to dream of becoming a star.

Things aren’t easy for them, however. Despite her newly announced engagement to Charlie, Astrid remains discontent. After the death of his father, Charlie has had to take the reins of the family’s bootlegging business. This leaves little time to spend with Astrid, who is used to being the center of attention and the darling of everyone’s eye. She dislikes taking second place to anything and the strain begins to show on their relationship.

Cordelia, on the other hand, feels inadvertently responsible for her father’s death after an ill-advised affair with the son of the family’s main rival. To make her feel better, Charlie puts her in charge of opening the family’s first speakeasy. Unfortunately, she finds her attention distracted by the straitlaced flyboy, Max Darby, who is the only man immune to her charm.

Meanwhile, Letty finds herself adrift. While she finds herself esconed in luxurious surroundings, it takes her far away from the city where she thought she’d find her destiny. Instead of becoming the star she thought she was meant to be, Letty shadows Cordelia and Astrid, being drawn into their lives and intrigue.

I won’t lie. This isn’t a deep book. It’s easy fluff. But it’s entertaining fluff, filled with glitz, glamour, romance, and a little action and intrigue. Essentially, it’s better-written Gossip Girl without the catty narrator. It’s not to everyone’s taste but if you’re in the mood for it, it can really hit the spot.

What I like best is that the focus remains solidly on the female characters. Yes, their romantic lives and interests do play a role in the story but why shouldn’t it? Their relationships with men are as important as their relationships with each other. I really enjoyed how different each girl was from another — and not in the stereotypical beauty, brain, and brawn sort of delineations either. All three girls are definitely beautiful but each in their own ways: Astrid is the stunning ingenue, Cordelia is the mysterious beauty, and Letty is the waifish starlet. Each behaved in completely believable ways relevant to their backgrounds — Astrid is privileged, Cordelia was the unwanted orphan, and Letty came from a very conservative family.

I also liked that they supported each other despite each having their own lives independent of their friends and the men in the life. When they needed distractions or a shoulder to cry on or just someone to talk to, they were there for each other. Sometimes other things got in the way but there was always a reason for it and even better, the girls were aware of being unable to support the others. After reading so many books in which there’s a loner heroine with a chip on her shoulder (yet who’s always surrounded by guys!) or girls who fight each other for whatever reason, sometimes I just like being able to read those sorts of interactions in fiction. It’s a palate cleanser.

Of the three girls, I do think Letty’s storyline is the weakest in this book. I suppose it can’t be helped. With Astrid’s melodramatic antics and Cordelia’s troubles, her simple struggle to get on the stage would get overshadowed. Given the way Beautiful Days ended, I’m hopeful we’ll see more of her blossom in the next book. I definitely liked the turn of events at the end.

While I’m still lukewarm on the idea of Astrid and Charlie — all that fighting and making up must get exhausting and I still not-so-secretly hope for something between Astrid and the riding instructor at the country club — I am particularly intrigued by Cordelia and Max’s relationship. I like the push and pull of this particular couple because it makes sense: Cordelia is a bootlegger’s daughter who recently joined the family business while Max is a media darling and complete teetotaler. But the reveal at the end of the book made me root for them even while it made me terrified of what might be in store for them in the next book. Even if I hadn’t read Bright Young Things’s prologue, I’ve read your previous series. I know how these things go — one of the girls ends up dead!

I thought Beautiful Days was a great addition to this series and in fact, I liked it better than the first novel. What can I say? I prefer danger and intrigue over Romeo and Juliet star-crossed forbidden-style romance. I understand the allure, but it’s been done to death. So far, I’m on-board for the next one! B