I’ve made no secret of the fact that I have mixed feelings about the first three books of your House War series. I loved the fact they expanded on the pasts of Jewel and her den, but I also disliked that we retread familiar scenes from other books set in this universe. After the Sun Sword series, it seemed like we’d hit a roadbump. Those misgivings were assuaged with the previous novel, Skirmish, and in Battle, my doubts are gone. This is the reason I fell in love with the books set in the Essalieyan universe. 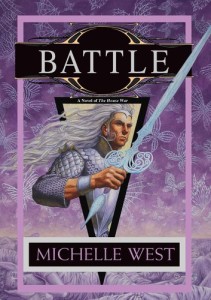 In Battle, Jewel has finally assumed the title of the Terafin. It’s been a long time coming. This has been her aim ever since her debut in the Hunter duology and it’s satisfying to see her accomplish her goal. But nothing runs smoothly in Jewel’s life, however.

Ever since Jewel’s first appearance in the books, she’s had one singular and rare gift. She is a seer. It’s the trait that earned her a place in House Terafin. The value of the gift was worth so much that when she insisted her den be accepted into the house as well, her request was granted.

Hints dropped in previous novels bear fruit in this one. We learn the seer gift is linked to more powerful, and devastating, abilities and in the far past, these abilities gave rise to great cities. In the present time, however, these abilities may be the only thing that stands between the Empire and the Lord of Hell.

This is a big book and a lot happens in it. I won’t lie. These books are epic in scope and they are so interconnected that it is a definite investment of reading time. But I think they’re worth it. The inevitable confrontation between mortals and the Lord of Hells looms closer, and I can practically see the apocalypse coming on the horizon.

Jewel has always been the Chosen One. That’s her archetype and while that’s never been one of my favorite character types, the one thing I like about her is that her Special status comes with a price. Not everyone loves her. In fact, I’d say more people dislike her at this point. In the past she’s been the target of assassination attempts from humans and demons alike. The fight for the title of Terafin was not bloodless, and there were rivals for the head seat. Likewise, demons recognized the threat she posed and sought to get rid of her before she came fully into her power. Now that her abilities have awakened the land of the capital itself, the Emperors and high priests have turned their eyes towards her.

Themes of power — how it affects people and what people do with it — have always run through your novels. It’s one of the more interesting aspects for me. And I liked that Battle acknowledges a simple fact: intentions do not matter. No one denies that Jewel means well. No one denies that she is on the side of good. She was instrumental is averting a demon invasion as a teenager, and people remember that.

This doesn’t mean she can be trusted. Having good intentions is not enough when you can alter the structures of ancient buildings, make magical trees grow where they shouldn’t, and access hidden pathways that should be forbidden to mortals. She can even walk through dreamscapes. But she does not understand how her abilities work. She cannot control them. This makes her dangerous to those who would call her ally, which raises the question of whether letting her live is worth the risk.

Battle also tackles Jewel’s one great fatal flaw. She wants to protect the ones she loves. An admirable trait but not pragmatic for the head of the most powerful House and definitely not feasible when you’re trying to stop the end of the world. People die. They die everyday. It’s just a question of when. Jewel does not fear using the near-immortals and supernatural creatures that serve her, but it’s the humans — her den — that are her weakness. And it’s becoming increasingly apparent that’s a hurdle she’ll have to overcome if she’s to succeed at what she has to do.

While Jewel is certainly the focal point of this novel, there are other fascinating revelations. We learn about the world of dreams and the cause behind the mysterious sleeping sickness introduced earlier in the series. We find out more about the Sleepers and discover (finally) Meralonne’s true identity. I will certainly say that revelation alone was huge. I’m still reeling from it, honestly.

As I’ve said, Jewel is not my favorite characters from these books but Battle did something I never expected. It made me genuinely like her. I’m now anxious for the next installment and beyond that, the coming conflict with the Lord of Hells and the end of the world. B