Several of your Regencies reside on my LOL keeper shelf. “Imprudent Lady,” “Aunt Sophie’s Diamonds,” and “Gather Ye Rosebuds” are fabulously funny. After I started and then stopped a number of other books that didn’t grab my attention by the third chapter, I scanned through my current Sony library and decided a comedy was what I was in the mood for. Alphabetically “Bath Scandal” came up first out of all your books to pick from and so it got selected. 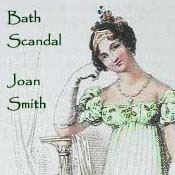 As I began reading, my first thoughts were “this is an odd duck heroine.” Actually Deborah Swann is more like a bitch and after a quick trip to The Good Ton website, I was delighted to learn that I didn’t have to try and cheer for that condescending snoot to have a HEA. Instead it’s her fiance Rawl who gets his HEA after he finally manages to slip free of her grasping claws and wins the heart of the woman he admired many years ago when he attended Beatrice’s wedding to his own cousin. Wait – that’s too complicated. Let me just steal the blurb at Regency Reads.

“Beatrice Searle, a beautiful and charming widow, agreed to smarten up tomboy Gillie Southam, because she believed Gillie’s half-brother, Lord Southam, would accompany her to Bath. But it was Southam’s straight-laced fiancée who actually inspired the move, and Lord Southam only came when rumors had Gillie involved with a disreputable fellow. Unfortunately, his lordship mistook Bea for a merry widow.”

The book takes a little while to get going and reach it’s stride. Gillie is horse mad and not entirely happy to have been force marched to Bath by her brother. Beatrice feels slighted when it quickly dawns on her that she’s been conned into “knocking the edges off” Gillie in order for the poor girl to be married off. But once Beatrice realizes the truth of the situation – that Gillie quickly caught onto Deborah’s machinations to capture Southam in marriage and that Deborah and Gillie would murder each other if they had to live under the same roof – Beatrice and the young woman cry friends and settle into a comfortable relationship. Beatrice even introduced Gillie to a HEA in the form of the slightly gauche young Duke of Cleremont who’s as horse mad as Gillie.

And thus Southam appears on the scene to save his half-sister from the rackety young man he’s heard unfair rumors about and the cat is set among the pigeons. From this point on, the plot thickens to include a trip to Bournemouth, flirting and the maneuvering of Cleremont and Southam, hurdle races, bad bets, a misunderstanding involving reputation and the bad bet, shopping,

“One bonnet is not a binge. Even two do not constitute a binge. It requires three bonnets to make a binge.”

“Yes, when they start prating of honor, you know they are about to do something ridiculous and indefensible so far as common sense goes.”

a curricle accident, a spurious duel, an undelivered apology, a fiancee’s unexpected arrival in Bath, a sulky trip back from Bournemouth, more misunderstandings, a connivance, a conge and finally HEA. I think I got that order correct.

“Bath Scandal” is not as hysterically funny to me as some of your other books. The humor is a more quiet, subtle form that makes me smile instead of busting a gut but once I realized that this is what the book would have, I settled down and enjoyed it for what it has instead of what I thought it would have. At times, I thought the plotting threatened to swirl into out of control complexity yet in the end, you reeled it back and everything falls smartly into line. Oh, and after a book length of Deborah’s evil influence, I adored that Beatrice actually tells Deborah off. That I did LOL at. B

→ Jayne
Previous article: If You Like New Adult Books
Next Post: REVIEW: The Virgin’s Revenge by Dee Tenorio