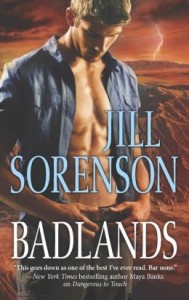 If I’m not mistaken, Badlands is the first book of yours in which characters from an earlier, unresolved storyline get their own book and happy ending. It can probably be read on its own, as the back story is well-integrated into the narrative. Still, I’m glad that I was familiar with the main characters and their past relationship beforehand.

Penny Sandoval and Owen Jackson first appeared in Aftershock, in which they were part of a small group of survivors trapped in a collapsed freeway following a major earthquake. The then eighteen year old Penny was about to give birth and was estranged from her family, who did not approve of her becoming a teen mother; Owen, who is three years older, was a prison inmate on a work detail. During the course of that book, Owen ends up delivering Penny’s baby and is the one who manages to get out of the rubble and go for help. At the end, they went their separate ways, with Penny returning to her family and Owen transferred to a new prison.

Janine, who reviewed Aftershock, felt that Penny’s bond with Owen developed too rapidly considering their backgrounds: Penny is Mexican-American, while Owen is affiliated with a white supremacist prison gang and has visible symbols of this, including a Swastika tattoo. I agreed with Janine about the pacing of their relationship, but I was able to accept that Penny would come to consider Owen’s choices in prison as not being any meaningful reflection of his beliefs. I was interested to see what you would do with these characters and their relationship.

Badlands takes place about five years after the events of Aftershock. Penny, who has stayed with her family, is a recent college graduate and a single mother to son Cruz. Owen has been out of prison for several years, and has gotten some of his tattoos removed, finished college, and worked at a national park. Penny’s father Jorge, who was the mayor of Los Angeles in Aftershock, is now the frontrunner for the Republican presidential nomination, and Owen is part of his personal security team. Penny and Owen are on friendly terms and although both have feelings for each other, neither is certain of how the other feels. In addition, Penny feels obligated to her parents and dates only men that they would approve of, while Owen doesn’t believe that he could ever have a relationship with Penny, for various reasons.

Penny is about to introduce her mother at one of the Republican National Convention events leading up to the nomination when things go wrong: an alarm goes off, and when Owen escorts Penny and Cruz to a waiting car in what is meant to be a secure area, they are attacked by a group of men who overpower Owen and the driver and abduct Owen, Penny and Cruz. Their leader is Owen’s older brother Shane, who was recently released from prison. They take off for the Salton Sea area, where Shane and Owen grew up. Penny is eventually able to overpower a guard and escapes into the desert with Cruz, and Owen manages to get away and find them. But Penny, Cruz and Owen are on their own in a harsh landscape, far from help, with almost no supplies, and with Shane and his gang after them. The kidnappers want money, and the men controlling them have their own goals.

What I’ve described so far is mostly setup, and it only takes up the first seventy pages or so. Which is probably for the best, as for me this was the weakest part of the book and required more than a little suspension of disbelief: that Penny’s father would jump directly from mayor of LA to presidential nominee, that Owen, an ex-con, would be working in personal security for him (or for anyone else), that the kidnappers – hardly criminal masterminds – would succeed so easily in grabbing Penny, Cruz and Owen at the convention, and that Owen, despite injuries from a serious beating, would be in any shape to take on the kidnappers. The quick recovery of the hero is probably a staple of romantic suspense, but one of the strengths of your books for me is that they are very believable and the heroes are not supercop/superagent/super military guys, so it seemed a bit jarring.

Once Owen, Penny and Cruz get away from Shane and his men and go deeper into the badlands, I felt that the story worked much better. Your books often have a strong sense of the southern Californian setting, and Badlands was no exception. Penny and Owen have their work cut out for them just trying to survive the challenging conditions with a five year old in tow, and Owen also makes some tough decisions as they try to evade the men after them.

Penny is wonderful – she’s compassionate and kind as well as strong, and it comes across throughout. She knows that she’s allowed her parents to control too much of her life because of her gratitude and sense of obligation, and decides to go after what she wants even if they won’t approve. Despite her parents’ disapproval, Penny doesn’t feel ashamed of the choices she’s made in her life and doesn’t feel as though she’s making a bad one in pursuing a relationship with Owen. Penny’s father did not seem to have changed much following the events of Aftershock, somewhat to my disappointment; he is still trying to impose his values and beliefs on Penny and to keep her and Owen apart. Penny loves her father and wants him to succeed, but is not blind to his manipulative side.

I think it’s fair to say, though, that Badlands is more Owen’s story than Penny’s, and he has more to overcome than she does. Owen has always been interested in Penny and his feelings have only grown stronger over the years, but he has a very low sense of self-worth and doesn’t feel like he has anything to offer Penny other than protecting her and Cruz. He had a very difficult childhood, with a father who tried to toughen him up by abusing him both verbally and physically. Owen planned to be better, but got involved in drugs when he was a teenager and eventually in his brother’s criminal schemes, leading him to prison at the age of eighteen. Being young and not physically powerful when he went to prison, Owen was a target for older inmates, whom he wasn’t able to fight off. He was raped more than once before deciding to turn to a gang in an attempt to protect himself from predators. Owen has not been able to have a sexual relationship since then, and certain things are triggering for him. He feels very ashamed of what was done to him and how he reacted to it, and this can be difficult to read at times. I felt that Owen’s experiences and their effect on him were handled with sensitivity, but one of the things he did while with the gang was disturbing to me, and he already had a lot of trauma and emotional issues to work through without it. Owen is a good man and his entire life seems to be an attempt to make amends for some of his earlier actions. He’s hesitant to get involved with Penny and their romantic and sexual relationship progress slowly, mostly closer to the end of the book, which I felt was believable.

In addition to Owen and Penny, some sections are from the POV of Owen’s brother Shane as well as Shane’s ex-girlfriend Janelle. Like Penny, Janelle was a teen mother, but with far less support and opportunities. Shane’s actions have put both Janelle and their son Jamie at risk, but while Janelle plays a role towards the end of the story, I didn’t feel that her perspective was really needed. Shane is the main villain but he’s far from a one-note bad guy. He does love Owen in his own way and tries to protect his brother even while he’s getting him involved in some very bad situations. Shane is a product of a difficult childhood similar to Owen’s, but lacks Owen’s empathy and basic goodness.

The beginning of Badlands and certain other things didn’t really work for me, but once the setup was out of the way, I became much more absorbed in the story and wanted Penny and Owen to be happy together. Although they are relatively young for the genre, I don’t doubt that they were right for each other and would be so in the future. Badlands get a B from me.