“In 1936, Frankie Foster leaves her Georgia home with high hopes of becoming a movie star in Hollywood. She soon finds work as an extra in a swashbuckling costume picture, but when the producer drops dead at her feet during filming, Frankie knows she must discover the truth if she is to save the picture and her own fledgling career.”

First let me say I love the setting. Here’s something fresh and innovative that hasn’t been done to death – at least not yet but maybe you’ll lead the charge. It’s filled with little details like living in the boarding house (what is name of the movie I’m thinking of? Stage Door of ’37! that’s it, with Katherine Hepburn), with only a cramped kitchen and one phone in the lobby for everyone to use – and listen in on when others are on it, Frankie wearing a suit + foundation garments on her train trip (ladies don’t perspire, they gleam), stockings, taxi money, the price of gas!, how the police of the day have to be lead by the hand and also worry about stepping on politicians’ toes (love how Frankie uses her judge father to her advantage – even though his jurisdiction is a 1000 miles away). Oh, and the cute “movie title” chapter openings are perfect to set up what happens as the story progresses. 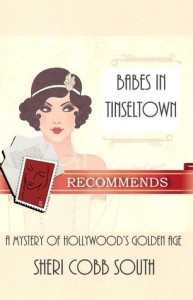 As Frankie discovers to her dismay, it’s all fake in Hollywood yet Mitch, who isn’t caught up in the magic, is the one who explains why it’s all so important in 1936 when the nation needs a bit of fun and laughter and escape from the pressing economic woes. I spent some time trying to imagine a life with only the picture shows and radio programs for amusement instead of plethora we have now.

Frankie’s character treads lightly between knowing enough about the racier details of life so that the plot can advance but not too much as to be considered “fast.” She manages to be fresh and innocent and yet also the only one willing to entertain the idea that a murder has been committed. Frankie is both her mother’s (who would be appalled at a lot of the stuff Frankie does and who she keeps company with) and her father the judge’s daughter. She’s a lady but she also is determined to see justice done and not just because it will get her anywhere in Hollywood. But then she’s already displayed gumption in defying her parents for a possible career across country and in her early efforts to get herself noticed in a town where every woman from 15-50 wants to be a star. From her actions and deductions, we can see she’s intelligent and willing to do what it takes to track down a killer but she also displays common sense when it’s called for.

Mitch is a fun character to read about. He’s got a bit of bad boy – I’m not sure Mrs. Foster will take to him very quickly – but he’s also a gentleman and abides by the standards of conduct of the day. He’s not too neanderthalish about Frankie and doesn’t get smothering or controlling. Yet he’s a man of the 1930s who wants to protect her, gets jealous of potential rivals and refused to allow a woman to pay on a date. Still, he doesn’t come across badly. I think Frankie fascinates him as she seems such a “marrying” kind and yet has little interest in doing that. Mitch sets himself up as her knight errant protector which is enough to satisfy his manly instincts without stepping on Frankie’s – or our – toes about it. He’s also as smart as Frankie and lends his own talents and intelligence to the sleuthing.

The mystery is plausible with lots of possible suspects. You develop each one just enough for the plot purposes and give each a reasonable excuse for wanting the victim dead yet don’t point the arrow at anyone enough to give the game away.

The final climactic scene is straight out of a Hollywood movie complete with a killer who has motive and a dramatic rescue in the nick of time. I don’t get mad with Frankie because I honestly don’t think she would have worked it out without that last bit of information that snapped all the pieces of the puzzle in place. Yet as I look back, the subtle clues are all there and woven into the story for us to pick up on. Mitch and, especially, the police appearing on the scene are a bit too handy but poor Frankie might not have survived otherwise. And since Mitch is the knight on a white horse where Frankie is concerned, it isn’t that much of a stretch for me to swallow it.

This is a fun, fast read. Just right for an afternoon or evening’s entertainment. I enjoyed the novel setting, a good mystery and watching the set up of a light romance between two characters who still seem to be working out their feelings for each other. I’m not sure if you plan more (though I hope so) but this one is complete on its own. B