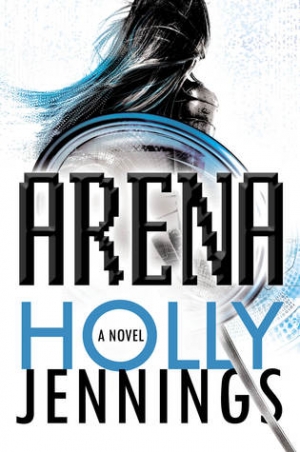 Every week, Kali Ling fights to the death on national TV.
She’s died hundreds of times. And it never gets easier…

The RAGE tournaments—the Virtual Gaming League’s elite competition where the best gamers in the world compete in a no-holds-barred fight to the digital death. Every bloody kill is broadcast to millions. Every player is a modern gladiator—leading a life of ultimate fame, responsible only for entertaining the masses.

And though their weapons and armor are digital, the pain is real.

Chosen to be the first female captain in RAGE tournament history, Kali Ling is at the top of the world—until one of her teammates overdoses. Now, she must confront the truth about the tournament. Because it is much more than a game—and even in the real world, not everything is as it seems.

The VGL hides dark secrets. And the only way to change the rules is to fight from the inside…

This book was awesome, exactly what I needed at the time. I picked it up because I saw the publisher on Twitter promoting books with LGBT characters and I figured why not. There is indeed a lovely f/f side romance, and the side characters who are a couple have pretty important roles.  I liked both girls, but what I did not expect is to like the main character so much. I have read some reviews and I totally agree that you will either love Kali or will be completely turned off by her. She has a no-nonsense attitude which for me suited her very well, considering her choice of career – professional gaming as it developed in the year 2054. Let me talk a little bit about how professional gaming developed in the world of this book.

“Video games. Once a child’s plaything. Once blamed in part for the obesity epidemic that plagued our country decades ago. Now, eSports are the fastest rising trend in history. Thanks to advancements in virtual reality, participants have to be in top physical and mental condition as the games place extreme demands on both body and mind. Tonight, you’ll be meeting one of the hottest teams in the country. But first, we’ll look into the history of gaming, how the Virtual Gaming League formed, and why these games have become so popular. Let’s just say, we’ve come a long way from Pong.”

There are several leagues of  the players and several tournaments going on – I believe one can switch between them or move up on the ladder, or do several tournaments, but I am not sure. But at least for this book the organizational specifics were not terribly important. What important is to realize is that in order to play the games the participants have to be in top physical condition to compete because a lot of what they are able to do depends on what their real bodies can do. Their avatars are basically their own bodies, even though they may still plug into virtual reality.  They also have to be great gamers – apparently when e-sports initially started the owners tried to teach professional athletes how to be good gamers and they failed. They then decided to train gamers to be in top physical condition and that was much more successful.

So basically we have a book which is not just about gaming but about a gaming industry which became a sport industry, complete with all the problems faced by professional athletes. Sponsors want to make lots of money, owners want to make lots of money, and of course gamers want to play because it is fun but also because it is very well paid work. Drug use is a problem for many athletes, but the owners try to sweep it under the rug. When Kali’s teammate overdoses, for a while the fans have no idea why he dies. Things do change for the better as the story progresses, though.

Despite what I said above, the book is lighter than I expected it to be. Yes, Kali and her friends are dealing with serious issues, but it is dealt with using a light touch. Kali’s troubles are not over when she resolves to maintain a balance in her life and goes back to Taoism, which she loved studying before she started playing professionally, but she gets much better pretty fast. She knows she will have to be careful and pay attention to her issues all her life, but it was almost, I don’t know, glanced over? Some resolutions felt too simplistic, I guess?

“And you’re not wrong with thinking that games are supposed to be fun more than anything else,” he continued. “You just need to retrain your mind to think that way. The virtual world is just for fun, and reality is the place worth living.””

I am not complaining much, this is the kind of book I needed and wanted to read, but I just want you to not expect “Hunger Games” if that’s what you are thinking about based on the blurb.

I said before that I liked Kali, and I did, flaws and all. She does have very strong voice and I thought of her as a strong character. She made mistakes, but she owned them, and I really did think she was a good captain for her team.

There is also a pretty significant romance for Kali in the story which the blurb is completely silent about, so I guess I should be too. I enjoyed their banter, and it had occasional humor, too, which I always like.

As an aside, I often like sports-themed books where the other team is an adversary but not a villain. And I liked that this is how their main competitor was portrayed here.

I think it is a first book in a series, and I am not happy about that, but I will definitely pick the second one up when/if it is out.