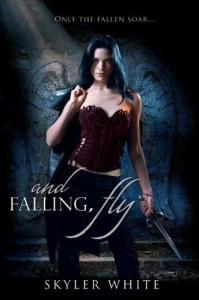 I am a reluctant paranormal reader these days. Everything seems so common that it’s hard to generate excitement.   This book came to me on the recommendation of someone whose previous recommendations had worked out for me and so I took a chance. I was so glad that I did.   This is a curious and interesting mix of philosophy and myth which takes it a step beyond the ordinary paranormal.    I wondered, at times, if it was inspired by Alice in Wonderland.

I do want to state out front that I am not sure why there is any mention of steampunk surrounding the marketing of this book.   Brass fittings and mechanical gadgets do not a steam punk make. Steampunk is a specific ouvre and using the term to describe this book is misleading and might lead to reader disappointment.   //rant over

Now that I have that out of my system, let me address the book directly.   It is atmospheric with some gorgeous prose.

"We are all broken, Dominic, all of us-‘cursed, or damned. Our fragile minds cannot span the paradox. We wish to stand out and fit in, to be unique but not alone, one with God and still ourselves."

I am going to be purposefully vague because  the way in which the story unfolds is part of the beauty.   The story is told in alternating POVs, first person from the female’s POV and third from the male’s POV.

Oliva is a fallen angel and, like all fallen angels, feeds off the blood of humans. All the vampires are the female progency of the Angel of Desire, cursed only to feel vicariously through human blood. The vampires have quills in their nails and teeth to allow for blood gathering. She is searching for a way back to heaven and believes that if she can find a man who would love her, quills, wings, and all, she can escape her curse.

Dominic is a Reborn, an ancient cursed to reincarnate every 30 or so years. In early adolescence, the reborn begin to recover their memories of their past life and generally it drives them crazy. Of course, the worst thing for a reborn is to suicide because they will relive their suicide every time they are reborn.

Dominic doesn’t belief he is cursed but mentally ill.   In this life he is a neuroscientist who is determined to discover the way to isolate memories and obliterate them.   A wealthy woman agrees to donate money to his university on the basis to further his research. She is desperate for a cure for her granddaughter who believes that she is a vampire.

Dominic posits that traumatic events can cause people to believe that they are vampires or reincarnated individuals and that if the root cause of the event can be isolated and erased, the psychosis would be cured.

"Now this isn't neuroscience, just psychiatry, but let's take, for example, an outgoing, imaginative child who believes in monsters," Dominic extemporized. "Maybe this girl is involved in a traumatic car accident. Her parents are killed, and she is thrown from the car." Now he had Madalene riveted. "The child recovers physically, but the emotional pain is so severe that she begins to dissociate. She might pretend to be incapable of suffering." Madalene nodded encouragement. "The girl might start to believe she's a monster and responsible, somehow, for the death of her parents."

Madalene was pale, and even dull Harold looked alert. Dominic's rogue imagination stretched itself. "The little girl, guilty and frightened, remembers being thrown from the car and the taste of blood, and she imagines herself a powerful, flying, insensate monster."

"Sure," Dominic took the suggestion readily. "This confabulation, tied to a trauma-related identity disruption, could become so foundational to her self-image that she might lose her ability to taste food. She starts sleeping in a coffin, develops a phobia of mirrors or crosses or wooden stakes, and becomes immune to physical pain, all in service to this explanatory story that helped her escape intolerable suffering as a child."

Dominic and Olivia meet in L’Otel Mathillide in Ireland. It’s an underground hotel for the damned: the vampires, the reborns, and every other type of “paranormal” being. But is it a hotel for the damned or a rehab center? Is it the portal to Hell where beings seek and may find redemption? Olivia’s own mental state reminded me of an addict desperate to be free of her addiction yet helpless to find a cure.

While the story makes it clear that it is a paranormal or urban fantasy, there is the underlying question of whether the curse of vampirism, reincarnation, etc. is really the product of someone mentally ill. The overarching story arc is that what you believe you want may never make you happy. Dominic wants to lose his memories but if he does so, he’ll forget Olivia and everything that she meant to him. Olivia wants to return to heaven but given the opportunity, she must abandon what she found with Dominic. I’m not sure what awaits me in the next White book, but I’m anxious to find out what it is. For those romance readers who want to know about the happy ever after ending: There is a solid HEA for Dominic and Olivia. B