I loved your debut, Ancillary Justice, and keenly anticipated its sequel. Ancillary Sword showed many of the same strengths and I liked it a lot, even though it didn’t quite live up to its predecessor. Now comes the third and final book in the trilogy, Ancillary Mercy. This book wasn’t quite what I was expecting, but I enjoyed it as well. 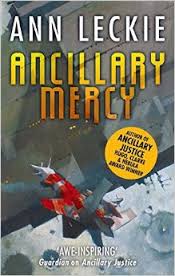 Ancillary Mercy begins shortly after the events of Ancillary Sword. Breq is still holding Captain Hetnys’ ship, Sword of Atagaris, hostage, having taken away its captain and crew. Meanwhile, back on Athoek station, a conflict is brewing between the Ychana residents of the Undergarden, and the station’s more privileged residents, led by the head priest.

The conflict is over how the now-damaged Undergarden will be repaired, and who will be allowed to live there once it is. Both the Ychana and the priesthood go on strike in protest, and Breq tries to convince the new head of security, Lusulun, that the less she threatens the Ychana protesters with violence, the less likely it is that mayhem will result.

One person, discovered in the Undergarden and taken prisoner by security, is someone Breq recognizes as not human at all: the ancillary of a ship hiding on the other side of Athoek system’s Ghost Gate, a ship that has not been seen for millennia. What is this ship’s purpose, and how can Breq get its ancillary to share information with her?

A new Presger translator, Zeiat, arrives to investigate what happened to her predecessor, Translator Dlique. Since Dlique was accidentally killed by station security, and the Presger are far more powerful than humans, this is a delicate situation which Breq tries to defuse partly by humoring Zeiat’s strange requests.

Breq has promised to be present for Citizen Queter’s interrogation and so, accompanied by Zeiat and Kalr Five, she makes the trip downwell to see if she can be of assistance to Queter. Shortly afterward, Breq’s ship, Mercy of Kalr, receives information that the Tstur Palace faction of Anaander Mianaai, who consider Breq a mortal enemy, are about to arrive in the system.

Aboard Mercy of Kalr, Seivarden has a bad breakup with her lover, Lieutenant Ekalu, after insulting Ekalu by saying she seems better than her background suggests. The breakup triggers Seivarden’s craving for kef, something the ship’s medic can only partially remedy.

Meanwhile, Breq convinces Tisarwat to use the access codes that being taken over by Omaugh Palace’s Anaander Mianaai has given her to do something most people would consider unthinkable.

Will Breq find a use for the Presger gun she has had since Ancillary Justice? Will Seivarden find happiness? While the crew of Mercy of Kalr fights Anaander Mianaai, what will happen to Basnaaid Elming and Citizen Uran on the station below? What, exactly, is the fight over the Undergarden truly about? What is the purpose and mission of the ship hiding on the other side of the Ghost Gate? And how can the threat Anaander presents be defused?

Ancillary Mercy has some the strengths I appreciated in the earlier books — good worldbuilding, the theme of justice, and the fascinating history and identity issues of Breq.

I enjoyed the early scenes, with Breq interrogating the new ancillary, trying to find someone to provide religious services during the priesthood’s strike, and debating with the head of security about the best way to handle the protests. My favorite part of the book, though, came when Breq and Tisarwat make a decision about how to best use Athoek station’s access codes.

I also loved a later scene in which Breq, expecting to die, willingly risks her to try and stop the Anaander Mianaai who came to system to take vengeance on her. I loved the way that led to Breq learning, in what I thought was one of the book’s most moving moments, what she meant to her ship and its crew.

Breq has become a more conventional character in this novel than she was in book one; less driven to right a wrong and more to protect others’ lives. She’s also no longer as tormented by what Mianaai did to her, which is good in the sense that it’s a sign of healing, but somewhat less interesting, too.

Breq’s spying on her crew through her ship’s ability to sense their emotions was finally dealt with here, but in a way that struck me as inconsistent.

I was happy that we saw more of Seivarden than in Ancillary Sword, and the development of her relationships with both Lieutenant Ekalu and with Breq was satisfying. Seivarden’s growth into a somewhat less arrogant person, and the roles Ekalu, Breq, and Mercy of Kalr had in that process absorbed me. I liked the unconventional solution to these characters’ needs for love and intimacy.

I have come to love Tisarwat’s character and I think that she may have been the most compelling figure in this book. Breq was hugely fascinating in Ancillary Justice, but as I said, here she’s become more conventional and less haunted by her losses, too.

So Tisarwat, who is still haunted by Mianaai’s actions, was more interesting to me here. She has so much to grapple with, and her struggle with self-hatred for what was done to her and what she has now become made her actions to help Breq downright heroic.

Translator Zeiat was a really fun and darkly humorous character. There was something really creative and inventive about the way she was portrayed – for example, she was conflicted over whether she was indeed Zeiat, and indicated that her personality might manifest differently with a different identity.

The ship in the ghost gate, represented through her ancillary, seemed like a character with potential that wasn’t fully explored. I was so moved by her backstory, but outside of that her cold, ironic voice was so different from that of the other AI’s that I couldn’t fully buy her as one of that group.

The resolution to the main conflict between Anaander Mianaai and Breq and her crew felt anticlimactic. I was expecting something more dramatic, like the gunfight scenes we got in the first book, or Seivarden and Mercy of Kalr showing up to save the day in book two, and what happened instead was relatively low key.

Also, in those two earlier books there was a big reveal moment that came near the end — Seivarden learning that Breq was Justice of Toren‘s last remaining ancillary in book one, and Mercy of Kalr‘s crew learning the same thing in book two. Here there was no equivalent to that. Most of the relationship developments came in the middle of the book instead, and that made the novel feel structurally unbalanced, because not much great stuff was saved for the end.

There was a little too much wish fulfillment in this book, too.

The good guys all got what they wanted; despite it being a war, not a single person Breq cared about got killed, and that scene when Seivarden and later Breq tell Anaander Mianaai in no uncertain terms what a shit she is was just too much. I’m sure a lot of people would love the opportunity to tell their one or two of their leaders off like that, but it’s a whole other thing to bring oneself to actually do it.

Despite all my nitpicking about Ancillary Mercy, I enjoyed it. The writing, worldbuilding and characterization are strong enough, and the relationship developments satisfying enough, that it earns a B, even so.