I haven’t read too many regencies lately because they were all beginning to smear together in a Duke/spy/fiesty heroine filled blur. I had Regency ennui. When I started this book, I kind of got the feeling that it was part of a series but nonetheless, I took the plunge and dove in. I also decided not to seek out any other reviews of your previous books so that nothing would cloud my judgement or color my view. After finishing it, I can understand the variety of grades as some aspects worked for me while others were tired retreads. 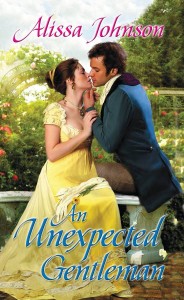 Adelaide Ward never wanted to be the head of her little family – was never trained for it – but after the death of her parents and her younger brother is imprisonment for crushing debt, she has little choice. At twenty-seven, she’s not looking for romance or passion. All she wants is a respectable marriage to a man who can support her and hopefully pony up enough money for her younger sister to have a Season, help pay off her brother’s debts and take care of his son, her little nephew George. She thinks she’s found the man in Lord Robert Maxwell, (incorrectly called Sir Robert on the back blurb) a Baron of modest means but means enough for Adelaide. She’s positive he’ll come up to scratch at the house party they’re both attending – at least she prays he will as time and her modest funds are running out.

But fate has something different in store for Adelaide in the form of Connor Brice who suddenly appears on the scene and gently romances Adelaide before deliberately compromising her. Now Adelaide finds herself with two suitors and two proposals though it’s looking like they both see her more as a bone to be fought over because of a private feud rather than a bride to be won. Connor and Robert have a long and bitter history which Adelaide painfully discovers as each attempts to sway her his way. Connor sweeps all before him and wins Adelaide’s hand in marriage but can he possibly win her trust after all the half truths he’s told or allow himself to focus on love instead of revenge?

I’ve read tons of Regency historicals and revenge plots aren’t my favorite so why did I start and keep reading “An Unexpected Gentleman?” Adelaide, that’s why. I have a thing for the quiet, unobtrusive heroine who isn’t The Most Beautiful, or The Most Outrageous, or The Most Fill in the Blank. I like a practical heroine who doesn’t expect a Grand Romance but who gets one anyway. And if she isn’t physically transformed from the brown wren she starts out as, so much the better. Adelaide might be the practical one, and she does this well, but she doesn’t want to martyr herself either. Yes, she does need to marry either Robert or Connor a) for the money, b) because Society demands it and c) because her younger sister’s chances would be ruined if she didn’t but Adelaide doesn’t rush nor allow either man to force her choice. In the end, the choice is fairly obvious but Adelaide still gets to make it. And she stands up for herself after marriage. She doesn’t cut her nose off to spite her face, she attempts to make the best of it, she goes for what she wants and is the first to lay it on the line. Adelaide is truly the stronger of the two, IMO, and she is the one I’m rooting for to get a HEA.

Now Connor has been dealt a raw deal by Robert and I can understand his driving need for revenge. What salvages the revenge plot for me is that Connor already has feelings for Adelaide even before he incorporates her into his plans. He’s not willing to call his emotions love yet but he doesn’t plan on making her life miserable just to get back at someone else. In fact, he wants to spoil her, wants to take away the burdens she’s been laboring under and wants to take on her family obligations. He’s not an asshole. He also comes to his senses about who and what is more important to him and I can almost see the pieces falling into place in his head and heart as the penny drops. He’s the one who has the furthest character arc distance to travel yet I do feel that he has accomplished this by the end.

Though this is the third (?) book in the series, I didn’t feel lost nor that the previous heroes and heroines were trying to shill their past books. There is a realistic family dynamic that ends the book which some people might not like but that I’d rather see occasionally instead of forced happy bunnies and rainbows reunions. Anything else would have diluted what went before. However I do wish that the final scene with the villain isn’t something I saw coming a mile away based on having read it so many times before. A heroine I enjoy watching get her HEA, a hero who isn’t a Duke – oh, thank God, and nary a spy in sight. Looks like there are a few single title Regencies I can manage to finish after all. B