Years ago, after reading the DIK review for “A Century of American Romance” at AAR, I tracked down all twelve of the OOP books and read half of them. I can’t recall why I didn’t continue considering how good I thought those six were but, there you have it. Reading a more recent book on Chinese immigration to the US brought this book to mind and I hunted through my house until I found my copy for a reread. Given that you’ve also written under the name Maggie Osborne, anyone who’s not happy reading about the grimmer, grimier aspects of life should probably skip this one. 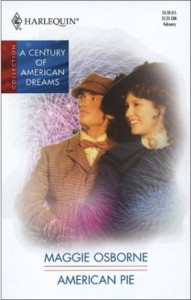 Lucie Kolska is fresh off the boat from Poland and has just successfully made her way through Ellis Island when she meets Jamie Kelly who’s only one week off a boat from Ireland. As they say in Poland, he’s been struck by “love’s elbow” at the sight of Lucie and knows this is the woman for him. Only problem is he doesn’t ask her name before they are parted and doesn’t learn it ’til after he takes on her brother in a fist fight arranged by a construction foreman to test whether or not Jamie will get a job there. He beats Stefan and thereby ruins his chances to be granted permission to call on Lucie.

Lucie starts her new life in NYC appalled at the tenement where she will live but determined to win her chance at the American Dream. She soon meets Stefan’s Polish fiancée, Greta and begins to settle into her new life. After weeks of looking, she gets a job as a laundress in a private home and is thrilled to be working 12 hours a day, six days a week to earn 80 cents a day. Kind of puts my job in perspective. The juicy gossip about her fellow servants and her employers – the daughter of the house is wearing lip color! – that she passes on to Greta is an American Upstairs Downstairs. Lucie’s wistful descriptions of the differences between the Roper mansion serve to contrast it to the squalid tenement they live in, with the beauty, sunshine and flowers making the two Polish women long for a little home of their own.

<Meanwhile, Jamie Kelly hangs on to the backbreaking job he won for himself and continues to ask Stefan for permission to see Lucie but is continually denied. He doesn’t give up though and his patience and persistence is finally rewarded. I like the quiet determination Lucie shows in the face of her brother’s vehement resistance, challenging him to let go of the limitations of the old world in which a woman has no choice and embrace the freedoms of the new. Jamie certainly has no problems with Lucie’s intelligence and desire to learn about her new country and shepherds her around NYC on their stolen Tuesday evening dates. He won my approval by not only thinking she should have an opinion but caring about it too.

Fate isn’t always kind or fair to those trying for a piece of the American Pie and all the characters have to suffer advances and retreats in their efforts to have a better life. The trials and tribulations they go through tell much of the horrors of tenement life and the job situation of the poor at that time. There’s a lot of two steps forward, one and a half back. As I said, all the nitty-gritty of it is told. The story does earn major kudos from me because the means by which the Kolskas and Jamie win their part of the American dream also not only brings them all together but cements their final transition from the limitations of their old lives and into the possibilities of their new one.

But the story is also about the love of the two couples. Love so great that it endures through all the above misery. And miracle of miracles, the characters act true to the conduct of the day. No feisty heroines or bed hopping on the side though Jamie and Lucie do chastely fog some windows. Watching Jamie and Lucie fall in love is charming.

This is not always an easy book to read for the reasons I’ve mentioned already and one other that I won’t as it’s a mega-spoiler. Let’s just say I’m glad that we have OSHA now. I once got into a discussion about it with a friend who is married to a Pole and she had a few things to say about the background of the Polish characters as well as the names used in the story but perhaps these were change to avoid confusion for modern readers. Still, reading the book is worth the effort and I’m glad I did. B