This is the second charming book I’ve read of yours I’ve read. The CEO hero isn’t a cad or bounder, the baker heroine is dedicated to what she does – and I’d love to try her strudel, the action is short, sweet and to the point and I had a good time reading it, thank you very much. 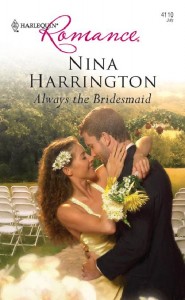 Amy Edler is a busy woman, running her own bakery and doing most of the work herself. But when her best friend’s wedding planner does a runner a week before the big day, she finds herself picking up the pieces and in charge of not only making the wedding cake but also making sure everything comes off without a hitch.

Okay so she’s not totally in charge as Jared Shaw, the entrepreneur brother of the bride, is pitching in too. As these two tick off the important details they find themselves together – a lot. And with love and wedding mania in the air, they start to look at each other – also a lot. Will romance strike and lead to another trip by a Shaw sibling down the aisle?

Amy is a strong woman who – though with PTSD from her life changing injury – has remade her career into her childhood dream. She’s working hard, living the dream, proud of what she does and also has a fun, spritely sense of humor. I love how she zings Jared at times and can also make a joke at her own expense as well as laugh with anyone. She thinks about others, cares about her friends and can roll a mean piece of bread dough. Never mess with a woman who kneads her own dough cause she can probably deck ya. She does seem to have trouble saying “no” though I admire her willingness to pitch in where needed.

Jared is driven by his past and how hard he had to work to show those who thought he’d amount to nothing more than his con man father. He also had to be the man of the house at 14 which is a tough road to hoe. He remembers the bad times and won’t let them happen again. His sister’s wedding will go off on schedule even if Amy has to be pregnant with 2 pillows to get them to the front of the line of frantic brides to get the info from the Runaway Bride planner’s office. I like how Jared keeps his past in mind but still doesn’t let it rule his life or get bogged down in angst over it.

Jared never looked to find the love of his life but when he realizes the wonderful woman in front of him – and you have made her a wonderful woman – he steps right up and decisively goes after her. But nicely. Nicely is nice. Lucy the Bride makes a lot of demands on her peeps but at least she doesn’t turn Bridezilla.

There’s lots o’ stuff crammed into the week before the wedding – it makes me almost tired just to read it -and I have to say that by the end, when thing after thing was being piled on top of things already there, I did wonder – what else could go wrong? The last event is something I’ve not seen used to finally bring a hero and his heroine to their romantic senses about how much they love each other and to stop being foolish. Who’d have thought I’d read a HEA through plumbing?

I love how Jared asks Amy to let him in her life by helping realize her dream. Aaaaahhhh. How many men can say they really know what their sweetheart’s dream is and be ready to make that happen? The final bit of last chapter + the epilogue wind things up with our two lovebirds planning to stay in one country on one side of the Atlantic with Amy’s dream in progress and the chance for Jared to pull his hair out making kids happy. Another big aaaahhh but without getting sappy.

This is a funny, happy book which doesn’t solve world hunger but does entertain delightfully. I breezed through it, enjoyed the two leads and am glad that through eharlequin, I can catch up on not only what you’re writing now but your backlist as well. B