Warning: mysqli_query(): (22032/3141): Invalid JSON text in argument 1 to function json_contains: "Invalid value." at position 0. in /home/customer/www/dearauthor.com/public_html/wp-includes/class-wpdb.php on line 2187
 REVIEW: All They Need by Sarah Mayberry
November 9, 2011

REVIEW: All They Need by Sarah Mayberry

I almost feel bad recommending another book of yours.  I feel like to continually recommend the same author time and again may read inauthentic to readers but your voice and the stories that you tell really resonate with me. I think you really know how to capture and express a modern women that feels very authentic and relatable to me despite the fact that these books almost always take place in Australia, many thousands of miles away. 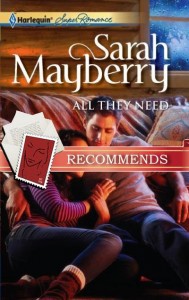 All They Ever Need is the romance of a love shy heroine and a surprised by love hero.  The interesting thing (and perhaps one of the challenges of this book) is that they don’t start out that way.  When we first see Melanie Hunter and Flynn Randall it is at a high society party. Melanie is married and Flynn is trying to avoid people wanting money from his father. Flynn muses, as he watches Melanie attempt to help a couple retrieve something from a fountain:

She was easily the tallest woman at the party—at least six feet tall—with broad shoulders that would put a lot of men to shame. Her breasts were full and round, her hips curved. As much as Flynn was wary of Owen’s naked ambition, he’d always liked the other man’s wife. There was something about Mel Hunter that al ways made him want to smile. Maybe because she was often smiling herself.

This party marks the beginning of the end of Melanie’s marriage. The smiles she had worn so often had become diminished by years of verbal and even some sexual abuse toward the end. Melanie had had enough of Owen Hunter and she leaves him. She uses her divorce settlement to buy rental cottages on Mornington Peninsula, a vacation retreat and begins the process of rebuilding her life, from the inside out.

Eighteen months later (and from prologue to the first chapter), Melanie’s divorce is final and Flynn re-enters the picture.  Only this time Flynn is bringing a girlfriend with him to stay at Melanie’s cottages while he looks at run down, but famous property nearby.  Flynn used to be a landscape architect but when his father starting exhibiting signs of early Alzheimer’s, Flynn sold his business and took up the reins of the family company.  Flynn strongly misses his connection to the earth and the lure of the once famous Summerlea estate gardens.

Whether it was his father’s illness or his own myopathy, Flynn missed the signs of seriousness of his girlfriend and he ends up hurting her fairly badly when she proposes marriage to him and he turns her down.  (I’m going to circle back to this at the end).  Flynn continues to visit Summerlea estate and during his visits gets to know his neighbor Melanie much better. His attraction to her is slow but intense and while she returns the feelings of attraction, Melanie never wants to get married again.  It wasn’t like Owen was a bad man when she met him. She had no idea he had money (they met backpacking around Europe) and they fell in love young. But Owen had ambitions and when Melanie was introduced to his circle, she never quite fit in. She was too tall, smiled too much, laughed too loudly.  She didn’t know which people to suck up to and at what points.  Her identity became so eroded during her six year marriage that the institution itself is an anathema to her.

Flynn, on the other hand, begins to see in Melanie and in their connection- their mutual love for the land, their green thumbs, their pleasure in manual labor out in the hot sun – the things that would make a loving and lasting marriage like the one his parents enjoy.  He voices his understanding of Melanie’s fear of marriage, but never really internalizes it. Perhaps he believes that the only natural conclusion to their relationship would be a permanent union.

What I expected, but did not get, was a mental acknowledgment of Flynn’s position with Melanie vis a vis his girlfriend’s position with him.  Perhaps it is because his past girlfriend never entered his thoughts anymore, even though he was pained by their breakup.  Flynn was a nice guy and was genuinely remorseful that his lack of perspicacity led to someone he cared about being emotionally hurt by his actions.

The other thing that I wanted to see was Melanie with Flynn living his Melbourne lifestyle.  Melanie’s issues with Owen stemmed from her inability to fit in and I really would have liked to see Melanie navigating the Melbourne society with Flynn.  With Flynn’s position, she would have had to make an appearance now and again. Instead, she couldn’t even eat lunch in a popular Melbourne restaurant with Flynn.

However, those two issues were not enough to bring the book out of recommendation territory.  I loved Melanie’s character (and Flynn too).  She stuck her shovel in the dirt and rebuilt her life.  She had a great blue color family and the scenes which involved her brothers and her mother (who never met a tight pair of pants she didn’t love) were totally enjoyable.  While Flynn is wealthy, much of the story is centered around Melanie’s blue color roots and her working class family.  Her father is a mechanic who owns a small auto repair shop.  They all band together to help Melanie refurbish her cottages.  Flynn has to prove to these guys he can fit in with them and I loved that turn about.

Melanie and Flynn’s romance felt very real. It didn’t happen immediately but they developed feelings for each other based on mutuality of interests and not just their strong physical attraction.  While other Harlequin Superromances leave the bedroom door only slightly ajar, that is not the case with the Mayberry books. The physical consummation of their relationship was important to the furtherance of the plot in part because while Melanie was okay with giving her body to Flynn, she struggled being emotionally vulnerable.  The subplot of Flynn’s father’s Alzheimers provided a good example of how hard a loving relationship can be but how important it is to trust and love the other partner enough to feel safe in one’s vulnerability.  B