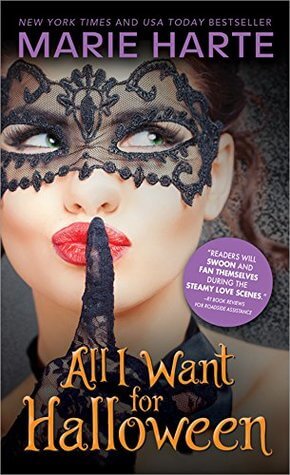 I’ve been having trouble settling to read lately and, I’ll admit, when I first started All I Want for Halloween, I had my doubts it would work for me. But I ended up being, somewhat reluctantly, charmed by Gear and Sadie, in spite of it all.

Sadie Liberato, with her brother, Elliott and her sister, Rose, co-owns Sofa’s bakery in Seattle. She doesn’t like people much and is relatively content working out and baking at Sofa’s. She prefers not to socialise much. However, for marketing reasons, Elliott insists she attend a Halloween masquerade party and play nice. She isn’t happy but agrees.

Sadie isn’t a girly-girl. She is tall and muscular, toned from working out a lot at the gym. After finding her ex cheating on her with her best friend, she has withdrawn from the dating market but decides that the masquerade might just be an opportunity to get break her sexual fast. Sadie is a curious mix of confidence and vulnerability. She is brash and forward but there are little pockets of uncertainty in her. I guess it was those things which helped me relate to her. And it was her determination to not let that uncertainty rule her which made me admire her.

Harrison “Gear” Blackstone is a custom motorcycle builder/mechanic who stumbled into his own reality TV show, Motorcycle Madnezz. He and his best friend, Brian “B-Man” Gandanna started the show, with Sahara Blankenship joining the team shortly after. Sahara and Gear were a celebrity couple and Sahara drove the “soap opera” part of the program with Gear focusing on the bikes. Sahara and Gear got engaged and the fans loved it. Then Sahara cheated on Gear with B-Man but somehow the story got turned around so that Gear was the bad guy. There was a knockdown fight between Gear and B-Man, all caught on camera of course and now Gear is leaving the show and he’s no longer a fan favourite.

All three of the Motorcycle Madnezz crew are at the same masquerade party Sadie attends. Gear and Sadie make a connection of the intimate kind and then overhear a conversation between Brian and Sahara which confirms that they are the villains of the piece and not Gear. After, there is a confrontation between the two women, Sahara slaps Sadie and Sadie punches her out. Gear witnesses this and is basically in love thereafter.

I had a bit of trouble with the way Sahara was portrayed. I am becoming less tolerant of a heroine being elevated at the expense of another woman. And I think the idea of breast enhancement being an indicator of moral turpitude should die. It was here I was thinking maybe this book was not for me.

The woman’s bright-blue eyes widened in shock, then narrowed in anger. “Slut.”
“Shrew. Or is that too big a word for your empty little head?” Sadie scoffed. “You’re nothing but a whore hanging on to fame one desperate finger at a time. Plastic boobs, tummy tucks, and Botox aren’t enough to save your never-there future.”

Sadie would have loved to have taken a hank of bottle-blond tresses as a souvenir.

Gear acknowledges that Sahara is in fact gorgeous and stylish (and her hair is naturally blonde) but I’d have preferred Sadie not to have gone there.

This happens in about chapter three however so I pushed on, hoping things would improve. They did. Once Gear and Sadie started seeing each other and the story became more about them than others, I began to see the various attractions of the characters. Neither Gear nor Sadie have particularly refined sensibilities. They’re both somewhat crass and blunt and not always politically correct. Their connection is earthy and open, both of them favouring a plain-spoken bluntness about their desires, likes and dislikes.

Instead, she took him down, all the way down, her expertise with oral something he’d one day write a poem about. And Gear didn’t do poetry.

Gear had a real number done on him by his best friend and his fiancee. In his case, he was mostly affected by the betrayal of his best friend, the relationship with Sahara having cooled sometime before the cheating. He grieves the loss of that friendship and the loss of the business he built from scratch with his hard work and skill. He’s walking away from it with a bit of money but not anywhere near what he’s actually owed. In Sadie he finds open loyalty and uncomplicated affection. Their chemistry is scorching and unprecedented for either of them.

Both Gear and Sadie have close relationships with their siblings and parents (in Sadie’s case it’s only her dad, her mother having passed away some years earlier) and I enjoyed watching their individual and joint interactions with them. The banter between Sadie and Elliott felt authentic and it made me chuckle.

“So who are you seeing now?” she asked her brother.
“No one.”
She feigned a heart attack. “Seriously? It’s been at least six days. Shouldn’t your boy parts be shriveling up from disuse?”
He flatly stared at her. “You know no one likes you.”

It was easy to see what Sadie saw in Gear. They shared the same sense of humour –

“I know who he is, Harrison.”
He sighed. “I hate that name.”
She wanted to be angrier about him judging her, but his disgust made her laugh instead. “Anyone ever call you Harry?”
“Once. Then they died.”

– and value of family and loyalty. While it was difficult for Gear to leave Motorcycle Madnezz the business, he had no conflict leaving the show. To Sadie’s vast relief, he does not want the fame and attention the show brought him and looks forward to the press moving on to the next thing and leaving him alone. Sadie helps Gear decide what’s next by focussing him on what is important to him and Gear helps Sadie take an emotional risk on their relationship. Ultimately, it was their back-and-forth and sympatico which won me over. They fit together well but there is also plenty of passion – which sometimes boils over into an argument (with resultant spectacular makeup sex). Gear knows that Sadie will keep him on his toes and he’s all in for it.

I do like a hero who makes his commitment to the heroine early and fully. Between the quirky family (Sadie’s father may or may not be connected to the mafia and Gear’s parents run a kind of steampunk renaissance fair every summer) and the earthy charm of the protagonists, All I Want for Halloween ended up in the win column for me, albeit after a somewhat shaky start.

→ Kaetrin
Previous article: REVIEW: Snowdrift and Other Stories by Georgette Heyer
Next Post: REVIEW: A Dangerous Legacy by Elizabeth Camden