REVIEW: All I Ever Wanted by Kristan Higgins

I was fairly lukewarm on your last release. I never warmed up to your heroine and I thought your hero was a bit of a milquetoast. Your stories are all told in the first person, from the female protagonist’s point of view and if the reader doesn’t like the female protag, I have doubts that particular story will work for the reader. 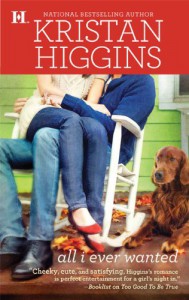 Callie Grey has been working as an ad executive for a small marketing firm in northern Vermont. She is in love with her boss and believes, based on a short affair a eleven months ago, that he is about to propose marriage to her. At. Any. Moment. (For four years). Unfortunately, Callie’s dreams are brought to an abrupt halt when Mark, her boss, announces his engagement to Muriel, the daughter of one of their biggest accounts.

When the new gorgeous, but not very warm vetinarian, Ian McFarland moves in town, Callie thinks maybe she can mend her broken heart on Ian’s sleeve even if their first meeting was inauspicious.

Where Callie’s moping and seemingly endless pining for Mark would ordinarily grate on my nerves, her self acknowledgement that Mark was her one weakness helped to take the sting away. We the readers were clued in that she was mostly “Michelle Obama” and only weak spined, emotional mooner “Bettie Boop” around Mark. Eventually, Callie has to take control of her life and her emotions but it’s a journey.

At times I felt impatient (because, of course, I knew that Ian was perfect for her but she needed to make a clean emotional break from Mark) but in a shelf full of books with instant lust, instant love, instant marriage, I really appreciated at the way in which Callie fell out of love and into love again, on her own time and in her own way. And truthfully, haven’t we all obsessed over one guy and made fool’s of ourselves at least once? I could cut Callie some slack when she was, well, a more of a take charge and competent kind of girl in most areas of her life.

Probably what helps is that the book is darn funny. Take, for example, Callie at the DMV renewing her license and talking and crying on the phone with her sister about Mark’s faithlessness:

“I ovahheard you, you poah thing,” she said. “Men can be such ahssholes. My husband, Nahman we’re talkin’ about, he sits down to dinnah one day and says he wants a d’vorce on account a’ he’s been banging the secretary down at the cremery. And this when we’ve been married fahty-two yeahs.”

“Oh, my gosh, I’m so sorry,” I said, reaching out to hold her hand. She was right. Men were assholes. Mark was an asshole. I shouldn’t be heartbroken over him. Except I loved the rat bastard. Oh, blerk!

A sob squeaked out, and Mr. Intolerant behind me grumbled. That was it. I whirled around. “Look, mister, I’m sorry if I’m bothering you, but I’m having a really shitty day, okay? Is that okay with you? My heart is breaking, okay, pal?”

“By all means,” he said coolly. “Please continue with your emotional diarrhea.”

I also felt like I understand the hero better in this book. Yes, he was the strong, silent, emotionally adverse type like so many of the past Higgins heroes (Catch of the Day, frex), but he wasn’t perfect in his silence. Ian was curt, abrupt and hard to get along with. He was actually losing business for lacking a good bedside manner. Part of it was because he was wounded by his own recent divorce to a woman he had known all of his life (and it made sense that Ian, who had a hard time making friends, would marry someone he had known for a long time).

The secondary characters were great. The secondary romance that takes place is between Callie’s mother and father who have been estranged since Callie’s father slept with three different women while her mother was pregnant with Callie’s brother.

At first, I was like Callie’s mother.   “In this house, your father was synonymous with that shithead.”   I mean, she was pregnant!   But Callie’s father was determined to win Callie’s mother back even going so far as to agree to set up meetings between the three women with whom he cheated and Callie’s mom.   Those meetings were two parts hilarious and two parts poignant.

Even a blind person can see that Ian and Callie are exactly the types of opposites that belong together. Ian needs a bit of lively color in his life, someone to draw him out of his shell and connect him to other people. (His silence in the result of shyness). Callie, on the other hand, could use someone to anchor her and she kind of pushed her way into his life. He wasn’t the type to pursue anyone, not because he was too good for women, but because he didn’t feel comfortable doing it. For all her Michelle Obama toughness, Callie’s a dreamer which fits perfectly with her chosen profession of marketing and sometimes, she would just need Ian to help her bring it down a notch.   Further, Ian wasn’t so different than Callie’s grandfather Noah, a curmudgeonly old man who made Ian look like   a charmer at times. You might say that Callie married a younger version of her grandfather, whom she loved most in the world.   (and by saying this, it would be meant in the most romantic and non incestual way possible.   Get your heads out of the gutter, DA readers!).

I actually thought the ending was both romantic and weak. Romantic in the gestures that were made, but weak in the way in which Callie and Ian’s hands were forced by contrived circumstances by Mark whose actions at the end were so out of character for him and so clearly written to provoke misunderstanding and then reconciliation. It was too cliched an ending for such a nuanced book, when so much time was given over to Callie recovering from her adoration Mark. The characters were allowed to be vulnerable and emotional and I responded to that very well. Despite some of the drawbacks, All I Ever Wanted might be my favorite Higgins book yet. B

Published by Harlequin, not one of the Agency pubs and available worldwide?