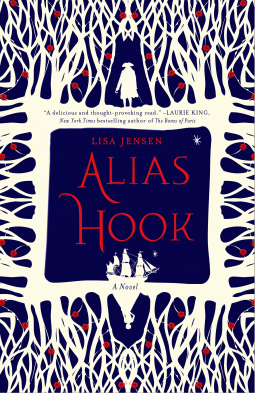 “Every child knows how the story ends. The wicked pirate captain is flung overboard, caught in the jaws of the monster crocodile who drags him down to a watery grave. But it was not yet my time to die. It’s my fate to be trapped here forever, in a nightmare of childhood fancy, with that infernal, eternal boy.”

Meet Captain James Benjamin Hook, a witty, educated Restoration-era privateer cursed to play villain to a pack of malicious little boys in a pointless war that never ends. But everything changes when Stella Parrish, a forbidden grown woman, dreams her way to the Neverland in defiance of Pan’s rules. From the glamour of the Fairy Revels, to the secret ceremonies of the First Tribes, to the mysterious underwater temple beneath the Mermaid Lagoon, the magical forces of the Neverland open up for Stella as they never have for Hook. And in the pirate captain himself, she begins to see someone far more complex than the storybook villain.

With Stella’s knowledge of folk and fairy tales, she might be Hook’s last chance for redemption and release if they can break his curse before Pan and his warrior boys hunt her down and drag Hook back to their neverending game.

When I read the blurb for “Alias Hook,” I thought now there’s a book I want to read. My reasons are base and shallow. I have to admit that before I even started the book, Hook already had me on his side for one reason – the 2003 Peter Pan movie. It’s one I had looked forward to but ended up hating because of Peter – the character and the actor. That film got me to truly understand how annoying Peter Pan is and I was totally on board for any chance at upending that little freak. Don’t judge me.

Wait, you want some flowery, literary reasons to read the book? Let me see. How about this. I find it interesting to see whether or not an author can take a villain and turn him/her around. “Can s/he do it?” I wonder or is the character too irredeemable. Good enough?

Captain James Hookbridge is a man trapped in a horrible hell of Peter’s endless childhood. His life started rather unremarkably but through a series of events which hardened him and turned him into a man with raging anger against the world, he’s ended up in Neverland care of a voudon priestess and an ageless boy who wanted real live pirates he and his unkempt, raggedy arse boys can fight against. But while Hook’s men can and do die – only to be replaced by adult, former boys whose yearning to escape the cares of life leads them to dream their way back – Hook is cursed to stay alive. He can and does get injured, including the loss of his hand to Peter’s callous blood thirst, but no matter how much he now longs for it, he can’t die.

His life is an endless drudge of trying to keep his rotting ship afloat, trying to keep his increasingly landlubber crew from boredom, tending some traps which gets them fresh game and fighting off Peter and Boys whenever Peter decides he wants to kill pirates. But Hook is also a man of intelligence, refinement, and culture. The knowledge of the new arrivals to his crew tells him that the outside world has changed in the past 250 years but he’s stuck there with no hope of seeing that.

So what is Neverland and why is Hook stuck there unable to die? Was he cursed only because of some of the – admittedly horrible – things from his past and will never escape? Is there something he can do? Or is it something he must learn? Something within himself, if only he could discover it? The story gives the answers which Hook has to find – along with the help of the only adult woman ever seen on Neverland outside of the Indians.

Hook immediately senses that somehow Stella Parrish might just be his ticket out of there if only he can piece the puzzle together. Other strange things have been happening and the fairies and Indians have mentioned a quest which must be carried out precisely. It’s Hook’s last chance.

For a man who’s lived there for over 200 years, Hook has a lot to learn but he does learn. In addition to being witty – though also frustrated with the caliber of the men he has to train as seamen and somehow keep alive – he can appreciate Stella’s likening of him to Milton’s Satan who has made mistakes but can’t bring himself to apologize to God or make amends. It’s also Stella who starts to break the established pattern of pirates v Boys. “Just say no,” she says. “They’re boys, they get bored, if you don’t respond to their silly insults and name calling, they’ll go away.”

In addition to Boy Management, Hook also starts to grasp that the other inhabitants of the island aren’t who and what he’s thought these endless decades and centuries. Some of might actually be his friends and willing to help him out of this never ending cycle and against children who don’t realize the consequences of being cruel.

The Quest and journey caught my attention from the start and drew me on. I wanted to know what it was that got Hook stuck there and how he and Stella would get away. I also loved the descriptions of Neverland and the inhabitants therein. The place has a kind of insane magic with world building rules that are pretty much abided by.

The pacing is good with a rhythm and flows of humor, danger, and pathos leading up to Hook and Stella’s escape. Stella’s final weapon wielded against Peter is inspired yet still manages to abide by the their pledge of not raising weapons against the Boys thus risking the whole Neverland – and the oasis it provides for the Indians and merfolk – vanishing. The book even manages to spare some sympathy for Pan and the awful bargain he must live with for his eternal childhood. I can even feel a bit sorry for his new fairy Kes – he wore Tinker out and aged her a 100 years with his demands – and her job of keeping him happy and Neverland going.

The ending and the price that Hook and Stella must pay in order to leave Neverland might annoy or anger some. But it does give them a fresh start while both seemed to have retained at least the valuable lessons learned if not how they learned them. By the end, I felt Hook had been redeemed after discovering in himself what he needed and yes! Peter Pan finally doesn’t have things always go exactly as the little dictator wants. Go Hook. B