REVIEW: Airs Above the Ground by Mary Stewart 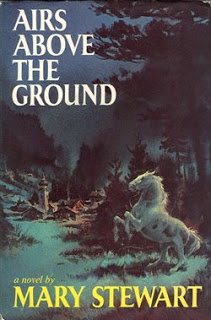 While having tea with her mother’s school friend Carmel Lacy, Vanessa March learns that her husband Lewis, whom she believes to be in Stockholm on business and with whom she had a row before he left, appears in a newsreel story in Austria. Carmel, assuming Vanessa will be joining Lewis in Austria on their belated holiday, asks Vanessa to accompany her seventeen-year-old son Timothy, who wants to visit his divorced father in Vienna.

After seeking out the newsreel for herself, a stunned Vanessa sees that a cool and collected Lewis is indeed in Austria — with his arm around a pretty blonde girl. When she receives a telegram from Lewis postmarked from Stockholm, Vanessa immediately agrees to travel to Austria. But what exactly is going on there and will they all survive the danger that ensues?

I first read “Airs Above the Ground” ages ago when I was gorging myself on Mary Stewart’s gothic contemporary novels. At the time I had no idea what the title referred to, though I would understand a bit more about that by the book’s end, and the Iron Curtain still divided Eastern from Western Europe. Yes, it was that long ago when I read it. No, don’t ask me my age.

I didn’t pick up on it when I first read the book but it seems to me that it has a more “modern heroine” feel. True it starts out with Vanessa meeting with a “woman who lunches” and who also makes her marriage a social status thing however Vanessa is a trained vet and does practice. But then she still throws in that bit to Tim that “a man’s job is his life, and you’ve got to take it as it comes and try to be as loyal to it as he is..” Hmmmmm, okay so not totally modern.

Mary Stewart had only married off a few of her heroines and the two I recall as already married to the hero were both having issues and thus separated for a while as the action starts and builds. But here, as with many other Stewart heroines who end up in danger, the hero proves himself desperately in love with her and willing to go to any lengths to see to her safety. Stewart heroes are really a cut above any revenge minded or rakishly acting ones so often seen in romance.

The whole reason behind the skullduggery would no doubt be insignificant by today’s standards but back in the day, the reward for the criminal behavior would have been more worth the effort and the cover afforded by the means employed would probably have been hard for Interpol to catch on to and break.

After Vanessa’s wild flight from the villain, and the dust up at the castle with Tim, I couldn’t help but feel that the lengthy and elaborately described car chase scenes got a touch tiresome. As a means of estabilishing Lewis’s bona fides both to Vanessa and to Tim, it works brilliantly but it could have been a hair shorter in time frame. I did enjoy the levening of the final fight scene with the crockery lamentations.

Vanessa knows early on that “something isn’t right” about Lewis being in Austria but unlike some other Stewart books in which the heroine is the one to put two and two together, here Vanessa doesn’t catch onto what’s happening until after Lewis does. I did laugh at Vanessa’s thoughts about the Man World stuff that Vanessa catches in both Tim and Lewis’s tone as they discuss things with her. It’s definitely no “Mr. and Mrs Smith” here but that’s okay as Vanessa keeps herself alive when it counts and comes through magnificently in saving Tim. And it’s certainly better than “True Lies” as it’s more realistic and so much less OTT.

Heap coals of shame on my head but I’m with Tim – and for a short time, Vanessa before she feels guilty about it – regarding Lewis’s revenge at the Gasthaus. There’s something primative yet deeply satisfying about meting out immediate justice.

I have always adored Tim in this book and how he and Vanessa get along like a house on fire. He’s definitely not there merely as a prop. Rather he’s as integral to the plot as Vanessa and Lewis. Speaking of both of them, I love the veiled/ironic humor both Tim and Lewis engage in the morning after Lewis unknowingly blows his cover to Tim with Tim being fully aware of what Lewis was up to but Lewis, also making his own sly-ish comments, being completely unaware of Tim’s knowledge and therefore not knowing he’s being tweeked.

“Airs” is a trip to Austria, told with love and an eye to the stunning countryside though Vienna isn’t as vivid in my mind as the villages, valleys, forests, fields and mountains Vanessa and Tim drive by on their way. The story also manages to pack in information about the Lipizzaners. This was my first introduction to them but I could picture everything about their grace, strength, fluidity and intelligence. They’re so gorgeous to look at.

The scene in the grazing field with the butterflies is magical. I recently read an article, I thought on the BBC, about Austrian butterflies. Of course I can’t find it now…The magic continues as the Lipizanner’s music plays and I don’t know about anyone else but I always start crying by the end of Chapter Nine. Usually I’m not much for epilogues but this is what I was waiting for throughout the whole book. Perhaps I’m more sentimental in my older age but since I knew this was coming, it was what I wanted to get to once all the thrashing, bashing and fighting was done and the cold eyed professionals took over. It’s simply wonderful to read and imagine as an old pro finds his way back home where his name is above his stall and fresh straw waiting. B

→ Jayne
Previous article: Creating a Table of Contents in Calibre
Next Post: Open Thread for Readers for August 2015