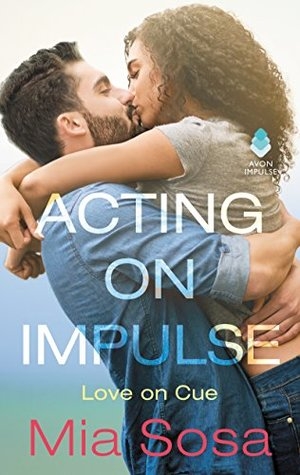 I was hooked from the very first paragraph:

I’M STANDING IN the middle of an airplane aisle, inching my way to row 12, when I spot her. I don’t know her name, nationality, age, or occupation, but I know this: Someday I’m going to marry the woman sitting in 12D.

By the end of the first page, I knew I was in good hands and settled in to enjoy my read. I always liked the characters and the humour of the book but the story veered just a little off course for me toward the end. There’s definitely a satisfying HEA which I believed in but the conflict felt a little manufactured. There was so much to love about the book however and your writing style really worked for me so I foresee many more Mia Sosa books in my future.

Carter Stone is a B-list semi-famous actor trying to crack the A-list with more serious movie roles. After a doctor he was consulting in relation to weight loss for a role as a drug addict sells private pictures of him to the tabloids, he and the doctor get into a fight. He flys to Aruba for a break to cool off and let the heat die down. The lady in 12D is Tori Alvarez, a personal trainer and gym manager who has just been broken up with via a radio interview. She’s more angry and embarrassed than heartbroken, but she too, wants to get away and consider what’s next with a cool head.

Carter and Tori don’t hit it off immediately. But he is attracted and fairly desperate to make a good impression. As it happens, they both end up at the same resort and meet again in the bar.

Tori doesn’t make it easy for Carter (who she knows by his real name, Carter Williamson – he is trying to be inconspicuous on his vacation). I loved the way she kicked his ass in so many ways.

“You have the telltale posture of a mansplainer. Body leaning forward. An elbow on the bar. The pointed finger. You were going to say something about my alcohol tolerance, weren’t you?”


She doesn’t let him get away with anything, requiring him to treat her as an equal and setting the standard from the get. I loved how confident and forthright Tori was with Carter.

Carter is not actually a jerk – he just sometimes falls into the trap of masculinity he has learned in pop culture, but he learns fast. He is deeply smitten by Tori from the start and everything he learns about her only makes him fall deeper under her spell. He is troubled by his lack of disclosure. She has reason to want to shy away from publicity after her disastrous experience with her now ex-boyfriend and Carter knows Tori is unlikely to want a relationship with a movie/TV star which will only put her in more of a spotlight. He vows to keep to the friend-zone until he can tell her the truth about him. I understood why Carter wasn’t immediately forthcoming. It made a lot of sense.

You know what they say about best laid plans though Carter.

After Carter and Tori return to Philadelphia, he tries to win his way back into her good graces. And, he does actually need to regain weight and muscle he lost for his previous role as he has an important audition coming up. I liked that Carter wasn’t super pushy about this. The way it panned out, he wasn’t the aggressive pursuer not taking no for an answer. A fortuitous misunderstanding and a couple of gym owners who like the idea of the publicity Tori training Carter could bring, results in Carter and Tori spending time together and working out their issues.

Tori still does not want a relationship in the spotlight however and Carter has to convince her he’s worth the risk.

There is an interesting subplot involving Tori’s passion for an accessible fitness program for all body types and abilities. I liked that Tori was inclusive about her passion and keen to explore options that were affordable for people on low incomes and exercises for people of different skills and that she included disabled people in her classes. I stumbled over the use of the phrase “differently abled” in the book. A year or more ago when I first saw the phrase I thought it was okay but I have since learned that it is not a term generally appreciated by the disabled community. I’ve seen a lot of Twitter threads on the topic. In fact, while writing this review I Googled “Is it okay to say “differently abled”? and the top answers were all in the negative.

Tori’s family lives in Philadelphia. Her mother and sister run a Puerto Rican restaurant. Food is such an important part of their culture and this causes conflict for Tori with her parents and sister, Bianca, as Tori’s dad has had two strokes and needs to lower his cholesterol and protect his heart and blood circulation better. Eating a lot of the Puerto Rican food he loves so much is unhealthy for him. But when Tori tries to raise it, it is seen as a rejection of her culture and a criticism of the way her mother shows her love. In the end, I thought the issue was resolved more simply than the setup seemed to suggest it could be. I doubted that Bianca could do such a fast turnaround given the way she treats Tori for most of the book.

Carter is insecure and a little suspicious about new people in his life. He has been betrayed and ripped off by a series of people, the most recent of which was the doctor who sold photos of him. While he believes Tori is not like that, he does struggle with fear from time to time. I understood why that was but I still didn’t understand why Carter did what he did. It didn’t really make sense to me and felt inorganic.

Carter’s sister, Ashley and his best friend and agent, Julian, are the romantic pairing in the next book of the series (which is on my TBR), Pretending He’s Mine. For the most part, Ashley’s and Julian’s appearances in Acting on Impulse make sense and are relevant to the story but there was one bit where Julian and Tori are talking after everything turns to custard between she and Carter. And the conversation was really unexpected. It seemed to me to be a reference to Julian’s story arc to come and nothing to do with what was actually going on. It felt shoe-horned into the book and I was a little baffled by it.

Still, those few things were not issues that ruined my enjoyment of the book. In a lesser book, they might have but there were so many great things about Acting On Impulse that I still count my reading experience as a win. I liked Tori and Carter so much and I liked the way the words flowed together on the page.

Tori rolls her shoulders forward and back, drawing my eyes to that irresistible expanse of skin on a woman’s body: the area between her collarbones. It’s a magical place. The center of a compass rose. Whether you head east, west, north, or south, you simply cannot go wrong.

I’d have liked a little more information about Carter’s career but I did believe he was in a far more settled place professionally by the end of the book and I was confident Tori belonged together. I’m also confident that I’ll be enjoying more books from you in the near future.