REVIEW: A Taste of Heaven by Penny Watson 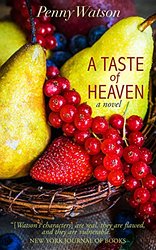 After being introduced to your work last year via Laura Florand’s guest review of “Apples Should Be Red,” I’d been looking to read more. Frankly the Santa Claus sons books didn’t call my name so when I saw this book, I jumped on it.

Like “Apples,” “A Taste of Heaven” features an older couple romance. Sophia is a widow still in the stages of grief. Her emotional life might be wretched but her food is divine and her table presentation is the bomb. She’s also got two daughters determined to help her like cubs defending their mama. Their push to get her into the competition is clearly done from love and doesn’t feel like the standard “meddling” relatives so often populating Romance books. Maybe the competition is insane but since everyone thinks she’s insane (the scene with the lawn guy is hilarious), it makes a weird kind of sense.

Quiet, reserved Sophia and Elliott Adamson (or the Grumpy Scottish Bastard as his fellow competitors call him) are like oil and water, match and dynamite, war and peace. Her presentation is divine, his sauces make you moan. But one thing Sophia is sure of, she’s not going to just roll over and play good little amateur, sweet accommodating woman – nope, this is a Challenge and she means to win it, ornery Scot or no.

Sophia is not going to back down. She’s older, she knows how to get to people, and stands up to Elliott – stepping into his space and refusing to back down. She isn’t young and inexperienced, sucking up to people for approval anymore and can play the games as well as anyone. But beyond all this, she starts to get verbally assertive towards Elliott – surprising even herself, and him as well. She has also perfected the art of not letting someone off the conversational hook, of letting silences remain uninterrupted thus forcing a person to speak what’s on their mind.

As Sophia digs into Elliott’s career, she begins to see that his façade has some cracks. Something confirmed by one of the professional chefs who knows Elliott. They start to get to each other, building a relationship first of annoyance, frustration and exasperation but also digging a bit deeper to the wounds they’re living with. They start to discover they’re both more alike than they thought though hiding. He hides his despair behind walls of anger while she prefers projecting a cool, unflappable exterior. They’re tired from the struggles in their lives.

Sophia finds that as the others criticize Elliott for his temper and his stubborn adherence to Scottish food, she’s defending him. While he, finally, is willing to admit that he needs help – her help – with the contest, thus stepping outside his comfort zone. They need to get closer, to understand each other. At first just for the contest but it’s a wonderful and realistic way to get these two characters together and on the same page. Things get heated when one of the challenges is to cook for children – something that panics Elliott but Sophia… she’s ready to take in stride and triumph. As they devise a menu for picky kids, each learns from the other and the trust deepens. Can a relationship be far behind?

One thing Sophia discovers that is on the burner is an offer for a future she never envisaged for herself. Dare she take it?

One of their challenges is not ready for vegan, or even vegetarian, or just squeamish reading. It’s in chapter Fifteen. Fair warning. Do not read this. It does show Elliott at his skilled chef best and as he tells Sophia, respect for what they’re doing coupled with efficient skill and humane technique are essential.

By the time anything sexually physical occurs, they’ve started to bond, to work together, to figure each other out and build some kind of trust relationship. They’re also older (love this!) so when they decide to go for it, I have no issues with them knowing what they’re getting into and being ready and okay with where it might lead, or not. It’s sweet though that Em and Cady are worried about their mother’s heart and totally quizzing Elliottt when they meet him.

Fair warning, Elliott is ornery at times, opinionated always and stubborn to boot. Sophia is quiet but with steel inside and she’s done with the nice girl persona. I loved her relationship with her daughters, who add spice to the end, and her spark with Elliott who needs a hard conk on the head more than once. The older romance is not done for laughs but rather is the main course. The end isn’t totally from left field – or out of the blue for those not familiar with baseball terminology – but the jump does take a leap of faith that all will go well despite the momentous changes in everyone’s lives. And do be careful of chapter Fifteen. B