REVIEW: A Study in Seduction by Nina Rowan

I admit passing this book over because lately historical romances have such a sameness to them, that I felt like I’ve read all the stories before.  However, the review at JenniferRNN’s site intrigued me and I found the book on NetGalley, allowing me to try the book out for free.

The heroine, Lydia Kellaway, is a math prodigy. She thinks of everything in terms of solvable math theorems, including the non rational concept of love. Because she can’t fathom how she allowed what she thought to be love to lead her so astray, Lydia tries to analyze it, solve the problem of it. But her working theorems are rattled when she meets Alexander, Lord Northwood. 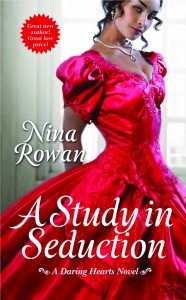 Alexander is fighting to regain respectability for his family.  His Russian mother doomed them when she ran off with a Russian lover. Two of his brothers are still in Russia and there are rumblings in Britain that the Russians pose a threat to Britain’s security.  Thus scandal and questionable alliances place Alexander’s family in jeopardy.  Alexander has two goals: marry his sister off well and pull off a magnificent display for the Society of Arts exhibition, one that he is funding largely himself.

Alexander is intrigued by Lydia whom he meets when she comes to retrieve a locket that had been pawned by her grandmother.  He hadn’t considered marriage for himself, but if he had to marry why not someone like Lydia whose intellect interests him as much as her pleasant form.

Lydia is presented as a socially awkward individual. She seeks refuge in her math at all time, often repeating math theorems in her head to calm herself. She has a limited social circle comprised primarily of her younger preteen sister, her grandmother, and a number of mathematics scholars.  Alexander challenges her but even when she would like to relent, she feels that she cannot.  Her past holds a scandal that would ruin all of Alexander’s plans.  There is a real impediment to the two of them being together so long as maintaining his position in society is important.  The barrier, however, is not revealed until late in the book and I felt that Lydia’s actions and behaviors would have been more understandable if we had been let in on the secret earlier.

A mystery subplot involving Lydia’s younger sister and an unnamed person (likely a male) adds an ominous tone to the story.  While it was resolved without harm to the young girl, I felt like the tension was forced when the reveal came about. Why now was a question that went unanswered.

The ending kind of unspooled rather quickly and while I liked the unconventional resolution, I felt more time could have been spent with both characters coming to terms with the reveal and conclusion.  There is a lot of familiar ground here, but Lydia’s character was different enough to engage my interest. I don’t know the first thing about math and I don’t think you need to understand it to appreciate the book.  B-