REVIEW: A Strong and Sudden Thaw by R.W. Day 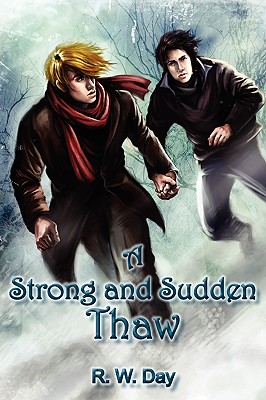 Last May, when I reviewed Wicked Gentlemen, Ann Somerville recommended some m/m romances to me. I checked out excerpts from the books she mentioned, and of them all, A Strong and Sudden Thaw stood out the most.

I purchased a copy of the book intending to read and probably review it, but not long after that, you posted that the publisher which originally put out your book in October 2006, Iris Print, was sending you royalty checks that bounced. Since you officially requested that readers not purchase new copies of A Strong and Sudden Thaw, I was torn over whether to review the book. I didn’t so much make a decision not to do it, as was enticed by the many other books clamoring for my attention, and as time passed, I forgot about my good intentions to review your book.

But this story has a happy ending. In July, Iris Print went out of business, and two and a half months ago, a new edition of A Strong and Sudden Thaw was published by Lethe Press. Readers can now purchase the book without worrying about stolen royalties.

In January, I signed up for Keishon’s TBR Challenge, and when Keishon posted that April’s theme would be “Urban Fantasy, Paranormal, SFR or Fantasy” I looked through my bookshelves and found A Strong and Sudden Thaw. Since the book is not only a m/m romance but also a fantasy/science fiction hybrid set in a post-apocalyptic Virginia, the April challenge seemed like the perfect opportunity to read and review the book.

As best as I can tell, A Strong and Sudden Thaw is set about a hundred years in the future. The land has become frozen and much technology has been lost, at least in the town of Moline, where David Anderson, the narrator of the book, lives. Because of the Ice, as it is known, society has reverted to pioneer ways, and David and his family live off the land. The family is close knit; David is the oldest of five children ranging in ages from sixteen (David) to five (his little sister, Almond). David’s maternal grandmother, whom he calls “Grandmam” (his parents are “Pa” and “Mam”) also lives with the family.

Recently dragons have appeared in the skies of Moline, to snatch a sheep here or there, but once they even snatched a baby. The people of Moline organized a posse to go after them, but the mission failed – the dragons’ scales protect them from bullets.

But that is not David’s most immediate concern. His mother, May-Marie, wants David to marry one of the girls in town, but David has no interest in this girl or in any other girl. He knows other boys his age are interested in girls, and he realizes that something about himself is different.

When a young healer named Callan comes to Moline from Florida, David strikes up a friendship with Callan, who lends him his precious and rare books, and treats Almond and David’s grandmother’s ailments with gentle thoughtfulness.

David and Callan become close, and David begins to realize he is attracted to Callan, and to dream about his friend at night. But David doesn’t believe his feelings are reciprocated, and doesn’t even realize that it is possible for two men to become lovers.

It’s not until Callan and another man in town are arrested for engaging in sexual acts (something to which David was a witness) that David realizes it might be possible for him to have the kind of relationship he has dreamed of with Callan.

There are many obstacles to face first, though: the intolerance of the townspeople, including David’s own mother, Callan’s punishement for his “crime,” the dragons, and the government, which beings to seem more and more corrupt.

A Strong and Sudden Thaw is narrated in a David’s distinctive voice. Here is the opening paragraph:

There’s an old scenic view about halfway up the mountain, alongside where the old highway runs. The signs are fading, of course, and the pavement’s cracked and ruined, invaded years ago by roots of the scrub pines reclaiming what men stole from them back in the Before. There used to be a fence, a low barrier of iron-grey metal put up by the old people, but it’s gone now too. My mam always told me not to lean on that fence, and she was right, because one day late last summer, after a torrential rain that left us all knee-deep in cold black muck, that twisted fence went right over the edge. Just following after our world, I guess, plummeting over the edge into the abyss. Or at least that’s what Grandmam says, and she ought to know, as she remembers the Before times. She tells stories that make the old world sound like spun sugar candy you get at the Harvest Fair. Rich and sweet, but destined to crumble away at the first hard rain.

The narrative voice of A Strong and Sudden Thaw is one of my favorite things about it. Another is the way the characters, both major and minor, come alive.

David is wonderful, and I loved the way that despite his relative ignorance of things like history and politics, you showed that he possessed a lively intelligence. He is also courageous and honest, so much so that I sometimes feared for him. Callan is less distinctive, but very sympathetic, a gentle, educated, bright and caring man who clearly loves David.

David’s family members are also very memorable, from the fairy tale telling Grandmam, who remembers the days before the Ice and shows more tolerance and understanding of David’s love for Callan than most of the other characters do, to David’s father, Brock, a deeply honest and honorable yet pragmatic man, to David’s siblings and his mother, May-Marie, a religious woman who believes that physical love between men is wrong but loves her son very much nonetheless.

Many of the townspeople are also distinctive, so I was very impressed with the thought that went into creating each and every character.

The fantastical element is introduced at the beginning of A Strong and Sudden Thaw but it soon takes a backseat to the relationships and the story of the town’s intolerance toward Callan’s sexual orientation. Eventually though, the dragons make their presence in the story felt in spades, and the focus of the story shifts somewhat, though not entirely.

The book is quite suspenseful, so much so that I peeked ahead to see how things would turn out for the two heroes, something I almost never do. It was also, to me, reminiscent of both the later Laura Ingalls Wilder “Little House” books, because of its focus on a pioneer-like community’s survival, and of the movie version of “Brokeback Mountain,” because of the censure David and Callan face from their community, and the way they have to hide their feelings for much of the story.

David and Callan’s initial falling in love happens very quickly, and I would have liked for it to be drawn out more. The conflict is mainly an external one, the fact that their relationship is forbidden. I liked that the book didn’t take the simple way out most of the time, so I was a bit disappointed in the resolution to David and Callan’s difficulties, which seemed a bit too easy.

A bigger problem for me, though, was the age difference between the two heroes and the way it was never addressed in the book. When things first get physical between them, David is sixteen and Callan twenty-three, and that seven year age gap bothered me. I have mixed feelings about it because in many ways David’s youth is necessary to the book’s coming-of-age story aspect.

I realize that David was a mature sixteen year old, and Callan a young twenty-three, but I was still uncomfortable. I think that if David had been even a year or two older, or if Callan had been younger, or else if the age difference had been discussed by the main characters, I might have not been so uncomfortable with it. But the only time the age difference came up was in the context of the narrow-minded side characters who felt that Callan had corrupted David and turned him gay. While I have no doubt that David was gay before he ever met Callan, I would have liked to see the age difference debated or at least acknowledged without being attached to homophobia.

For that reason, I can’t endorse A Strong and Sudden Thaw as strongly as I might otherwise. I’m not sorry that I read this original and well-written tale, I just wish that my enjoyment had been wholehearted. B for this one.

This book can be purchased in trade paperback from independent bookstore near you or ebook format at AllRomanceEbooks and other etailers.