REVIEW: A Recipe for Reunion by Vicki Essex 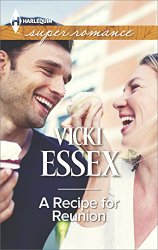 Nothing about working with his former high school crush, Stephanie Stephens, is ideal. Still, if Aaron Caruthers intends to save his grandmother’s bakery, he must. Good thing he has a lot of ideas he can’t wait to implement. He never imagines Stephanie would have her own ideas for the business. Or that they would clash with his!

It doesn’t take working with her long for Aaron to realize his impression of Stephanie as a helpless ex-cheerleader is way off. And the more of her kindness and strength he sees, the more attracted he is! Now to convince her…

I was eyeing one of your other books before Sunita, my reading twin, beat me to the punch and reviewed it. One day, I vowed, I’m going to try this author. I like “second chance at love” plots, hadn’t read a Harlequin Superromance in a while and those cover models looked so happy about those cupcakes that I decided this was my chance.

This could have turned into the oh-so-common romance trope of returning to a small town, by-gawd determined to save the [insert Whatever needs saving] even as the hero and heroine shrug off what their long standing feelings about the other and find love at the end. The way it’s written, however, works much better than the generic blurb would leave me to believe.

Steph has some judgemental, picky, snob friends who don’t appear to value her much but there’s a reason for that. After a disappointing school reunion, she sees that she needs to change and she goes about doing that despite some “issues” which will become clear as the story progresses. She moves out on her own, takes pride in having sought her job and that she does it well. She’s learned things about herself and is seriously trying to put those lessons into practice.

When she decides to take what she thought was Aaron being insensitive about the fact that she hasn’t graduated from high school and let that motivate her into getting her HSE (high school equivalency degree), Steph shows a lot of inner strength. She knows it will be hard for her and that she will need encouragement to keep her from getting frustrated. Then she seeks out a helper and starts to investigate the process.

Meanwhile Aaron moves back in with Gran. He could have come off like “Oh, noble me for doing this” or “I can’t believe I’m giving up a law career in Boston for small town NY” or any other angry or martyred response. Instead he seems genuinely happy to help his beloved grandmother and determined to see that her life’s work stays in the black and open for business. Always one to plan ahead, he’s already got an idea to put into action to increase business. He also doesn’t get away with any nonsense around her and lovable Gran is willing to jerk a knot in him when she thinks he needs it.

Both Steph and Aaron have old, preconceived notions about the other which they’re initially not ready to jettison. Their history is a long and unhappy one. So how are you going to get them beyond the past and into a future?

The story is of flawed characters dealing with change. Neither Steph nor Aaron are perfect, they’re both not only hauling baggage of their own and that each caused the other. There’s no quick fix or easy way past these things and both will, at times, regress and return to old habits just because it’s the easier thing to do. I also like that Steph and Aaron appear to be products of their past and upbringing. Their present actions seem realistic and organic rather than suddenly manufactured for the moment. He can be judgmental and she can be defensive and they aren’t always nice to each other.

It takes them a while to work through the present issues as well as their past ones. There’s a bit of snobbery on both sides – she is horrified to realize that at times she’s sizing him up to see that he’s not the “loser” he was in high school while he is equally dismayed when he acknowledges that he’s always judged people by the amount of education they’ve got and, despite his past crush on her, has seen Steph as pretty but dumb.

Two people who will also come in for some criticism are Steph’s parents. It’s nice that they are so supportive – even if smothering – of her and she’s always and forever their princess but really! I was gobsmacked at what they didn’t do. They had their excuses, and not having been in this situation, maybe they thought they were doing their best. They did hire some help for Steph but to hamper their daughter that way is mind boggling.

I’m happy that in the end, Steph ends up wanting more than she’s settled for in life and decides to pursue her HSE for herself and that Aaron seems to have loosened up and is looking at the half full glass instead of panicking at the half empty one. They’re learning to accept/see the other as they are and were – to shed their old beliefs. Love doesn’t fix everything and life isn’t immediately perfect. The progress can backslide and be painful but it’s more believable to me for all that. Now if only there’d been a kitchen love scene in there reminiscent of the movie “The Baker” or “Assassin in Love” as it’s sometimes called. B